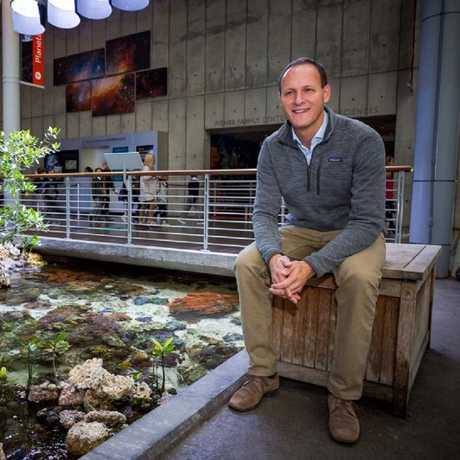 I’m interested in the ecology and evolution of tropical reef-building corals, from close to the surface to well into the twilight zone. As a molecular ecologist, I combine genomics and field ecology to understand how corals diversify and adapt to different environmental conditions. Much of my research has focused on studying genetic patterns “across the reef slope” (over depth), piecing together the evolutionary processes that have led to those patterns, and inferring how those patterns impact the interconnectivity of shallow and deep reef habitats.

The research in my lab at the California Academy of Sciences depends on an approach we call “reefscape genomics”. Leveraging massively-parallel sequencing and advances in underwater imaging and georeferencing, we study the genetic and phenotypic variability in natural coral populations, and document how they are distributed across the reefscape. This allows us to infer underlying ecological and adaptive processes, and ultimately evaluate the natural capacity of these populations to adapt to changing ocean conditions. Our current efforts are focused on a new initiative based in Curaçao (Southern Caribbean), where we established 35 large genotyping plots around the island that we will be studying in detail over the coming years.

Another focus is to bridge the gap between museum-based systematics and “transect-based” field surveys. Our understanding of scleractinian coral biodiversity on tropical reefs has been greatly hampered by the difficulty of field-based taxonomic identification, lack of informative genetic markers, and the emerging pattern of overwhelming cryptic diversity. As such, despite major climate-related impacts on coral reefs, it remains unclear how coral biodiversity is affected and whether certain species are driven to (local) extinction. Supported by the Academy’s Center for Comparative Genomics, we are therefore exploring the potential of minimally invasive, genomics-based approaches to study coral diversity, and tackle current methodological bottlenecks that prevent us from understanding how climatic and local stressors are affecting coral reef biodiversity.

Much of our research involves comparisons between shallow and mesophotic reef environments. Mesophotic coral ecosystems have remained largely unstudied, even though they are widespread and often occupy large areas. By extending most of our research to mesophotic depths, we aim to characterize how the ecology and trajectory of mesophotic communities differ from those of their shallow-water counterparts, and evaluate their vulnerability in the context of increasing human pressure. To conduct research at these depths we are strongly dependent on the Academy’s Scientific Diving Program, providing us with the support to safely utilize closed-circuit rebreathers.

Originally from the Netherlands, I completed my undergraduate degree at Utrecht University and master’s degree at the University of Amsterdam. After that, I spent twelve years in Australia studying the Great Barrier Reef, starting with my doctoral dissertation and followed by different research positions at The University of Queensland. This included two memorable years at the remote Heron Island Research Station (where I also photographed coral behavior, as seen on bioGraphic and BBC News). After that, I led the “Deep Reef” component of the XL Catlin Seaview Survey, a global survey and outreach initiative to document the world’s coral reefs, in partnership with Google and Underwater Earth. Prior to joining the Academy, I was a DECRA Research Fellow supported by the Australian Research Council, leading a research program focused on the Great Barrier Reef’s mesophotic coral ecosystems.