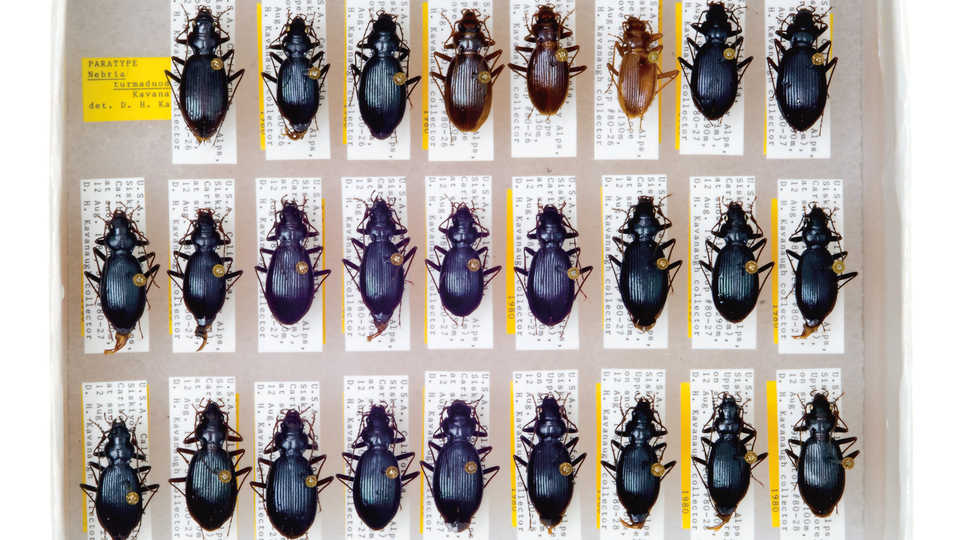 After collecting these specimens in August of 1980, Kavanaugh used them as the basis for describing a news species, Nebria turmaduodecima.

Academy entomologist Dave Kavanaugh never intended to embark on a climate change study in the summer of 2008. But the beetles he’s been observing and documenting for more than 40 years left him little choice.

In the summer of 1968, Dave Kavanaugh set off on a hike that would change the course of his life. As a second-year medical student at the University of Colorado, he had joined a climbing club with a few members of the biophysics department, and the group had set their sights on Gray’s Peak—the ninth highest mountain in Colorado. Kavanaugh, who has never been able to do anything slowly, scampered up to the top of the peak in record time and sat down to wait for the rest of the group. As he peeled an orange and gazed out at the surrounding terrain, a sudden movement caught his eye. A small black beetle had crawled up onto his boot. While most climbers would have ignored (or possibly squashed) the small intruder, Kavanaugh whipped a collecting vial out of his pack—beetle collecting had been a hobby ever since he took an elective entomology course in college—and scooped up the rare specimen. He had never seen it before in Colorado, and as he learned when he got back to campus, neither had many others. There were only two previous records of the species in the state. “That was it,” says Kavanaugh with a grin. “I was hooked.”

The next year, he left the medical field to pursue a career in entomology. After earning a Master’s degree from the University of Colorado, he enrolled in a Ph.D. program at the University of Alberta. Selecting a specialty was easy—he chose to focus on beetles in the genus Nebria because, as Kavanaugh says, “they live where I like to be—up in the mountains.” Over the next few years, Kavanaugh scoured mountainsides from Washington to Wyoming and beyond in search of Nebria beetles. During the summer of 1971, he lived in a professor’s camper, logging over 25,000 miles and collecting beetles from more than 400 different sites. By the late 1970s, he had exhausted all of the vehicle-accessible options and began backpacking into more remote regions, including Oregon’s Wallowa Mountains and the Queen Charlotte Islands. When he arrived at the Academy in 1978, Kavanaugh was already the world’s foremost expert on North American Nebria beetles.

Mostly mountain dwellers, Nebria beetles are perfectly adapted for a life in frigid climates. Enzymes in their bodies have evolved to function at very low temperatures, allowing them to stay active when other animals would shut down. The beetles also produce a chemical that works like antifreeze to lower the freezing point of water, preventing their bodies from freezing solid even in subzero winter weather. During the day, these cold-adapted creatures stay safe from predators—and the heat of the sun—by hiding under rocks. At night, they emerge from their hideouts and crawl onto nearby snowfields and glaciers to feed on other insects that have been stranded on the snow. Many scientists might have preferred a study subject adapted to slightly warmer climates, but Kavanaugh seems to be just as comfortable in the cold as his beetles. “Fifteen below is actually pretty nice,” he laughs. “It’s 50 below that you want to avoid.” After many months in the mountains over the course of his career, Kavanaugh has documented 85 North American species of Nebria beetles, 43 of which were new species that he named and described.

When Kavanaugh first started collecting beetles, DNA sequencing work was barely in its infancy—the practice did not begin to pick up steam until after the Human Genome Project was launched in the late 1980s. Once DNA sequencing became an affordable tool for evolutionary biologists and taxonomists, it changed the science of specimen collection and storage. Most entomology specimens had historically been pinned and stored in drawers, making it easy to measure and compare specimens. However, in order for insect specimens to yield valuable DNA data, they must be stored in alcohol or another preservative. To get the most possible information about a particular species, entomologists now need to prepare specimens both ways.

By the time the Academy moved into its new home in Golden Gate Park in 2008, Kavanaugh had the largest and most comprehensive collection of dry, pinned Nebria beetles anywhere in North America, but he was missing DNA samples for a number of the species he collected early in his career. And so it was that more than 30 years after his first major cross-country quest for Nebria beetles, Kavanaugh set off on another epic adventure, retracing his steps in search of DNA samples for each of the species in his collection. Between June 22 and August 20 of 2008, he revisited 67 collecting sites in the mountains of eight different states. He had dutifully written down the exact location of every specimen he ever collected, so he knew exactly where to look. The problem was that the beetles were no longer there.

“I have a whole new perspective on change now,” says Kavanaugh as he sits in his office a few months later. “I was completely unprepared for the amount these habitats had changed in the past few decades. In some places, I found that the picturesque mountain stream I remembered was now a ski resort. Perhaps more startling, I realized that in many areas the tree-line was moving up the mountain and the glaciers were retreating.” Because of their snowfield hunting practices, most Nebria beetles live above the tree-line, favoring barren rocky patches where they can run without wading through tall grasses or shrubs. However, the altitudes that once provided them with ideal rocky habitats now often host lush forests or meadows—and the open snowfields that were once extensive are now often gone.

Kavanaugh’s first stop on his DNA mission was Sonora Pass in the Sierra Nevada range. In 1981, he had described a new species from the site, which he named Nebria sonorae. The next year, he collected dozens of these beetles from a stream bed at an altitude of 9,025 feet. However, when he returned to the exact spot in June of 2008, he couldn’t find a single specimen. With the light fading, he didn’t have time to hike up higher, but he vowed to return and continue his quest. Two months later, Kavanaugh made a second trip to Sonora Pass, starting his search at 9,025 feet and working his way up the mountain. “I turned over every single rock along the stream on the way up,” says Kavanaugh. “I found a lot of other things, but no Nebria sonorae.” After hiking all day, Kavanaugh had finally decided it was time to turn around when he got to the base of a small waterfall. There, at an altitude of 9,250 feet, he found 11 Nebria sonorae beetles that had washed down the stream and accumulated at the base of the falls. “These guys were more than 200 feet higher than they were back in 1982, and their actual habitat was probably much further up the mountain,” says Kavanaugh.

As he traveled to collecting sites in Oregon and Colorado, Kavanaugh realized that his Sonora Pass experience was not an isolated incident—it was part of a trend. In 1983, he collected specimens of two new species—Nebria wallowae and Nebria labontei—near Glacier Lake in Oregon’s Wallowa Mountains. Both were collected between 6,500 and 6,700 feet. When he returned in August of 2008, he had to hike to an altitude of nearly 8,150 feet before he found them. On Quandary Peak, in Colorado’s Rocky Mountains, he collected Nebria suturalis beetles at altitudes as low as 11,700 feet in 1968. In August of 2008, he hiked as high as 12,400 feet but could not find a single specimen. He had to go to neighboring Mt. Evans, to heights of 13,100 feet and above, before he finally found Nebria suturalis again.

Closer to home, Kavanaugh found more startling data in the Trinity Alps, a few hours north of San Francisco. In August of 1980, while leading a Boy Scouts trip for his son’s troop, he had collected a new species, later named Nebria turmaduodecima, on a large snowfield near Upper Caribou Lake at elevations between 6,900 and 7,500 feet. This August, the snowfield at Upper Caribou Lake was nonexistent. Kavanaugh asked one of his graduate students, Sean Schoville, to visit nearby Thompson Peak to see if the species might still exist at higher altitudes. Schoville was indeed able to find Nebria turmaduodecima at an elevation of just over 7,900 feet. However, the glacier on the north face of Thompson peak, which was once one of the largest glaciers in California, is now calving. If the glacier breaks up and recedes, the winter snow accumulation will melt more quickly in future years, perhaps eliminating the last remaining habitat for Nebria turmaduodecima.

During the last Ice Age, Nebria beetles were much more widespread. As the climate gradually warmed, they moved higher up into the mountains and populations became increasingly isolated from one another. Although their range is now much smaller than it once was, these tough predators have survived a great deal of change. However, they may now be running out of room to move. “Some of the things I saw this summer shocked me,” says Kavanaugh. “Perhaps it can’t all be blamed on climate change. It’s possible that some of the forestation I witnessed was part of a natural forest cycle. But there’s no question that the beetles are moving higher up the mountains. And where I used to find hundreds of them, I’m often now finding just a handful—or none at all.”

Kavanaugh has received funding from the U.S. Fish and Wildlife Service to continue documenting the shifting ranges of four different species of Nebria beetles. He will also begin to analyze the DNA from the samples he collected this summer, confirming—and possibly adjusting—the evolutionary relationships he has hypothesized based on decades of dissection and microscope work. As the beetles’ habitat continues to shrink, these specimens, and the data they hold, are now all the more important to future generations of scientists. 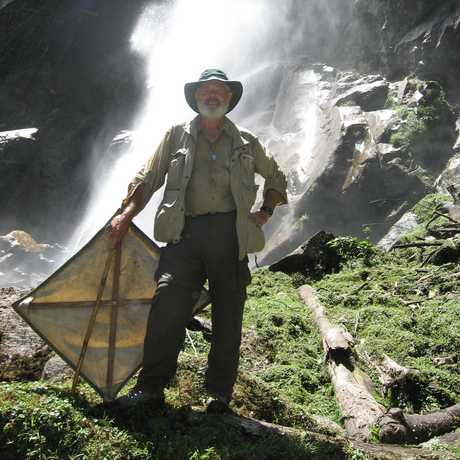 The Academy holds one of the four largest entomology collections in North America, containing approximately 10 million curated specimens representing all orders, nearly all families, and approximately 250,000 species of insects, myriapods, and arachnids. Meet the researchers, explore projects and expeditions, and more.