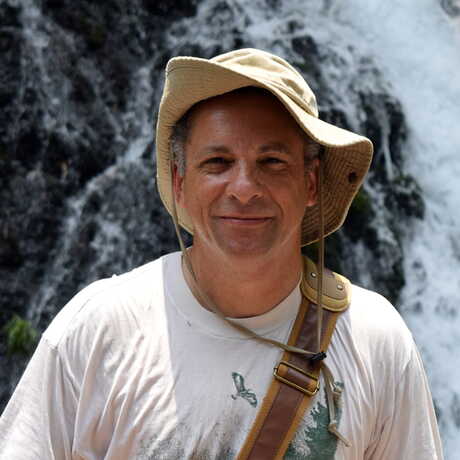 I am the Curator of Geology, and I've been at the Academy since 1999. I hold degrees in Biology (B.Sc.), Oceanography (M.S.) and Geology (Ph.D.). My research is transdisciplinary, with a focus on understanding the evolution of ecological systems, emphasizing paleontology, deep time, and perspectives on complexity dynamics. Most of my research these days centers around global change biology, and how we can further develop our understanding of Earth's past ecosystems to better forecast our future.

I was born in the United Kingdom, and grew up in the beautiful countries of Jamaica, and Trinidad & Tobago. I earned my Ph.D. from the University of California Davis, and later became a citizen of the United States. I am a strong supporter of immigrants, broad inclusivity of all persons in American society, and the promotion of underrepresented groups in the sciences, including women and ethnic minorities.

Roopnarine, P. D. and A. A. Dineen, 2018. Coral reefs in crisis: The reliability of deep-time food web reconstructions as analogs for the present. In Marine Conservation Paleobiology. Carrie Tyler and Chris Schneider, editors. Springer. ISBN 978-3-319-73795-9

Goodwin, D. H., A. Cohen and P. D. Roopnarine 2010. Forensics on the half shell: A sclerochronological investigation of a modern biological invasion in San Francisco Bay, United States. Palaios, 25: 742-753.

Roopnarine, P. D. 2001. A history of diversification, extinction, and invasion in tropical America as derived from species-level phylogenies of chionine genera (Family Veneridae). Journal of Paleontology, 75:644–658.

Roopnarine, P. D. 2001. Testing the hypothesis of heterochrony in morphometric data: Lessons from a bivalved mollusk. In Zelditch, M. L., editor, Beyond Heterochrony: The Evolution of Development, pages 271–303. John Wiley and Sons.

Roopnarine, P. D. and Vermeij, G. J. 2000. One species becomes two: The case of Chione cancellata, the resurrected C. elevata, and a phylogenetic analysis of Chione. Journal of Molluscan Studies, 66:517–534.

Roopnarine, P. D. and Beussink, A. 1999. Extinction, geographic replacement, and escalation of the bivalve Chione in the Late Neogene of Florida. Paleontologia Electronica, 2(1). 24p.

Roopnarine, P. D. 1997. Endemism and extinction of a new genus of Chionine (Bivalvia: Veneridae) bivalve from the late Neogene of Venezuela. Journal of Paleontology, 71(6):1039–1046.