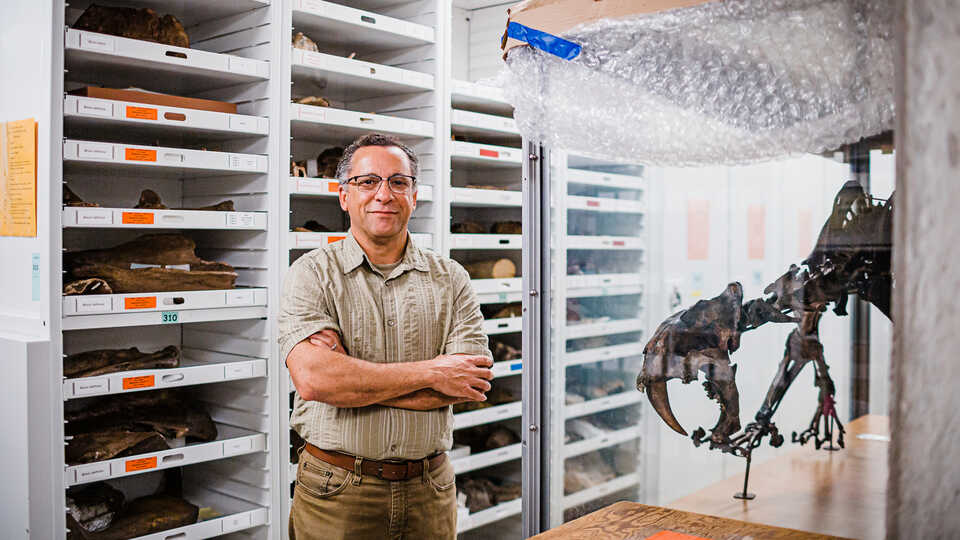 Dr. Peter Roopnarine is the Academy's Curator of Geology and a world-renowned expert on paleontology, deep time, and the evolution of ecological systems. 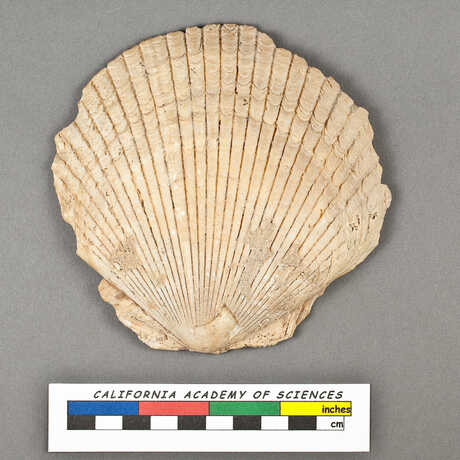 Dr. Peter Roopnarine is pretty lively for someone who studies mass extinctions.

With a contagious smile and a lilting baritone that betrays his Jamaican and Trinidadian roots, the paleontologist exudes a warmth that might seem at odds with the sober seriousness of his field of study. But perhaps cultivating this kind of serenity is necessary when investigating the cataclysmic events of Earth’s past—and deducing how they might foretell our future.

Born in the UK, Roopnarine and his family moved to the Caribbean when he was a baby to be closer to his extended family, including members of the long-established Indian diaspora in Trinidad. It was a charismatic high school biology teacher who kick-started Roopnarine’s fascination with the natural world, taking the class on swashbuckling field trips to offshore islands and mysterious mangrove swamps. The young Roopnarine was overwhelmed by the abundance and diversity of marine and terrestrial life on his adoptive island, realizing that “we might very well know less about biodiversity than we do the atom.”

Roopnarine’s problem-solving prowess helped him subtract two years from his high school tenure: At 16, he headed off to college on an island of a very different sort—New Brunswick, on Canada’s rugged Atlantic coast—to earn his bachelor’s in biology. Feeling the pull of warmer latitudes, he completed his master’s in ocean sciences in Florida before moving on to California for his doctorate.

What’s in a name?

As he began his PhD in paleontology, Roopnarine began asking big questions about evolution and biodiversity—and found answers in small bivalves. Mollusks like clams, oysters, and mussels were treasure troves of evolutionary data, stubbornly persevering through over 500 million years of global cataclysms and mass extinctions, leaving behind strong fossil records as tantalizing time capsules. By studying these organisms that have endured through the eons, Roopnarine saw how even small geological events could have huge implications for whether life flourishes or fades away, and a set of questions materialized that would come to define his research: “During and after extreme environmental events, how does the biosphere work—or fail to work? How does biodiversity grow, how do we lose it, and how do we recover it?”

As the scope of his work evolved and expanded, his official designation did, too: Roopnarine joined a growing cohort of paleontologists who started calling themselves “global change scientists”—a new moniker that makes it clear that, for paleontologists, bones are just the beginning.

To understand ecosystems that existed millions of years ago, Roopnarine models them, using information from the fossil record and filling in the blanks with correlating data from modern communities. He creates food webs—maps of what eats what, and then what eats that—to track the thousands of predator-prey interactions within a community, and then introduces an extreme environmental event and measures the ecosystem’s response. “A food web is the most important map of interactions that we have,” he says. “Energy is consumed, reused, recycled, and everything runs on that.”

Running millions of complex models about ancient food webs isn’t just an esoteric academic exercise: “If models can explain what we know happened in the past,” Roopnarine explains, “there’s a pretty good chance that they’re going to predict what’s coming in the future.”

The importance of being an optimist

One thing’s for sure: When it comes to our current rate of habitat destruction, species loss, and global warming, there is no earthly precedent. Our planet is no stranger to extreme environmental events, but most previous mass extinctions (the Chicxulub asteroid impact being the glaring outlier) unfolded over thousands or millions of years—not decades. Having seen the effects of climate catastrophe play out in the fossil record, Roopnarine is an outspoken advocate for a stronger, stricter approach to reducing carbon emissions. "While I am very pleased to see many of the presidential candidates embrace fixing the climate crisis and setting hard targets for emissions reduction," says Roopnarine, "what matters most is what happens after Election Day. Be bold! Be brave!"

When asked if he’s optimistic about the future, Roopnarine deftly steers the conversation away from abstraction and toward actual data. “Throughout the history of life on Earth,” he explains, “ecological communities are very frequently tuned toward robustness.” During a mass extinction event, the weakest “threads” in food webs disappear, and the center holds. In other words, ecosystems—like those hardy bivalves from his doctoral research—may be more resilient than we initially thought. This resilience, however, is ultimately contingent on humankind’s ability to reverse climate change. If we can’t rein in our self-destructive tendencies, we can’t depend on natural systems to bounce back.

While he’s circumspect about branding himself as an optimist, Roopnarine lets his gift for perspective speak for itself. He notes that “human societies have shown time and time again our capacity for rapid, radical changes within ten to twenty years. A lot of positive things have happened in the last hundred years on the planet that nobody could have predicted.” Perhaps Roopnarine’s next model can. 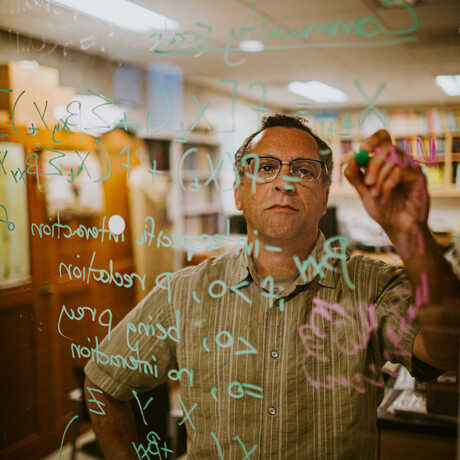 Who is your science hero?
Lee Smolin. He currently has a huge influence on my own work, and I think his Darwinian approach to science is somewhat underappreciated in his own discipline [physics].

What is your favorite fossil in the Academy’s collections?
Kitty, our nearly complete skeleton of a California saber-toothed cat (Smilodon californicus). It’s a beautiful specimen. I love thinking about humans entering this landscape and encountering these crazy animals not even that long ago!

What is your favorite creature on exhibit?
Our giant Amazon catfish in the rainforest exhibit. I used to visit the Academy to see them years before I ever worked here.

What was the most surprising or unexpected result from one of your food web models?
That at many times in the past, real food webs would have been more stable and robust than millions of equally complex, but hypothetical food webs that we generate mathematically. This is a strong hint that evolution and ecology shape not only individual species, but even ecosystems.

Any words of advice for future scientists?
Be persistent in everything you do.