The Academy's penguin colony has long been a visitor favorite. It’s a rare day when you don’t find a large group transfixed by its charismatic residents, all members of the endangered African penguin (Spheniscus demersus) species. Over the past six months, the colony has welcomed four chicks, the newest additions to one of the institution’s longest and most successful breeding programs. Since 1983, all penguin chicks hatched at the Academy have been part of the Association of Zoos and Aquariums (AZA) Species Survival Plan. Institutions participating in this initiative aim to maintain the species' genetic diversity in captive populations through collaborative exchanges and strategic breeding.

Protecting Penguins
Factors driving the decline of the African penguin population are a sadly familiar list: overfishing, water pollution, invasive species, and habitat destruction. Commercial fishing has significantly decreased the penguins’ main prey, and hungry parents are often forced to abandon their chicks. The busy shipping lanes off the coast of South Africa are also a problem; in 2000, a massive oil spill impacted 40 percent of the penguin population. Feral cats have also taken their toll, as has the harvesting of guano for fertilizer, since it removes the penguins' primary burrow-construction material. Only 10 percent of the original wild population of African Penguins—a million, as estimated in 1930—remains, and unfortunately, numbers continue to decrease by 2 percent each year. An even more sobering fact: Of the 17 species of penguins on Earth, 10 are currently considered vulnerable or endangered.

In response to these threats, the Academy and 48 other AZA-accredited institutions participate in the African penguin Species Survival Plan and manage around 800 penguins among them. The member institutions regularly “trade” penguins in order to maintain valuable genetic diversity in the captive-bred population.

Supporting Wild Populations
In fall 2014, Academy biologists Vikki McCloskey and Crystal Crimbchin traveled to South Africa to assist with the hand-rearing of penguin chicks abandoned by their parents and introduce them back into the wild. They worked with SANCCOB, a leading marine conservation organization that works to rescue, rehabilitate, and release populations of abandoned seabirds, especially threatened African penguins. It also facilitates the funding of projects that support the South African government’s Biodiversity Management Plan for the African penguin. SANCCOB’s studies place the rate of survival of hand-reared chicks in the wild as comparable to chicks raised naturally, an encouraging statistic for those working hard to reduce mortality rates and strengthen breeding colonies for the future. Already, the organization has rehabbed tens of thousands of penguins affected by oil spills, illness, injury, or abandonment.

As a public museum and aquarium, the Academy has the opportunity to raise awareness about biodiversity—and contribute to critical conservation efforts. Read more about our Captive Breeding Programs.

Our African penguin colony just grew by two—say hello to our newborns, hatched the first week of November! 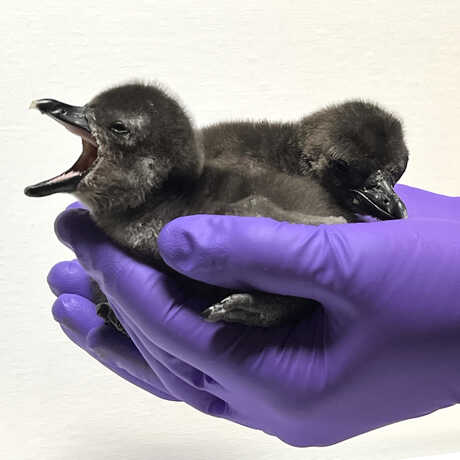 The Academy's breeding programs help contribute to Species Survival Plans and critical conservation efforts all over the world.