When it comes to echinoderm collagen, there is always a catch 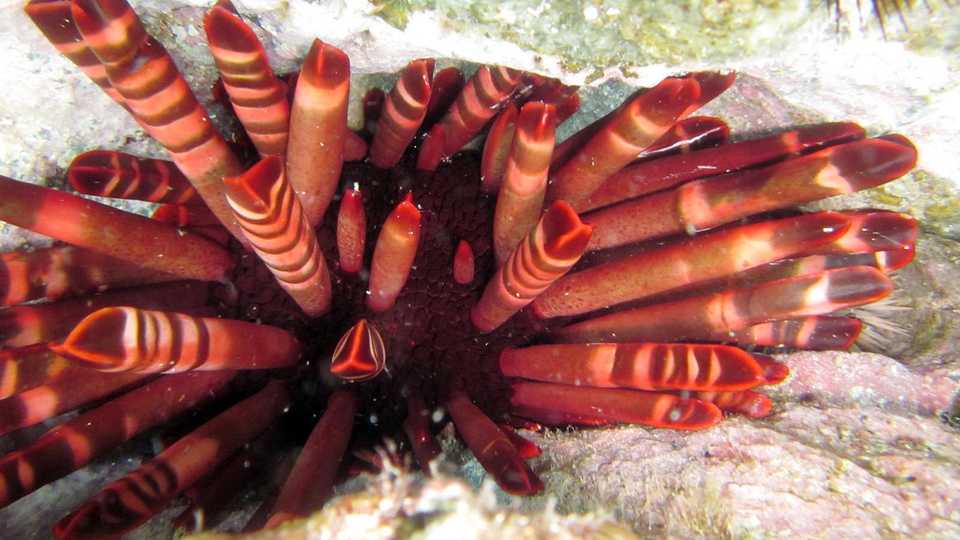 I was taught a lesson in self control the other day, while snorkeling in an area that had lots of rocks. In between the rocks were lots of crevices, and in those crevices we found some of the most magnificent of all the sea urchins. The self-control of the sea urchins (which I will talk about in a moment) inspired self-control in me with respect to scientific collecting as well.

The aforementioned magnificent urchin goes by the mellifluous name of Heterocentrotus mamillatus. That is the correct spelling of the species name. Some of my colleagues might be tempted to put an extra "m" in there to make it "mammillatus", but that is not what the original author of the name, none other than Carl von Linné (a.k.a. Carolus Linnaeus) himself, had in mind back in 1758. The reference is to more or less the same mammalian attribute in either spelling, but there are nuances of the usage that have to be respected, and Linnaeus knew that. He was nothing if not a smart guy who knew his human anatomy. He wanted the mammalian reference in the name because when cleaned of its spines, Heterocentrotus mamillatus displays the most beautiful of smoothly domed, glassy spine tubercles that reminded him of... well, a certain mammalian attribute. Maybe he had spent too much time in the field. The big, heavy spines of Heterocentrotus sit neatly on end, one spine over each of these tubercles.  Think of balancing a baseball bat on a half-buried baseball. In the base of the spine is a neatly polished little hollow, or socket, making a finely honed ball and socket joint that any car mechanic would greatly appreciate. To think that this piece of urchin machinery, with its very fine engineering tolerances, is made basically of limestone is simply to wonder at it all the more.

At this point I feel it necessary to mention that you might have encountered these spines, minus the urchin, in various tropical places where a certain type of wind chime might be offered for sale. Turns out that when a Heterocentrotus spine is gently tapped with a hard object, such as another spine, it sounds with a gentle ring that some find pleasing to the ear.

Frankly, I am not a fan of wind chimes of any kind. The only place I have these big spines installed in my lab in San Francisco is in the form of my "Acme Echino Quake Detector", which is a strange composite "decoration" that hangs from the ceiling with my hope that it will jangle in time to warn of the next "big one". Otherwise, I don't think the natural and soothing sound of any breeze that would activate a set of wind chimes needs any enhancement whatsoever, as the breeze has its own kind of auditory beauty. Humans can be strange animals sometimes.

Before people get upset, I should also chime in that Heterocentrotus spines for the "wind music" industry are not usually harvested from the living animals.  When the urchin dies, hopefully after a long and happily productive life (however that is measured by urchin standards), the spines remain so durable that they wash up in large numbers on certain beaches, where they can be picked up and employed in the noble noisy cause described above.

The genus name, Heterocentrotus, is in reference to these incredible spines, which come in two basic varieties: big and strong, and small and stubby. You can see these in the close-up below: 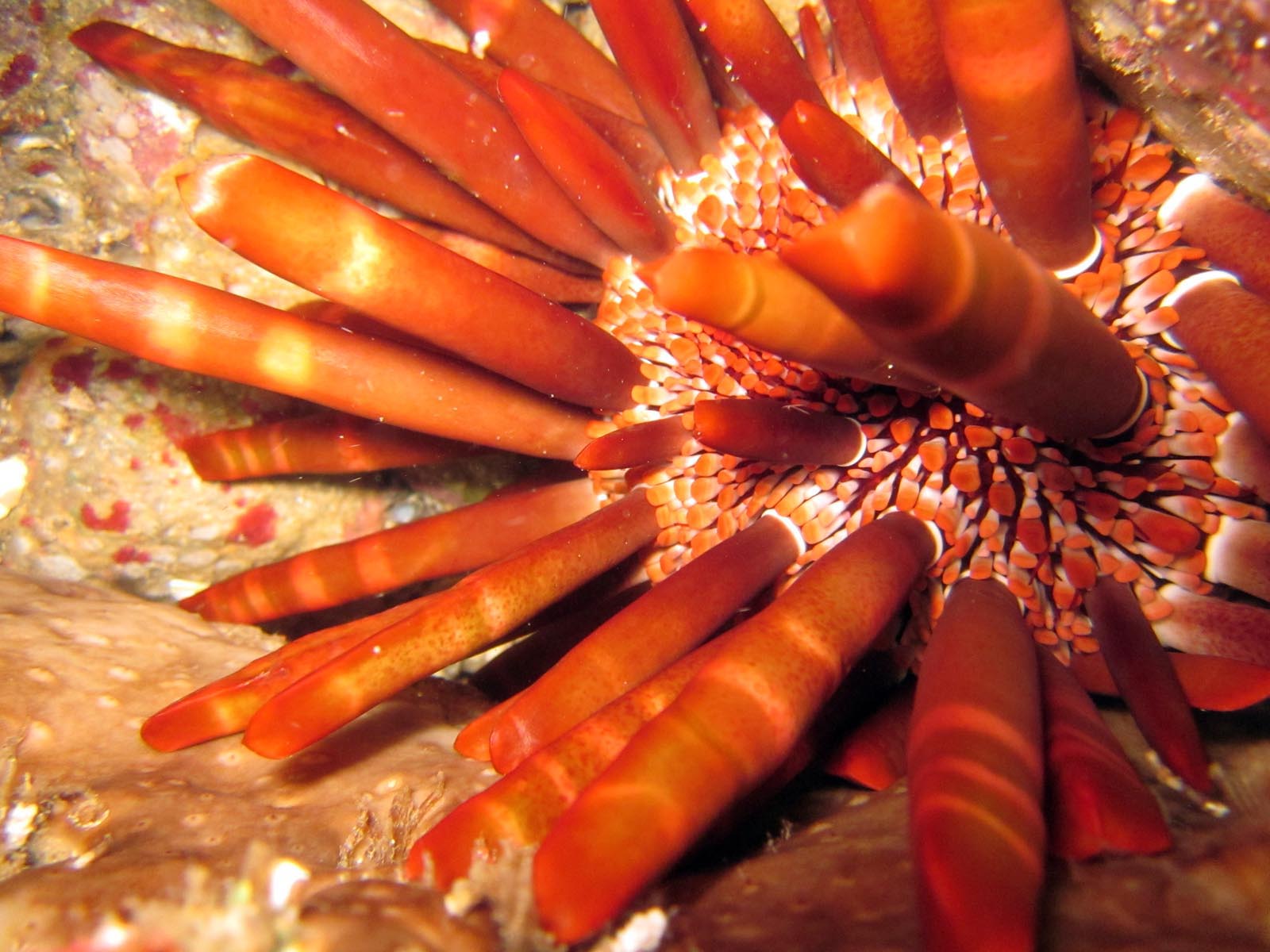 "Hetero" means "different", so this urchin is named for the fact that is has two very distinct types of spines. As I've said before, I love it when scientific nomenclature makes sense. But if you really insist on a common name for this creature, you could call it the "slate pencil urchin". Does that feel better? In my opinion, it shouldn't.  There is a reason that biologists coin scientific names. How many of you out there have ever encountered a "slate pencil" in this day and age of electronic gadgetry? Would you even recognize one if it flew up your nose and did the lambada? Heck, even pencils come in mechanical form now, and not to write on slates either. And just to make matters worse, sea urchins in a completely different order, the Cidaroida, are also called "slate pencil urchins". So much for common names.  Heterocentrotus it is. It's really not that hard after all. If a 5-year-old can remember "Triceratops", an adult can surely come to grips with "Heterocentrotus".

Speaking of grips, Heterocentrotus is nearly impossible to remove from its stony home. Actually, make that fully impossible, at least without dynamite, a crowbar, or otherwise hurting the poor thing. The primary reason for this is in the spines, which are, appropriately enough, called primary spines. As I mentioned, primary spines sit on a ball and socket joint. They are held down to the urchin's skeletal test by a ring of muscle that can be differentially contracted around the ring to point the spine in different directions. This is a handy attribute to have if you are nearly spherical, and want to point your spines at an incoming enemy, or to wedge yourself into a crevice in the rock. However, muscles are metabolically expensive to run, and sea urchins are not what you would call physiological dynamos. So there must be something else going on to keep these animals in place 24/7, safe from dislodging by waves, predators, or marauding echinodermologists.

Turns out that inside the ring of muscle is a second ring of connective tissue, which is not muscular, but composed of a connective tissue made of collagen. This tissue is ubiquitous in animals, and is usually used to connect muscles to bone, or bone to bone, amongst other uses. In the case of the sea urchins, the collagen is found in a ring just inside the muscular ring.  I've shown this in the diagram below (which I have modified from a couple of images in Clarke and Rowe, 1971).  In this diagram, all the spines have been removed except one primary spine, so that you can see the connection to the surface of the body, or test: 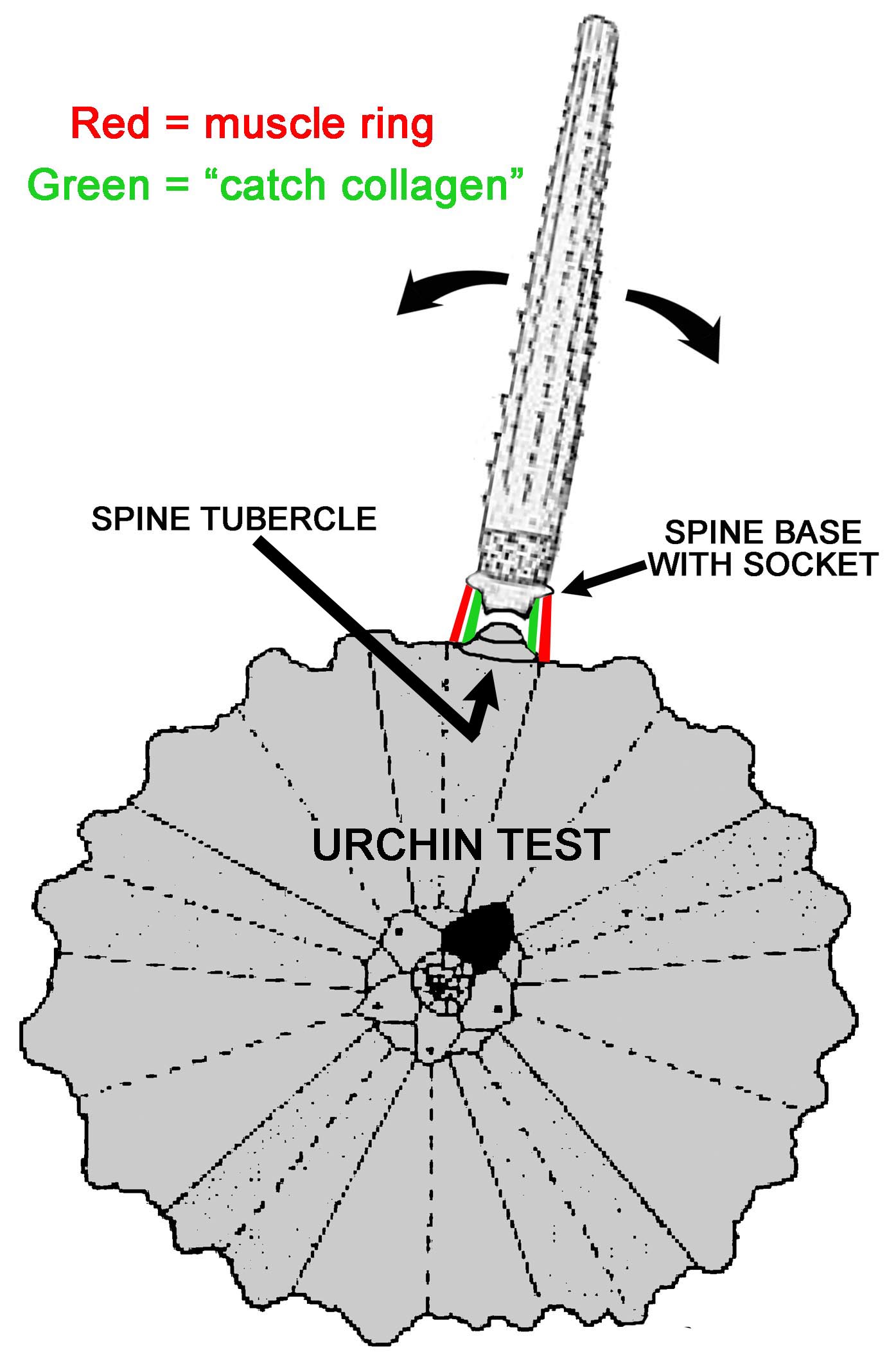 The collagen in this inner ring is rather special -- it's so-called "catch collagen". It's stiffness is under voluntary control by the sea urchin, probably through nerve action. When the urchin wants to move the spine, the collagen ring becomes soft and pliable, allowing the muscles to place the spine... just so... perhaps to brace against the rocky wall of a cozy reef nook or cranny. Then the urchin stiffens the collagen in the inner ring, effectively locking the spine into position. The muscles can now relax, and ta-da! A powerful brace is in place in the space with energy of zero trace. With a bunch of these spines employed in this way, the urchin simply canNOT be dislodged without breaking something -- usually the spines. But in the case of Heterocentrotus, the spines are so big and so powerfully built, any prying force strong enough to make the spines move away from the rock wall usually ends up breaking the urchin's test. And that is truly a shame, given just how beautiful this animal is.

A few other last words about catch collagen. This substance is part of a group of such tissues in echinoderms known generally as "mutable collagenous tissues". These have been found in all the major echinoderm groups. In fact, alongside the special stereom version of calcium carbonate used to make echinoderm skeletal elements and basic 5-part symmetry in adults, I would list mutable collagenous tissue as a unifying characteristic of the phylum. In the body wall of a starfish, for example, mutable collagenous tissues can be softened to allow the animal to glide neatly over uneven surfaces, then stiffened to lock the animal into place in an infinite number of what look like the most awkward poses that would be the envy of any acrobat. Such staying power, with no energy output! In sea cucumbers, we have arguably the most extreme usage of mutable collagenous tissues. The entire body can soften to allow movements into the tiniest of holes and cracks, yet stiffen again in an instant to hold the front end of the animal up to filter feed with elevated tentacles around the mouth, or wedge the animal into a small crack.

Okay, I lied. There is one more thing I wanted to add. Turns out that there is at least one other place where similar mutable collagen can be found. This is between the pelvic bones of human females (and perhaps other mammals). One of the many hormonal changes that happen in women during child-bearing is the softening of this connective tissue to loosen the bones in the pelvic girdle, allowing them to move a bit relative to one another. With a 10-pounder in the womb, many women have been the perhaps unknowing, yet ever-so-slightly happier beneficiary of collagenous tissue softening. With all that yelling going on, most women aren't thinking about that during the joyous occasion of childbirth, and who could blame them?

(Almost) all of this ran through my head as I looked at Heterocentrotus locked into its home, and after a few attempts to brute-force them out of there, I gave up. It felt like picking the rarest and most beautiful of flowers in the woods with a weed-whacker.