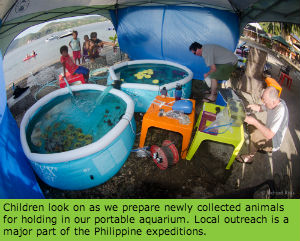 When I tell people that we're in the field collecting saltwater animals for display and research at the aquarium, most of them imagine that the actual catching is the hard part. In reality, the hard work starts after we collect the animal.

Keeping animals healthy in the field—and then healthy while en route back to Manila for a 14-hour flight to their new home in Golden Gate Park—entails an entire slew of life-support equipment (LSS). We have that stuff at the Academy, obviously, but right now we're out in the field. Where it's too hot. Where there isn’t a store to buy what we need. Where we have to constantly battle a continually moving colony of fire ants that appeared right where we set up our equipment.

Fortunately, all the pre-planning we did to prepare for this is paying off. Want the laundry-list of what came with us on the plane? Two 200-gallon inflatable kiddie pools (plus a third, just in case), 220-bolt air and water pumps, rolls of tubing, nets, containers, coral-holding devices, fish-holding cups, seeded biofilters, and an assortment of valves, glue, patch kits, rubber bands, cable ties, etc.

We knew we'd need to keep water temperatures down in the pools so the animals could survive (from 94 degrees to a reasonable 82), so our original plan was to give the pools water-changes every few hours, which would have required many trips hauling 5-gallon buckets of water 30 feet back-and-forth from the shore. Luckily, our hosts were able to find a powerful sump pump and modify it so it could stay in the ocean while plugged in. We were also able to connect the two pools via four siphon hoses, basically turning them into one body of water. Then we able to fabricate drains in the pools, which gave us not just cooler temps, but also stronger water flow—much better for the shallow-water corals (which are, as the kids say "money"), two coconut octopuses, and selection of fish we're caring for (which includes ghost pipe fish and white mushroom coral pipefish). And today we're going to attempt to collect pigmy seahorses. 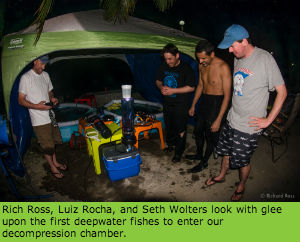 Many of the fish collected deeper than 300 feet have a gas-filled swim bladder. When they're brought to the surface, the pressure on them decreases and the gas in the swim bladder expands in the same way a sealed bag of chips does when you take it on an airplane. When the bladder expands, it can damage the internal organs of the fish—which is, well, very bad for the fish. Traditionally, collectors have used a hypodermic needle to relieve pressure from the swim bladder, but that's a less-than-optimal solution, resulting in unreliable survival. To combat this problem, we designed and built a fish decompression hyperbaric chamber based on some larger designs that have been used for collecting cold-water rock fish. Our design is light, relatively portable, and the collection chamber itself doubles as the decompression chamber. The deepwater team collect the first deepwater fish yesterday, and our chamber is working very well.

Tomorrow morning, Aquarium Team One heads home to the Academy with the live animals we've collected. Packing and shipping them is a story in and of itself, which I'll try to write up on the plane. Next week, Aquarium Team Two arrives for more collecting with a focus on the deep-water fishes. I'm looking forward to getting home, unpacking the animals, and seeing what the second aquarium team achieves next week.