The morning of my flight to Príncipe was dark and wet. The rain was pouring hard and steady while thunder rolled in the distance. The Omali Resort Manager informed me that the 9 AM flight would likely be delayed and that he would call me when he had more information. About an hour later at 9AM the Manager called my room and said the flight was on. He gave me a lift to the airport and dropped me off in front of what appeared to be an abandoned airport. If you stumbled upon this edifice you would assume it was a 20th century ruin; rusty rebar poking through decayed concrete walls, the hint of a long faded emblem on  the side, a crumbled sidewalk that melted into the muddy dirt road, and nobody to be seen.

The openings of where doors once swung led into various rooms with no signage. I wandered around moving from abandoned room to abandoned room until I stepped into a room with a woman sitting behind a table pecking away at her phone. She looked up at me, pointed to where I had just come and barked something at me. I had a good idea that she wanted me to leave, so I did. I walked back out to the crumbled curb and noticed a few people walking towards the building.

After about 15 minutes there were 6 other people with bags looking like they had travel plans.  Soon a flatbed truck showed up hauling a half dozen men who all jumped off the truck as it rolled by. The truck never actually stopped, once all of the men were off the truck it continued on down the muddy road and disappeared into the jungle. The men dispersed into various rooms and started various construction activities including jack hammering.

I stood there, the only white guy, feeling quite out of place. I had no idea what was going on, was there a flight leaving for Príncipe? Was I in line for a different flight? Was this a bus station? Totally clueless and I am sure it showed. All the other folks clutching bags seemed at ease chatting on their phones.

Finally, the barking woman appeared and barked again and everybody and their bags followed her into one of the rooms. She had each of us put our bags and then ourselves onto a scale with a giant dial that spun around a couple times then slowly waddled back and forth until it settled on a number. While keeping her eyes on her phone, she pointed to a door and barked at me again. Behind this door was a rusty conveyor belt that carried my belongings into a big white box that resembled a fallen junkyard refrigerator. I was asked to walk through a metal detector and was handed my belongings as I exited. I glanced over to the dead refrigerator looking for some kind of monitor that might reveal a shoe bomb or underwear explosive, but saw nothing.

The seven of us ended up in a fairly typical terminal, lines of bench chairs and even some VIP-looking sofas. There was a closed duty-free shop with heaps of booze and other rubbish commonly sold at modern airports. There was a flat screen TV above the entrance to the duty-free shop tuned to some French channel.

I will attempt now to share with you the horror of this otherwise reasonable waiting room. As I entered the waiting room, I was greeted with what sounded like a bullhorn amplifying a news broadcast. I actually stopped in my tracks looking to escape this horrible ruckus. I quickly realized it was the TV and surmised that it most certainly was turned up to 11. It was deafening. I moved to a seat as far away from the noise as possible. Incredibly, the other passenger sat in a row only meters from this horrible wall of sound and immediately stared up at the TV, where they stayed like statues for the entire time we were trapped in this prison. Out of nowhere sprang a playful cat that began doing figure eights around my legs. As I reached down to scratch the cat I was startled out of my seat by the sudden pounding of a jackhammer, which must have been just on the other side of the wall from my seat. I looked around the room and the TV zombies did not flinch from their collective objective of becoming deaf. I certainly couldn’t sit here. I moved to another seat that was equally far from the TV and the jackhammer.  I looked up at the TV and realized that not only was the volume so distortedly high that no one could possibly understand it, but also that the satellite signal was so choppy that the dialogues was stuttered and totally undecipherable or watchable. WTF were they looking at?  I sat trying to find some way out of this room. I set my bags on a chair and wandered back to the door that lead me into this torture chamber.

I slowly pushed the door open and leaned into the adjoining room only to see the barking woman sitting next to the fallen refrigerator glaring at me. I tried to stare back at her, but she intensified her squint and leaned slightly towards me, I quickly retreated back into the chamber fearing another barking episode. I resigned back to my seat and absorbed the wall of sounds hoping it would end soon. Of course, there were no monitors with flight info or someone to ask what the hell was going on. I sat with my head in my hands for over an hour until finally the barking woman stepped in front of the screaming TV, put her hands on her ample hips and moved her mouth as if she were speaking, but I heard nothing over the TV. She scanned the room, caught my eye, she seemed to give me an extra stare and may have furrowed her brow at me, then strolled back through the door. Nobody moved or said a word.  I had no idea what was going on, how long I would have to endure this hell, or if I was even waiting for the right flight. I began to believe that I knew what the guy in the Turkish prison from “Midnight Express” felt like.

I aimlessly strolled around the terminal trying to get my mind off of the noise.  I even ambled between the zombies and the stuttering bull horn to test their reaction, none. I peered into the duty-free shop to see if I could find the most expensive item.  The current exchange rate is about 17,000$ dobras per US dollar. I think I spotted a large bottle of  Cointreau for $1.2 million dobras, awesome! For whatever reason, the terminal cat had been following me around the terminal. BTW, this cat would occasionally join the zombies and watch the TV (see photo). Just as I was contemplating a confrontation with the barking lady to escape this nightmare, she emerged from the door strolled to the TV and turned it off and made an announcement that got the zombies to grab their bags and rise to their feet. The sudden silence revealed that the jack hammers had also been silenced, something one would expect to notice while watching TV at a sane volume. 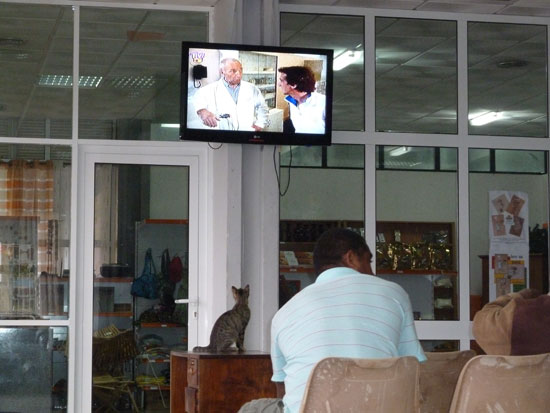 Phew, we were now boarding this twin prop plane with two rows of seats that seated about 14 people. I was seated, naturally, next to one of the propellers. The pilot fired up the engine and the propellers began to spin, under normal circumstances I might have described them as deafening, but I could barely hear them over the ringing in my ears. 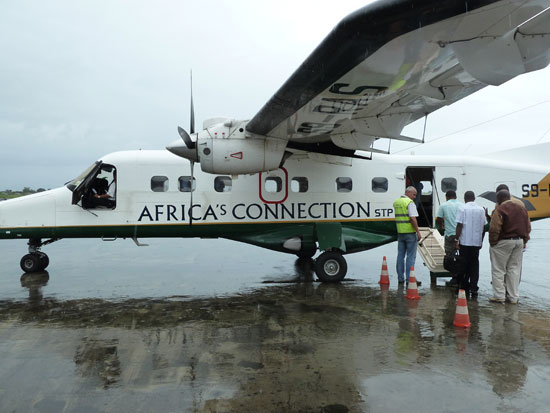 The tiny aircraft sped down the runway and immediately lifted off the ground and glided up and away from the island. Although there was a storm, the sea had few white caps, just appealing textures of dark and light blue sea rolled by as the plane headed towards the small island of Príncipe. 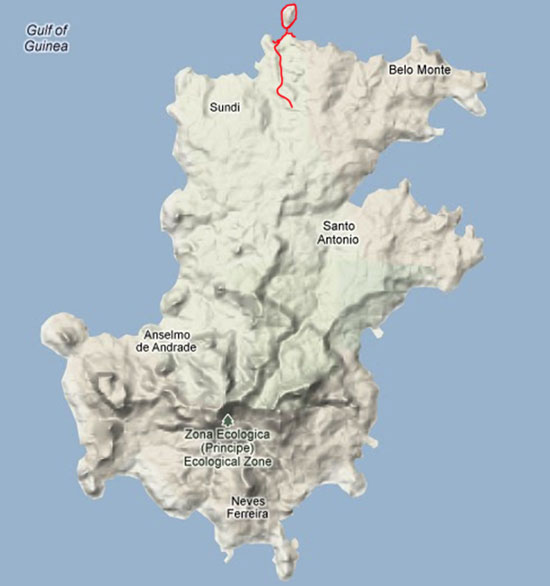 As the tiny island came into view I could see its spectacular mountains and rock spires reaching into the clouds. This must be the kind of island where they film movies like Jurrasic Park or King Kong, just beautiful to look upon. 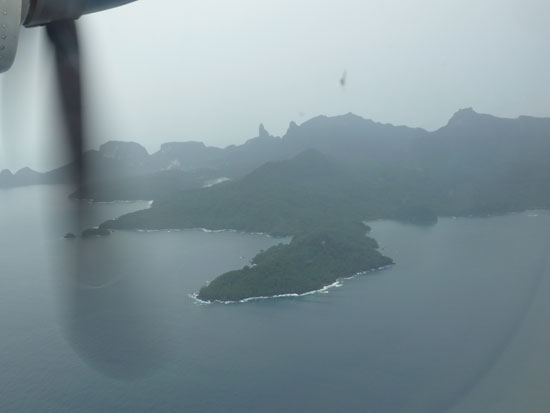 After a smooth landing a dirt road led my driver to a movie star resort called Bom Bom Island Resort. I am not worthy. A manicured tile path snaked between palm trees and beach front cottages with private decks and beaches, a swimming pool, an elevated wooden walkway that spanned a lagoon to a tiny island with an amazing 360° view restaurant. This is what I imagine when I think of Ingrid Bergman and Humphrey Bogart on vacation, not a field station. I could go on extolling the beauty of this resort, but that is for a different blog. I will say, though, if you want to surprise a loved one with a trip to paradise, I cannot imagine a more romantic place. 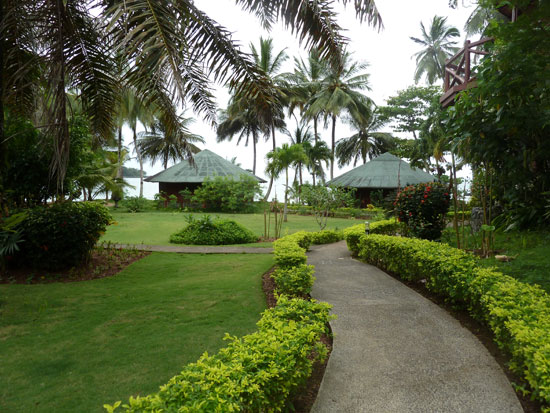 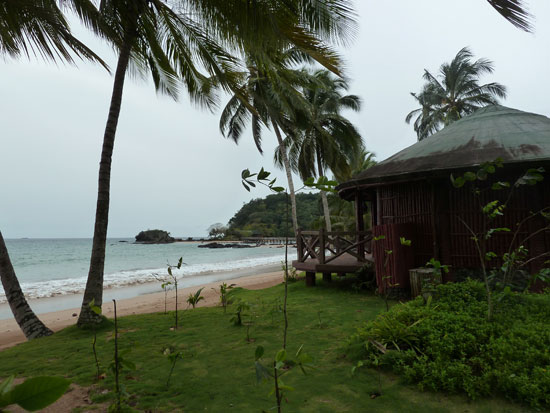 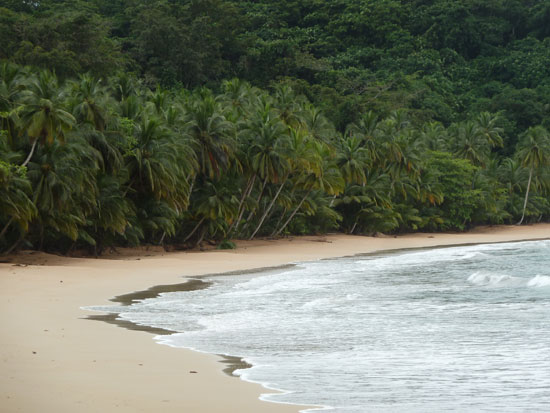 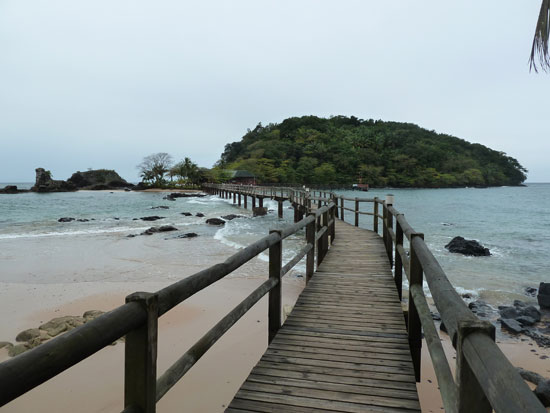