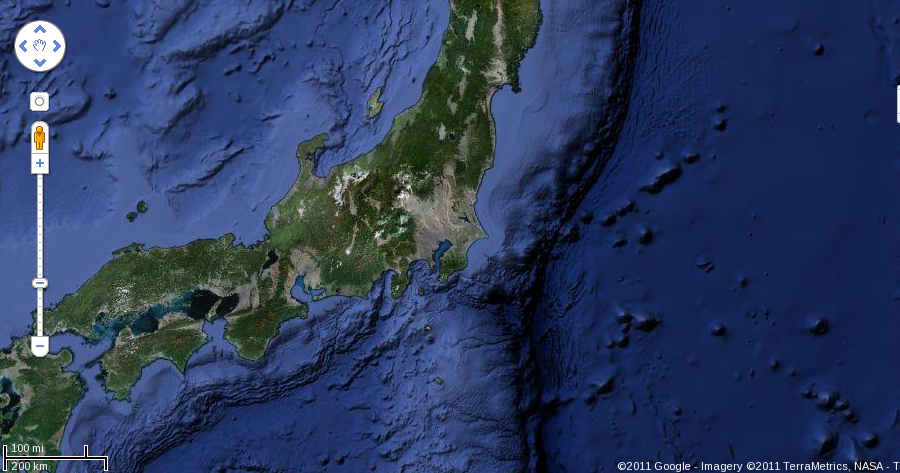 The earthquake that struck the Sendai region off the coast of Japan one week ago is one of the largest that we have ever measured; 9.0 on the moment magnitude scale. I’ve received many questions about this event, and have heard a lot of misinformation both in the media and on the internet. I’m therefore going to use a little space on my climate change blog to talk about this event, and also discuss its relevance to climate change. First, however, I want to pay my respects to all the victims, their families and friends, the rescue workers, and the people of Japan in general. This was a terrible disaster, the consequences of which will continue to be felt for sometime.

Now here are some facts:

1. The Sendai quake resulted from movement along a subduction zone, in a region where the oceanic Pacific plate meets the North American and Eurasian continental plates. Ocean plates of the Earth’s surface are composed primarily of basalt, and being denser than continental plates, will be subducted below the continental plates to be recycled in the Earth’s mantle layer. While it may be easy to visualize plate movements (plate tectonics) as dynamic and fluid, this is true only on very large spatial scales and on very long time scales. On the human time scale, these are immense masses of rock grinding against each other, and it is not at all smooth or fluid. The moment by moment movement is jittery, sticky and frictional. Stress built up in that region, and the plates finally started to slip last week, peaking at the 9.0 quake on March 11. Aftershocks continue to be felt. Note that an aftershock is not necessarily weaker than the initial quake; it simply follows as a result of the same release of stress. The 9.0 was, in fact, itself probably an aftershock of a 7.5 the day before.

2. It is unlikely that an earthquake of that magnitude will strike California, even along the dreaded San Andreas Fault. The San Andreas is a different type of fault, or crack in the Earth’s surface. Here, two plates are sliding past each other, and the fault itself is much shallower than the subduction zone off Japan. If and when the Big One occurs in northern or southern California, it is likely to be in the neighbourhood of 8.0.

3. 9.0, 8.0, both measured on the moment magnitude scale, NOT the Richter scale. The Richter scale is an older measure of Earth movement based on particular instrument measures. While apparently embedded in the media’s vocabulary, it is not a very useful scale at magnitudes beyond around 6.5. Therefore, a new scale, the moment magnitude scale, was formulated many years ago and it is based on the amount of energy released during an Earth movement. That energy is released mostly in the form of rock deformation, heat, and mechanical waves that travel through the Earth’s surface away from the source. We can measure the latter, and through careful calculations arrive at a measure of the total energy. For comparison, and for those of you who may remember it, the 1989 Loma Prieta quake that struck the San Francisco Bay area, magnitude 6.9, was about 1,000 times less energetic than the Sendai quake! The San Andreas Big One, at 8.0, would be about 32 times less powerful than Sendai, but about 45 times more powerful than Loma Prieta. These are powerful events!

4. A quake similar to the Sendai event is more likely to be generated by the Cascadia subduction zone that lies off the coasts of Oregon, Washington and British Columbia.

5. The Sendai quake generated a devastating tsunami that wreaked more havoc than the quake itself. Tsunamis are generated whenever large amounts of water are displaced, usually the result of large movements of the sea floor, as in Sendai, landslides, volcanism, or some combination of these. The Sendai tsunami was particularly deadly because of the proximity of the source to the coast, the rapid shallowing of the sea floor in that area, and the density of the human population. Like ripples in a pond, tsunamis radiate away from their sources at high speed, but are really perceptible only as they enter shallow water. The Sendai tsunami eventually caused damage in areas as far away as Hawaii, northern California, and the Galapagos Islands. This is not the first major tsunami to strike the region; a similar event struck in July, 869 C.E.

6. As I write, the U.S. Congress is considering a bill that would include a $900 million cut to the National Oceanographic and Atmospheric Administration, which administers the United States tsunami warning system. Implementation of the cut is up to NOAA’s top administrators, so write to them now and save your favourite system! Or, if you like surprises, select from among tsunami, hurricane, etc.

7. The tragedy at Sendai continues because of damage to the Fukushima Da’ichi nuclear power plant. Most of the critical damage is exacerbated by or results from failure of coolant pumping systems, and those systems in turn failed primarily because their supplemental fuel storages were swept away by the tsunami. Under current conditions, the amount of radiation that most people, anywhere, will receive from the plant is far less than what you would receive from daily exposure to natural sources in your environment, a trip to the dentist, or a CT scan.

Is any of this relevant to the climate change problem? Yes, for at least two reasons. First, coastal living is not without hazard. Flooding, storms, storm surges, sea level rise and tsunamis are among those hazards. All but the last of these are becoming more problematic as a consequence of global warming. The coasts of Japan are, like many other coastlines around the world; highly productive, economically important, and densely populated. The consequences of global warming are already being played out daily in places such as Bangladesh, Indonesia, and many low-lying oceanic islands.

Second, nuclear energy. I am firmly on the fence with this one. On the one hand, producing energy by nuclear fission generates heaps of highly radioactive wastes and, as current events bear witness, is an inherently risky business. But splitting an atom is very energetic, and produces no greenhouse gases. I am skeptical of solutions based solely on clean, renewable energy sources such as solar and wind energy, and here’s why. Those processes are far less energetic, given current technologies, than is nuclear and the burning of fossil fuels. Given the rate of ongoing global population growth, and our ever-increasing energy consumption, clean technologies simply cannot succeed. They cannot, that is, unless we also greatly increase the efficiency of our energy-consuming activities, and conserve, conserve, conserve. The time has come to make do with less. Until we do, our future will continue to depend on technologically archaic, dirty and dangerous energy production. And, if you wonder why energy-producing technology lags decades to more than a century behind health, communication, transportation and other technologies: money. When we demand better, and we are willing to pay for it, change will follow.