A Smackdown for Bonzo

This month's Illustration Smackdown takes a look at the chimpanzee, Pan troglodytes.  One of the great apes, chimpanzees are, as these things go, closely related to humans. But how close? You can see the current classification chart here, courtesy of the Encyclopedia of Life.

In the 1980s the Jane Goodall Institute “moved to the San Francisco offices of the California Academy of Sciences, where it functioned essentially as a USA/Africa "communication link" and as a repository for files.” (source) and Ms. Goodall continued to have a relationship with the academy after the JGI moved to DC.  She came to the Academy in 2008 to lecture and  promote her pioneering work in primatology. The above images are attributed to Jane Goodall and Hugo VanLanwick 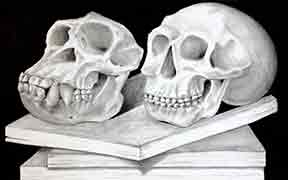 Comparative anatomy is the study of the difference and similarities of different organisms. I will admit to having a fondness for comparing bones. There is something about placing the same bone from different species next to each other that I find both instructive and aesthetically pleasing. To this end, I created the above image with Pan troglodytes on the left and Homo sapiens on the right. The obvious differences in teeth point to differences in diet and acquisition of food. While both are omnivores, the chimpanzees large canines speak to the ripping and tearing of meat, while humans reduced canines likely came about from years of cutting bite sized portions via tool use. Also evident is the difference in size of the brain case. The human cerebrum is much larger than that of the chimpanzee. The extensive development of this cortex in humans is believed to distinguish the human brain from those of other animals