From the Academy Archives: 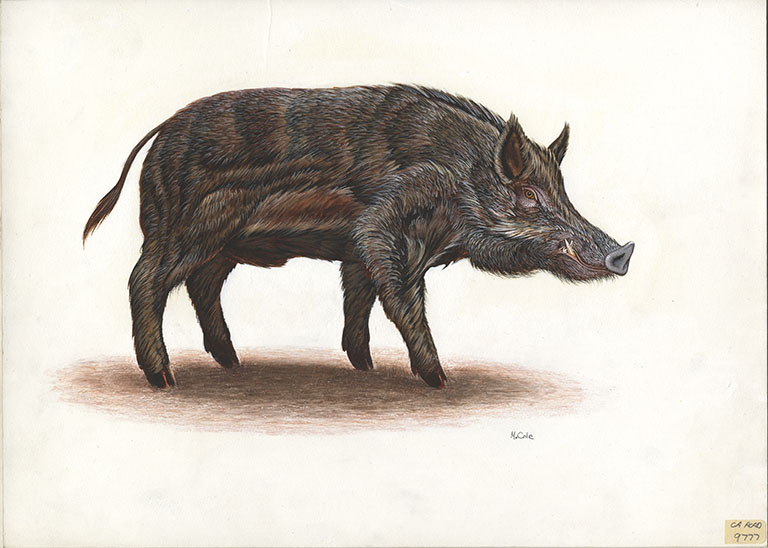 This illustration of a wild boar was stumbled upon while looking for another image in the Academy’s oversized collection in the Archives. Little is known about how the image was used, but it came to us from our own Exhibits Department and was meticulously drawn by Michael E. Cole. 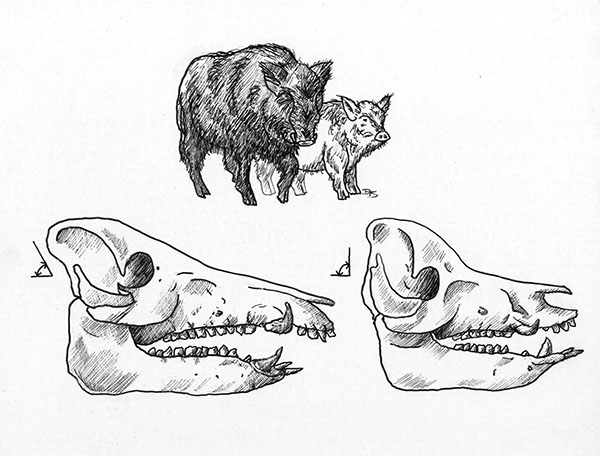 The wild boar and the feral pig are considered the same species despite differences in height, weight and skull shape. I designed this illustration to highlight some of these anatomical anomalies. The skull on the left is a wild boar; the one on the right that of a feral pig.

More about Sus scrofa: Wild Boar, Feral Pig
The wild boar is native to Europe, but has been widely introduced as a game animal throughout the world. In North America, it has successfully interbred with escaped feral farm pigs. This has happened so much that most writings simply refer to Sus scrofa under the blanket term Wild Pigs. In California, these wild pigs run amok through open space land and regional parks. Omnivorous opportunists, they wander the landscape vacuuming up vegetation, and just about any other living thing in their path.

The females become sexually mature at 18 months of age, producing 6-10 young per litter, often having more than one litter per year. A large group of females and their recent young are called Sounders.  Adults can reach sizes over 750lbs. Males are usually solitary and can sharpen their tusks by rubbing the lowers against the uppers.

Here's a great article about the infestation of wild pigs in the East Bay Regional Park District :
http://baynature.org/articles/oct-dec-2010/ground-invasion/?searchterm=feral%20pigs