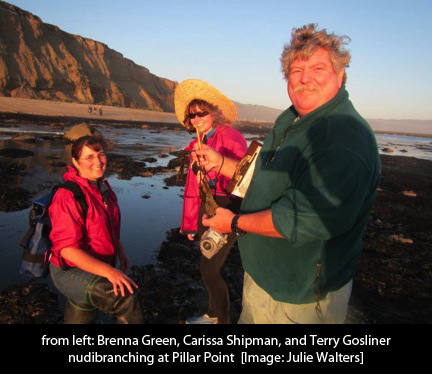 At least four times a year, Friends of Fitzgerald Marine Reserve and other marine biology enthusiasts like myself, assist with surveying nudibranch populations. These surveys involve getting down and dirty in the local tide-pools in search of sea slugs. I have participated in several of these surveys since starting my graduate program in marine biology at San Francisco State University. These surveys are always exciting since they provide an opportunity for me to see species of sea slugs I have never seen before. I chose to study marine biology due to my great passion for nudibranchs, which have been given such ostentatious descriptions as the gems or butterflies of the ocean. Their sizes, colors, and patterns never cease to amaze me!

Fitzgerald Marine Reserve is a marine protected area in Half Moon Bay located about 40 minutes south of San Francisco off of Highway 1. It is a great place to learn about and marvel at the local marine biodiversity. Here many dedicated volunteers help protect and teach visitors about the uniqueness and beauty of California’s marine life.

The nudibranch surveys are important since they allow us to tally and document the species seen at different times of the year, at various field localities and tides. Very low minus tides are optimal for nudibranching since more rocks and pools are exposed for exploration. These surveys are also important since the number and diversity of nudibranchs is an indicator for marine ecosystem health. Nudibranchs are excellent indicator species since they depend on a wide variety of marine organisms for food. 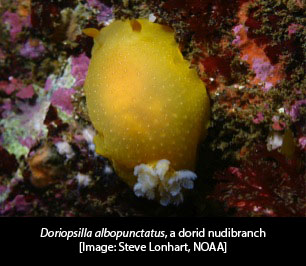 My last adventure searching for sea slugs was on Sept. 30 at Pillar Point. Although the diversity of sea slugs documented was low, I saw seven species I had never seen before. One of these sea slugs was the Salted-Yellow Doris, Doriopsilla albopunctata. This species is an example of a dorid nudibranch. Dorid sea slugs possess a plume of gills, which project out of their backs like tiny feather dusters. Another new species for me was the White-Frond Aeolis, Dendronotus albus , which is an example of a dendronotid nudibranch. Dendronotid sea slugs possess small projections called cerata, which run parallel along their backs. These appendages contain gills, which allow them to breath under water. 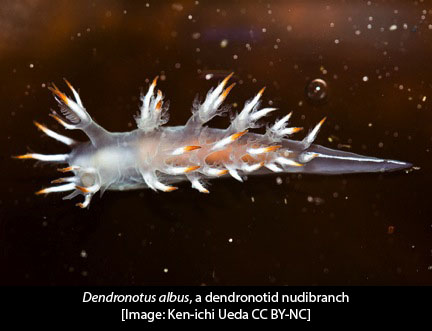 One other great aspect of this survey was that my advisor Terry Gosliner participated. He has been studying sea slugs for over 40 years and has noticed a stark change in the amount and diversity of sea slugs along California’s coast. Unfortunately, rather than seeing an increase in diversity, there has been a decline.

Marine life is vital to the existence of humanity and essential to our planet. I am hoping that in my lifetime and in my professional life as a scientist, the ocean will be made a bigger priority by governments and individuals. We owe it to ourselves to be better stewards of the oceans since so much marine life has yet to be discovered. Every moment spent immersed in the splendors of the ocean testifies to the need to protect and preserve it.

The data collected by each survey will eventually be compiled together to see if there are correlations between nudibranch populations, time of year, field localities, and weather patterns. Surveys like this are super valuable since they give us a greater picture of what is happening ecologically with local sea slugs and marine environments. Surveys like these also allow citizen scientists, educators, students, and expert scientists to work together for the greater good of our ocean.