Specimen of the Day: Brown Creeper

Sometimes I find myself staring up into a tree and losing myself in thought. At times it is productive thought but sometimes I’m just gazing, thinking of nothing in particular. There’s the rare occasion, though, that I’m rewarded by a glimpse of a Brown Creeper making its way up the tree trunk searching for small and tasty insects. Though not an often occurrence, it’s always exciting to watch these small birds as they forage from tree to tree and I get the feeling that many may often overlook these residents of San Francisco. 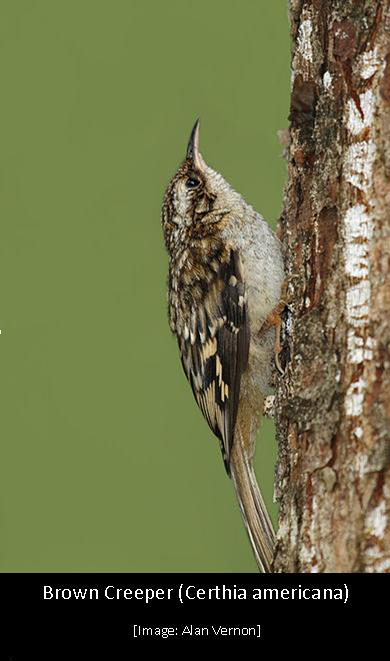 The Brown Creeper (Certhia americana) is the only species of treecreeper that occurs in North America - other treecreepers can be found in Europe and parts of Asia. Here in North America, Brown Creepers can be found, as their name indicates, creeping up the trunk of a tree. Starting at the bottom, they have a unique spiraling trek up and around the trunk looking for insects and then when they reach the top they fly to the base of their next trunk. Much like woodpeckers, Brown Creepers have a stiff tail that they use as leverage as they inch their way up. Their brown mottled coloring makes them difficult to see against the bark so you may have to take a second look to find these birds!

I’ve seen these birds at Sutro Heights, Stow Lake and also in Cole Valley, so they aren’t impossible to spot while out and about. One other place to check out these birds is in the research collection at the Academy of Sciences. Since the study skin that I prepared this weekend was found in San Francisco, comparing it to other Brown Creepers found in the City can identify regional differences of the Bay Area population. Within each population of Brown Creepers there can be slight color variations from brown to brownish-red to grey. Using the research collection, scientists can also study these morphological trends over larger geographical regions like North America, even over the last few decades! In the next photo, you can see that some of the specimens in the research collection were found in the late 1800s to early 1900s. Looking at these specimens from over a hundred years ago gives researchers a baseline of historical data to use in their research about how these birds have potentially changed over time. Who wouldn’t want to study these amazing birds?! 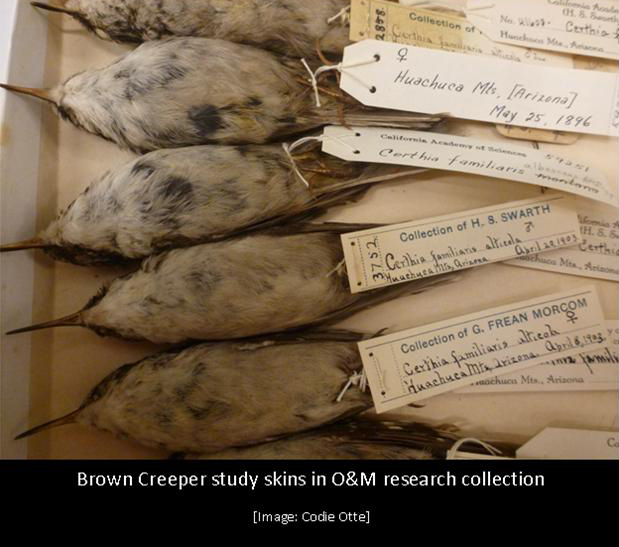