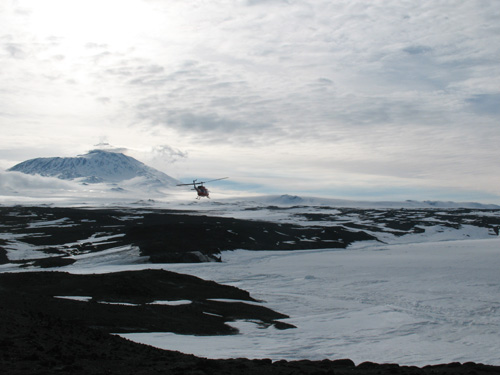 Today I visited Cape Royds, about 20 miles (32 km) north of McMurdo Station. The helicopter ride offered spectacular views of the rugged Ross Island coastline, McMurdo Sound, and Mount Erebus, the world's southernmost active volcano. Royds is the site of the 'Nimrod' hut, Ernest Shackleton's 1907-09 British Antarctic Expedition headquarters where Aurora Australis was written, designed, printed, and bound in the course of a harsh winter a hundred years ago. It was an important destination for me -- a pilgrimage even -- given the book's centrality to my project. 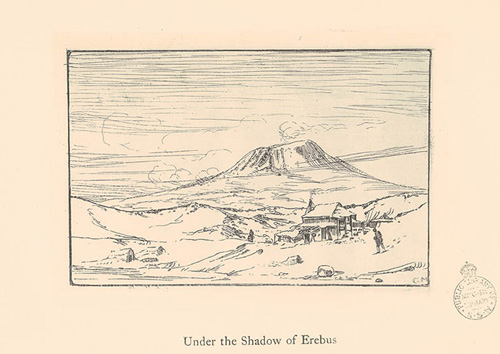 Here is the hut in 1908, as drawn by George Marston for Aurora Australis... 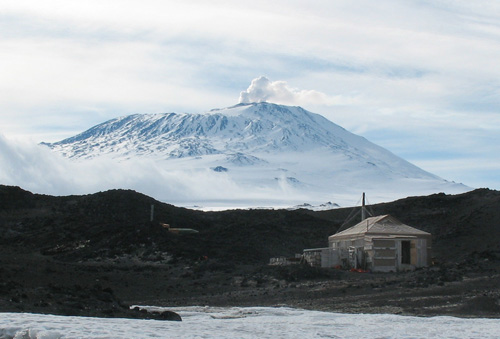 ...and here it is today, remarkably intact thanks to consistently sub-freezing temperatures and its designation as an Antarctic Specially Protected Area under the Antarctic Treaty System. The hut is one of four historic sites under the care of the Antarctic Heritage Trust which ensures their preservation and legacy for future study. 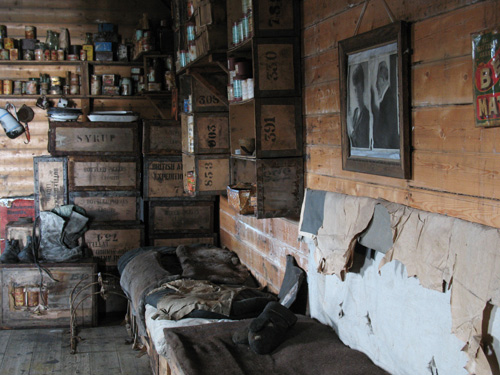 It didn't take long to find the wooden Venesta cases I'd come to see. Shackleton and his men offloaded no less than 2,000 of them from their ship Nimrod, dozens of which still remain stacked in and around the hut. There were plenty of boxes for the Nimrod crew to recycle, not only as Aurora Australis book covers but also as book shelves, supply cases, shoe boxes, platforms, supports and furniture. 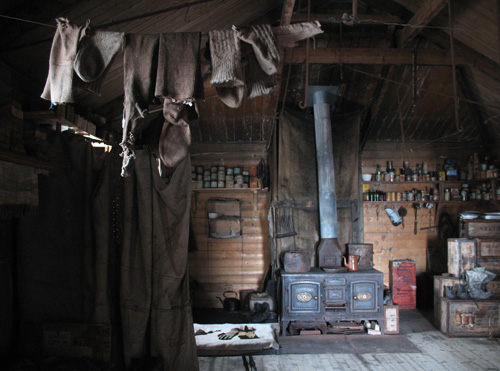 Stacked provision cases also served to create separate living and working areas. The since-dismantled 6x7-foot letterpress cubicle was among these, situated where the cot juts out from behind the curtain on the left. This tight space was known as ‘The Rogues’ Retreat,’ also accommodating a large sewing machine and bunks for the printers Frank Wild and Ernest Joyce. 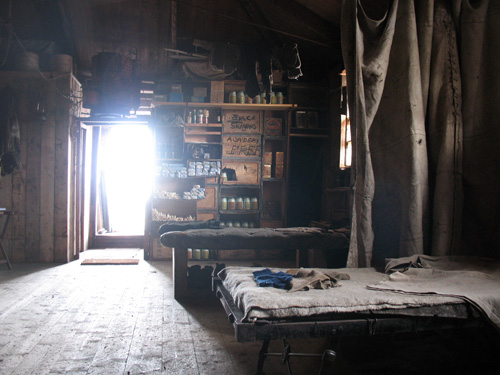 Looking back towards the entrance, the foreground cot marks the same spot. The printing equipment was long since returned to England but unused reams of the book's 'Abbey Mills Greenfield' watermarked paper remain on a dark shelf along the north wall. 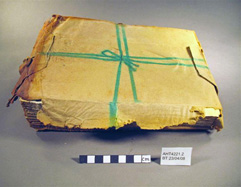 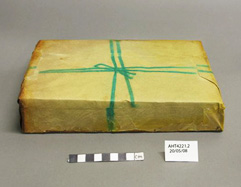 The paper is among 5,000+ hut artifacts conserved as part of the Ross Sea Preservation Project led by the Antarctic Heritage Trust. This shows the bottom of a paper ream before and after treatment for acid, mold, and moisture damage. 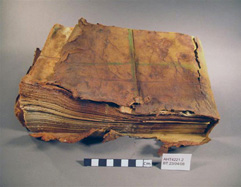 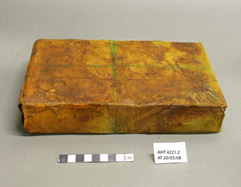 Even in extreme instances such as this one, treatment helps slow down the deterioration process. Much thanks to Antarctic Heritage Trust Secretary Fiona Wills for permission to reproduce these photos. More of the Trust's preservation efforts are described in fascinating detail on the London Natural History Museum's Antarctic conservation blog. 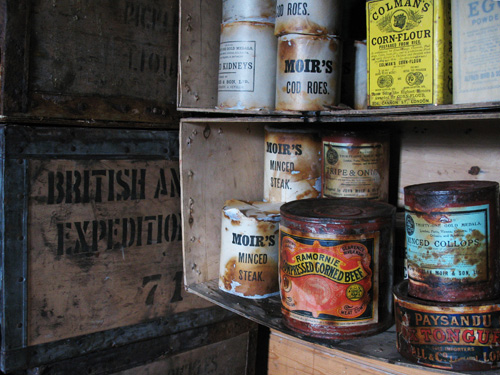 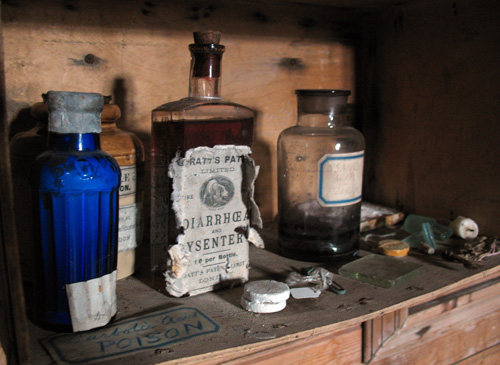 A medicine cabinet sits alongside the south wall; carbolic acid marked 'poison' differentiates it from the neighboring cases of food. 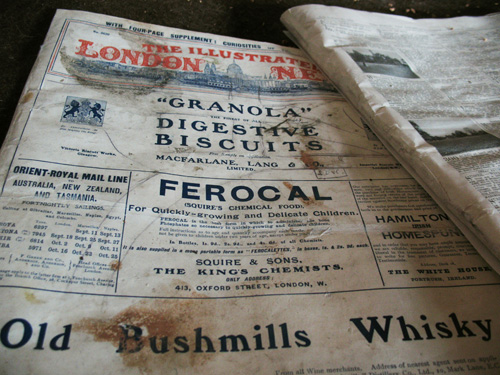 The hut is exquisite for its authenticity. Original socks still hang from clothes lines; tattered gloves lie on cots, newspapers languish where they were left. 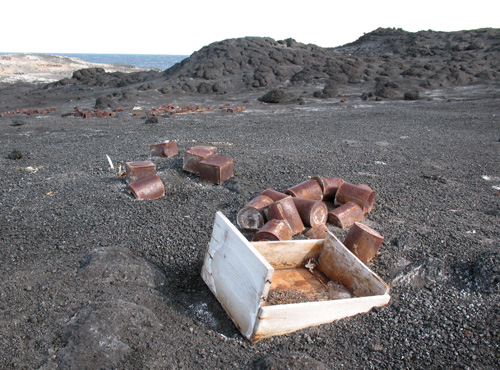 Relics also dot the hill behind the hut, down towards the icy shore. They're rusted through, perhaps too decayed to be saved. 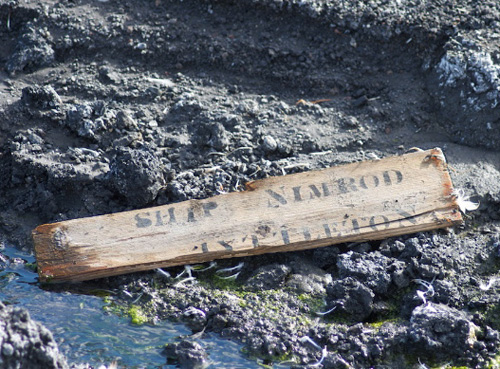 Nearby, a plank photographed by my friend Holly Troy reads "Ship Nimrod Lyttleton." Lyttleton is the New Zealand port from where the expedition was launched. Painful as it is to see these artifacts eaten by the elements, Antarctic Specially Protected Area status prevents others than conservators from disturbing them. At expedition's end, Shackleton wrote about his departure from Cape Royds: "We all turned out to give three cheers and to take a last look at the place where we had spent so many happy days. The hut was not exactly a palatial residence...but, on the other hand it had been our home for a year that would always live in our memories...We watched the little hut fade away in the distance with feelings almost of sadness, and there were few men aboard who did not cherish a hope that some day they would once more live strenuous days under the shadow of mighty Erebus". Shackleton never returned to Cape Royds in his lifetime. Afterwards is anyone's guess. One thing for sure: if ever a place effectively evoked its former inhabitants' ghosts, this is it.