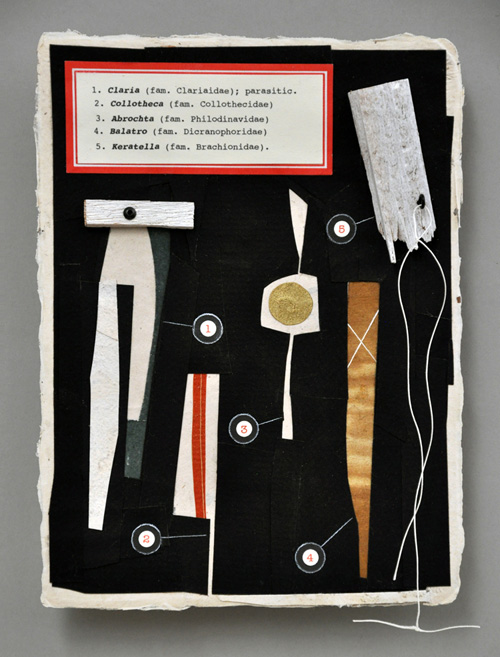 The subject of this assemblage is bdelloid rotifers, tiny transparent animals found in moist environments worldwide, including Antarctica. These fascinating invertebrates were described in a chapter of Aurora Australis, the book printed by Shackleton's Nimrod crew in the cold, dark Antarctic winter of 1908. The chapter's author, the expedition's biologist James Murray, titles his essay "Life Under Difficulties" which refers not to the hardships endured by the men as he points out, but "…rather to some of our very humble fellow-creatures, animals quite micro- scopic in size, which are able to live under conditions which seem to us extremely unfavourable." Murray goes on to describe the bdelloids' resistance to damage (because of their size), endurance of drought (by entering a state of dormancy), and their tolerance to extreme heat and cold "…which promises to shed much light on the limits of temperature at which life is possible on the earth." Indeed it did. But there was more to come. A hundred years on, scientists learned that these creatures are the planet's most radiation-resistant animals—more so even than the hardy tardigrades (a.k.a. 'water bears.') They also know now that bdelloid rotifers reproduce asexually, challenging the assumption that sex is necessary for the diversification of species (over 450 species in this case). Most intriguing is that these animals have evolved and thrived over millions of years through the special ability to pick foreign DNA up from the environment and incorporate it into their genomes. The new material comes from sources such as as bacteria, fungi, plants, even semi-digested food, and gets into the cells that will become eggs. Murray wrote about bdelloid eggs but he never knew they were products of 'horizontal gene transfer.' He surely would have marveled that this process — common to bacteria — should also apply to his beloved Bdelloidea. Their ability to evolve this way is believed to be unique in the animal kingdom. Somewhat along the lines of finding foreign genes to build with, I used scavenged material to create the specimens here. Wood, hardware, thread, paper, and graphite combine to depict Claria, a parasitic (fam. Clariaidae); Collotheca (fam. Collothecidae); Abrochta (fam. Philodinavidae); Balatro (fam. Dicranophoridae); and Keratella (fam. Brachionidae); a set of bdelloids chosen for its array of physical features.