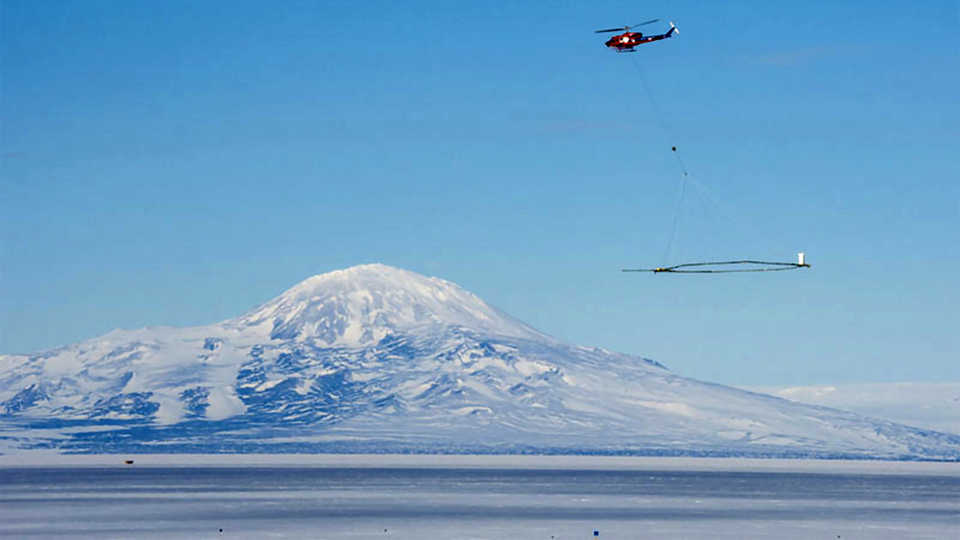 Although Antarctica appears as a frozen wasteland, there turns out to be hidden water systems underneath its McMurdo Dry Valleys. Over the past eight years, scientists have gathered evidence for the existence of a salty subterranean aquifer using highly sensitive airborne instrumentation called SkyTEM. The resulting data provides a glimpse into glacial dynamics, past climactic events in Antarctica, and an ecosystem that supports microbial life, offering clues about the potential for life on other planets.

SkyTEM is a helicopter-mounted electromagnetic mapping sensor system in the form of a 20-meter ring. Akin to a giant flying metal detector, it allows researchers to map hundreds of square miles of liquid water surging through the rugged subsurface of the world's coldest and driest desert. The sensor works by extending a subtle electrical current into the ground and measuring the response from the landscape below. The strength of the return signal provides a picture of resistivity, indicating whether the underground material is rock, ice, liquid water, or some combination of all three.

The device, developed at Aarhus University in Denmark, detects approximately half a mile of depth beneath the surface. Initially flown over the Dry Valleys in 2011, it was the first to glimpse the extent of the interconnectivity between the bodies of water throughout the region. Those findings were published in 2015 in Nature Communications by project leader Jill Mikucki, a microbiologist at the University of Tennessee, Knoxville. Her paper's co-authors included researchers from the University of California, Santa Cruz; Dartmouth College; the University of Illinois at Chicago; Louisiana State University; University of Wisconsin; Aarhus University in Denmark; and Sorbonne Universités, UPMC in France. Micucki is now building on those findings with SkyTEM's second version to create a comprehensive map of the subterranean hydrology.

In the process, Mikucki has flown the device over Taylor Glacier, one of the most scrutinized ice masses on Earth. Taylor has a unique feature called Blood Falls which gets its name from the bright red, iron-rich brine that sporadically flows from it. An active microbial community is known to thrive inside its isolated and extremely cold environment by feeding on iron and sulfur compounds for energy and growth. Mikucki hopes to trace the origin of the water that flows at Blood Falls to reveal why the falls flow, how its interior functions, to what extent its microbes extend throughout the valleys' larger groundwater system, and how the microbes facilitate rock weathering.

“The below-ground processes, if they eventually leak to the surface like Blood Falls does, can help drive the ecology of the surface,” Mikucki said. “If we can find a way to get into some of these environments [someday], we can start asking questions ‘Are they the same as Blood Falls?’ because if they have microorganisms in them that are active that are interacting with the bedrock and liberating nutrients, that could impact the surface world.”