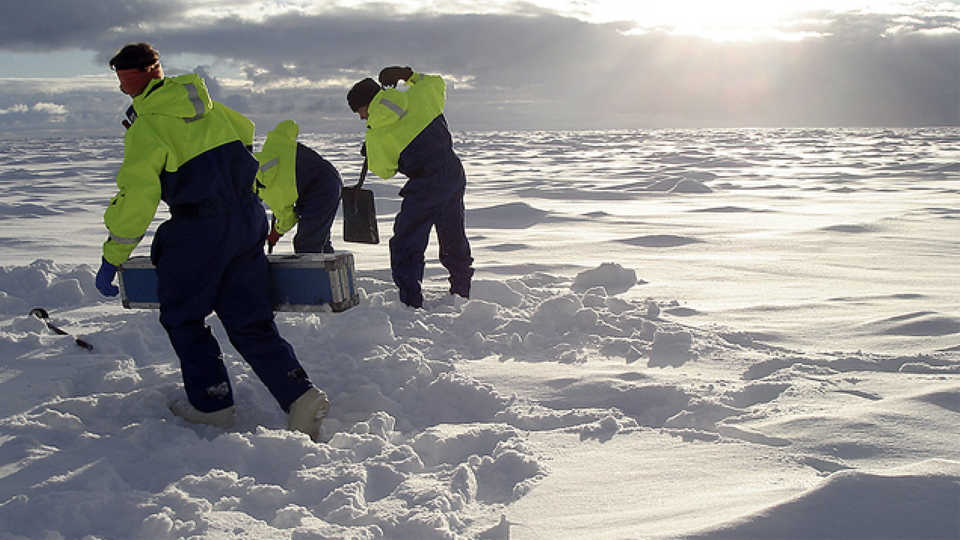 Digging for snow and ice samples in the Amundsen Sea. Researchers are interested in tracking persistent organic pollutants through the polar food web, believing the source to be glacial meltwater. Photo: Ingegerd Hageman, NSF.

As global pollution goes, Antarctica remains one of the most pristine regions of Earth. Yet despite its remoteness and relative purity, it is becoming increasingly vulnerable to the spread of pollutants worldwide.

The ozone hole over Antarctica is one of the best well-known examples of pollutants originating in one place and affecting another. The hole is a product of chlorofluorocarbons (CFCs) having been pumped into the atmosphere by the industrialized world over time. CFCs are stable enough to persist for decades, allowing them to reach the stratosphere where the sun's ultraviolet light frees their chlorine atoms. Liberated chlorine then catalyzes chemical reactions that rapidly destroy ozone, allowing dangerous ultraviolet radiation to reach the Earth's surface. This happens over Antarctica because the continent's extremely frigid wintertime atmosphere facilitates the formation of high-altitude cloud particles which promote ozone-depleting processes that don't take place under milder conditions.

Antarctica also feels the world's spread of plastic waste and toxic chemicals. According to a 2018 Greenpeace report, microplastics were detected in 9 of 17 water samples collected off the Antarctic Peninsula. On land, seven of nine snow samples contained chemicals known as PFAs (polyfluorinated alkylated substances) which are used in industrial products and can be harmful to wildlife.

The year before, scientists at the University of Hull and the British Antarctic Survey found levels of microplastics in Antarctica that were five times higher than expected at local sources such as research stations and ships, providing evidence for waste having crossed the Southern Ocean whose circulation patterns were once believed to be barriers to man-made pollutants.

Persistent organic pollutants (POPs) are of great concern. POPs are toxic environmental contaminants that are resistant to environmental degradation. Released by global agriculture and industry over the past century, these substances drift to Antarctica and pose significant harm to wildlife, plant life, and humans in the region. POPs are consumed by several species whereupon the effects are exacerbated by bioaccumulation (also called biomagnification) which exposes species higher in the food chain to more pollutants.

A notable example is the pesticide DDT which U.S. Antarctic Program scientists found in the tissue of Adélie penguins more than 30 years after much of the world had banned or restricted the chemical compound's use. It is believed that the substance was transported to the ice decades ago by the atmosphere, settled on glaciers that stored and transported it to the coast, and subsequently released it in glacial meltwater where it worked its way up the food chain.

The phenomenon responsible for transporting pollutants over great distances is known as the global distillation effect, or “grasshopper effect.” It tends to move from warmer to colder regions as chemicals and other pollutants evaporate at warmer climates, travel through air and water to regions distant from their original sources, and condense back out at colder temperatures. This process leads to accumulating concentrations of POPs in polar climates.

Global action on POPs was initiated In 1995 by the Governing Council of the United Nations Environment Programme (UNEP) which led to regulation or banning of the substances deemed most damaging. Today POPs are regulated under the UN Stockholm Convention which aims to eliminate or restrict their production and use throughout the world.

Specifically addressing Antarctica is SCAR's Input Pathways of Persistent Organic Pollutants to AntarCTica (ImPACT) group facilitating research and monitoring of chemical contaminants on the ice and in the Southern Ocean. It serves the Global Monitoring Plan of the Stockholm Convention on POPs as well as the Protocol on Environmental Protection to the Antarctic Treaty (The Madrid Protocol) that prohibits the importation of toxic chemicals to Antarctica.