Robert Scott's Discovery team suffered during their two years at Hut Point. There was snow blindness, frostbite, and Shackleton himself was sent home with a debilitating case of scurvy midway through the expedition. But in spite of the suffering, or perhaps because of it, the men devised ways to entertain themselves throughout the ordeal, especially throughout the dark winter months. Among these diversions was a play called "Ticket of Leave" staged in the frigid Discovery Hut. A brief account of the production can be found here along with an amusing photo of the troupe in costume, including the two "ladies" of the play. The hut was subsequently dubbed the 'Royal Terror Theatre.' A production of an entirely different kind was that of The South Polar Times, a newsletter edited by Shackleton during May–August 1902, preceding his affliction. This one really piqued my interest as a creation at the crossroads of art and science. 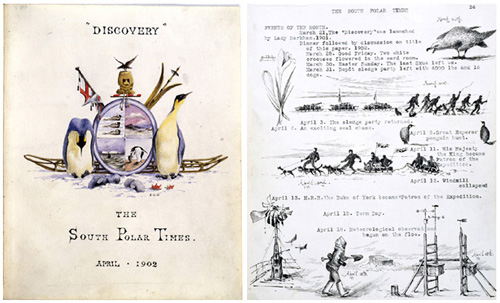 There was no printing press; the 'publication' consisted of a single typewritten copy passed hand-to-hand. The pages contained news, poetry, puzzles, scientific essays on geological, climatic, and biological topics, and not-so-scientific musings on the taste of penguin meat. Items were profusely illustrated with drawings, paintings, satirical cartoons, charts, maps, and detailed zoological diagrams pasted into place to create pleasing layouts. The page on the right, above, is titled "Events of the Month," recounting the outset of the Discovery expedition. Among the entries: "April 6. An exciting seal chase;" "April 11. His Majesty the King became Patron of the Expedition;" "April 13. Windmill collapsed;" "April 18. Meteorological observations begun on the floe." 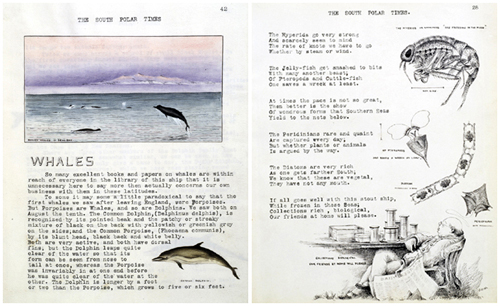 The entire crew was invited to contribute words and pictures, and talent was evident among them. Most prominent is the art of Dr. Edward Adrian Wilson, the expedition's junior surgeon, zoologist and official artist. His whale illustrations above are among 200 colored sketches of the Antarctic landscape and animal life he completed during the expedition, and he would return with Scott on the Terra Nova Expedition to render many more. Look for more on Wilson in the Crary Library post I have planned for the next day or two. 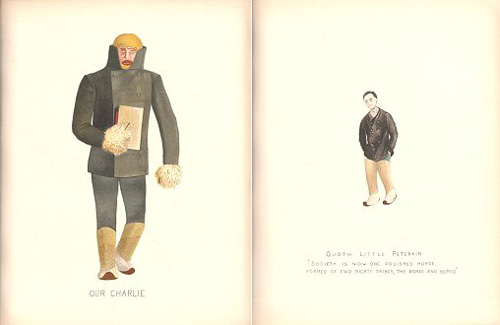 Left, Charles Royds, Royal Navy officer and First Lieutenant of the RRS Discovery who Cape Royds was named after. As of this writing, it's unclear who drew these fabulous caricatures and most of the rest of the art -- with the exception of Wilson's recognizable style. I'll be investigating art credits for the SPT in the weeks to come and will report my findings here.

‘Cutlets’ was the nickname of Reginald Koettlitz, the expedition's chief surgeon and doctor. 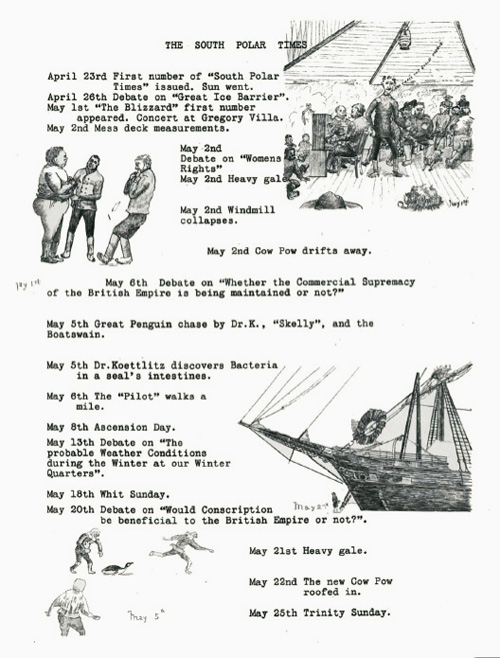 Shackleton's editorship of The South Polar Times was a natural; he had a fondness for literature and poetry, and enjoyed composing verse under his nom de plume, "NEMO." The SPT's success quite likely gave him the impetus to plan the printing of Aurora Australis for his Nimrod party's winter-over at Cape Royds in 1908. Although not originally intended for publication, a collected South Polar Times was eventually compiled on the Discovery's return home. The 3-volume anthology was printed in limited editions by Smith, Elder and Co. of London, 1907-1914. The first two volumes were issued in 250 numbered copies each, and the third in 350 numbered copies. In the preface to volume 1, Robert Falcon Scott writes: "The owner of these volumes will possess an exact reproduction of the original ‘South Polar Times’ which appeared month by month during the winters of 1902-3, produced as they were for the sole edification of our small company of explorers in the ‘Discovery’, then held fast in the Antarctic Ice. No attempt has been made to re-edit the text or to supply explanatory notes, and therefore it would be unfair to those who were responsible for it to omit mention of the circumstances under which the original volumes came into being. In March 1902 we were busily preparing for our first Antarctic winter as we watched the sun sinking towards its long rest. We knew that daylight would shortly disappear for four whole months, and our thoughts turned naturally to the long dark period before us and the means by which we could lighten its monotony. And so it was in this month that we met in council around the ward-room table to discuss the first Antarctic Journal; then and there we christened it, suggested its general lines, and appointed Mr. Shackleton as editor to guide its destiny. Our Journal, we decided, should give instruction as well as amusement; we looked to our scientific experts to write luminously on their special subjects, and to record the scientific events of general interest, while for lighter matter we agreed that the cloak of anonymity should encourage the indulgence of any shy vein of sentiment or humour that might exist among us. Above all, the ‘South Polar Times’, as we had determined to call it, was to be open to all; the men as well as the officers were to be invited to contribute to its pages."