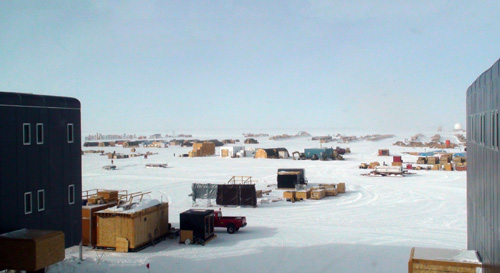 Out towards the summer housing barracks, a profusion of tri-walls and stacked stuff dot the landscape. The South Pole Waste Department lies in that direction, and Paul and I set out for it.

I met Waste Management Specialist Clair Von Handorf who kindly showed me around the area and explained her department's operations. Her team's chief task is to process the station's trash and ship it out as soon as possible. To facilitate this, she and her two techs (Wasties, as they're affectionately called) have a number of jobs. One is briefing the station's residents on how to correctly sort trash. Another is setting up, maintaining, and emptying various departments' trash lines and recycling boxes. They also clean up hazardous waste spills, rearrange and consolidate berms (storage in snow banks), and coordinate with the Cargo Department to ship off both solid and haz waste.

They even set up solar toilets. And of course, regularly empty the toilets' 55-gallon drums.

The many demands on the 3-person team are slightly eased by a community clean-up system unique to the Pole: each one of approximately 250 summer residents (and about 60 in winter) takes turns as a 'House Mouse,' performing routine duties for set periods. These include cleaning both work and living facilities, taking trash out from buildings to the tri-walls, and doing any additional sorting. Tri-walls get banded up in the Waste Yard and put on palettes in the Cargo waste area. An important concern of Clair's is compliance with the Antarctic Conservation Act, an international agreement requiring removal of all hazardous waste from the station within 15 months of being generated.

At the airstrip, waste is in Cargo's hands. It all gets sent to McMurdo either by LC-130 Hercs or the South Pole Traverse, an overland convoy of loaders and sleds. This year over 100,000 pounds of solid waste left on the Traverse. Despite the job's challenges, Clair finds rewards in her work. She explains: "Most of the garbage is frozen, does not smell (usually) or rot, and there are no bugs or rodents to worry about. A big part of my job is to make sorting the trash as easy as possible for everyone else so that each department does it right the whole season. Almost 70% of the garbage is shipped back to California in February to be recycled or reused, and that's something I am proud of. Considering how remote and limited our resources are, I am proud that the effort to lessen our impact on Antarctica, the last pristine continent we’ve got left, is being upheld."

There's another reward to working here: beholding Spoolhenge, a striking assemblage of gigantic wooden spools stacked in an inadvertently artistic manner, stretching on for a half mile or so. The collection is theoretically waiting removal, but I suspect its growing fame (and size) might render it an historic artifact instead. Or so I hope. Thanks Clair for this visual treat and all the info, and to Paul for taking the time to show me around more places on station than I could fit in the blog.

One last thing: The station has two poles. One is the Geographical Pole which marks the GPS location of 90 Degrees South -- or at least attempts to keep up with it as the glacier we're on drifts towards the Wedell Sea at a rate of 10 meters a year. Hence the movable staff.

Then there's the Ceremonial Pole, which never moves. The red-and-white prop is strictly for photo-ops. Yet it's at this pole, strangely enough, that I had the profound sensation of standing at the very Bottom of the World. Perhaps you can tell.