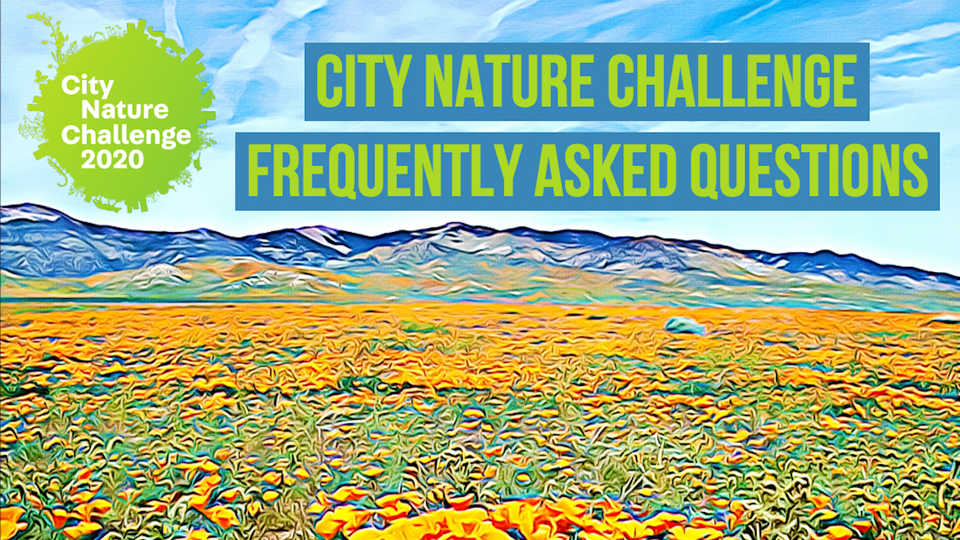 How has the City Nature Challenge changed in light of COVID-19?

Please refer to our COVID-19 FAQ page for details, but the main change is that this year's CNC is no longer a competition - we will be announcing the collective results from around the world instead of "winners."

When can I start making observations that will county for the City Nature Challenge? When should I stop?

Can I upload photos during the CNC that I took prior to the CNC?

No, only observations made during April 24-27 will count for the City Nature Challenge.

Do I need to join the project and add my observations to it for them to be included?

How can I make sure my observations are in my city's CNC project?

What kinds of observations should I make during the CNC?

Any observations of WILD plants, animals, fungi, seaweed, bacteria, lichen, etc. you find in and around your city! Observations of living or dead organisms, or evidence of those organisms, like shells, tracks, scat, feathers, etc., are fine. Remember to make sure you’re taking good photos of the organisms!

What if I make an observation of something I know isn't wild? Will it still count for the CNC?

Yes, as long as you’re not making a lot of these observations, most cities will include observations of non-wild organisms during the CNC. However, it’s VERY IMPORTANT TO MARK THOSE OBSERVATIONS AS CAPTIVE/CULTIVATED. Please be a good community member and data steward by marking any observation that you know for sure is not wild as captive/cultivated - in iNaturalist, there’s a field for it in the app when you make an observation. This includes pets, animals in a zoo/aquarium, plants in your garden, potted plants, plants at a botanical garden, etc. Here’s a very short video on how to mark observations as captive/cultivated.

What if I don't know what the organism is that I took a picture of? How do my observations get identified?

No problem! You don’t have to know what species it is you took a photo of - you just need to take a good enough photo (or photos) that it can be identified (see tips for taking good photos). There are a couple ways you can get your observations IDed:

Do I have to make observations using the app? What if I want to use a real camera?

For iNaturalist, while it’s convenient to use the app to make observations, it’s fine if you want to use a real camera. You can upload your observations using the Upload tool on iNaturalist, and if your camera doesn’t have a GPS, you can drop a pin to indicate where you made each observation. If you’re planning on making most of your CNC observations using a camera, we recommend watching this short video on how to best use iNaturalist’s Photo Uploader.

What about if I see something but didn't get a photo of it - can I still make an observation?

We get it - sometimes a cool bird or butterfly flies by without stopping and you just can’t get a picture. Yes, you can make observations in iNaturalist and most other platforms without a photo, and most cities will allow observations without photos for the CNC. However, please do this sparingly, and only if you know for sure what the species was, since no one can help ID or confirm an observation without a photo.

Where can I see how my city is doing?

Potentially in two places, depending on what platform your city is using to gather observations. The City Nature Challenge website has a list with all the cities, but the numbers are not real-time for some cities. Cities using iNaturalist can see how they’re doing in real-time in the City Nature Challenge umbrella project. Remember that this year the results will the the collaborative effort of everyone around the world - the CNC is no longer a competition.

An identification confirms that you can confidently identify it yourself compared to any possible lookalikes. Please do not simply “Agree” with an ID that someone else has made without confirming that you understand how to identify that taxon. If you agree with the ID without actually knowing the taxon, it may reach Research Grade erroneously.

To get an observation to “Research Grade” status: (1) it must have a photo, (2) it must have an accurate date and location, (3) it cannot be a captive or cultivated organism, and (4) over 2/3rds of the people adding IDs to it have to agree about what species it is. It’s key to check back on your observations after you make them to see if anyone has added an identification or left a comment, possibly asking you to provide a bit more information about what you saw. Click here to learn more about Research Grade.

All observations will count for the CNC, even those that are not Research Grade.

I took so many photos during the CNC that there's no way I can get them all uploaded before the end of the day on April 27 - what should I do?

Relax! Luckily we have a week - up until May 4 at 9am YOUR LOCAL TIME , where you can work on uploading all the observations you made during April 24-27. They’ll still get added to your city’s CNC project, as long as they were made in the April 24-27 window.

Can I help identify what people found during the CNC? What if I'm not an expert in anything?

Yes! In the same way that anyone can be an observer, anyone can help identify observations. In iNaturalist, go to your city’s project, click “Observations” and you’ll see an “Identify” button pop up just below it. Clicking this will take you to the iNaturalist Identify page and show you all of your city’s observations that still need to be identified. From this page, you can restrict what it shows you by taxon, which helps if you know how to ID certain groups. If you’re not an expert in any group, you can still help by identifying the “unknowns” - the observations with no IDs at all! Click the “Filters” button and then select the dashed-line leaf with a question mark in it:

This will show you all the observations that are currently listed as “unknown.” It’s really helpful to go through these and add high-level IDs like “plants” or “insects” or “birds” or “fungi” - whatever you know about the organism - so people who do know how to ID these groups down to species can find them! Here’s a short video about using the Identify page.

No matter what, please only add an ID of which you can be reasonably sure - it’s fine if you don’t know what something is, and it’s fine to only add a genus or family or even kingdom level ID.

If you want to help identify observations from any city - great and thank you! Click this link to go to the Identify page for the entire City Nature Challenge.

On iNaturalist, why is the species number different in my city's project vs. in the umbrella project? Which one will count for the results?

We use the numbers in each city’s project, so you can think of it as branch tips (or “leaves”) - if there are observations identified to a genus but nothing in that genus is IDed to species, then the genus itself will count as a “species.” If there are observations identified to a family but no observations IDed to a genus or species in that family, then the family counts as a “species.” This is how “species” are counted in collection projects.

For the overall collaborative results, we will use the number in the umbrella project.

When are the results announced?

Remember that this year the results will the the collaborative effort of everyone around the world - the CNC is no longer a competition. So the results announced this year will only be the numbers that we all achieved together. However, we will still be keeping track of individual city's results, mainly so we can continue the dataset we have from the previous 4 years of the CNC. So two important pieces: the results for YOUR CITY will be whatever the numbers are in your project on Monday, May 4 at 9am YOUR LOCAL TIME. It takes almost 24 hours to get the numbers from all the cities, since our cities in New Zealand and our cities in Hawaii are 23 hours apart by time zone. So the very last cities to hit 9am on Monday May 4 are in Hawaii. Results will be announced within 2-3 hours of that time, around 2pm Pacific time.

What are the data used for?

On iNaturalist, all the data are freely available to anyone interested in downloading them. iNaturalist observations are used in hundreds of scientific publications. Many of them are using data that is shared with the Global Biodiversity Information Facility as part of the iNaturalist Research-Grade Observations dataset. You can browse the ongoing list of the publications that have cited a GBIF dataset containing at least one record from iNaturalist.

However, we usually find the most immediate use of CNC data happens at a local level: a discovery of a new-to-that-place species, someone documenting a population of a rare or invasive species that wasn't previously known, better understanding of where particular species are in that area, etc. So any local governments, parks departments, or other organizations who track biodiversity/invasive species/rare species in the area that are involved in the City Nature Challenge will likely use the data produced to make more-informed management decisions.

How can I share about the City Nature Challenge on social media?

Tag any post with #CityNatureChallenge! You can also tweet at us: @citnatchallenge. This year we're also encouraging people to take a #CNCNatureSelfie so we can see you looking for nature in & around your home!

Tips for Taking Photos During the City Nature Challenge

The photos you take during the City Nature Challenge are there to provide evidence of the organism you saw, and to help confirm the identification of that organism. Therefore, taking good photos is key to participating in the CNC! Here are some tips to taking photos:

The Computer Vision/Artificial Intelligence (AI) on iNaturalist is a fun and useful feature that can provide real-time feedback about the observations you’re making. The iNaturalist AI will give you suggestions for ID, but they’re just that—suggestions. Because of this, there are some things to keep in mind to make sure you’re using the AI in the best and most responsible way: