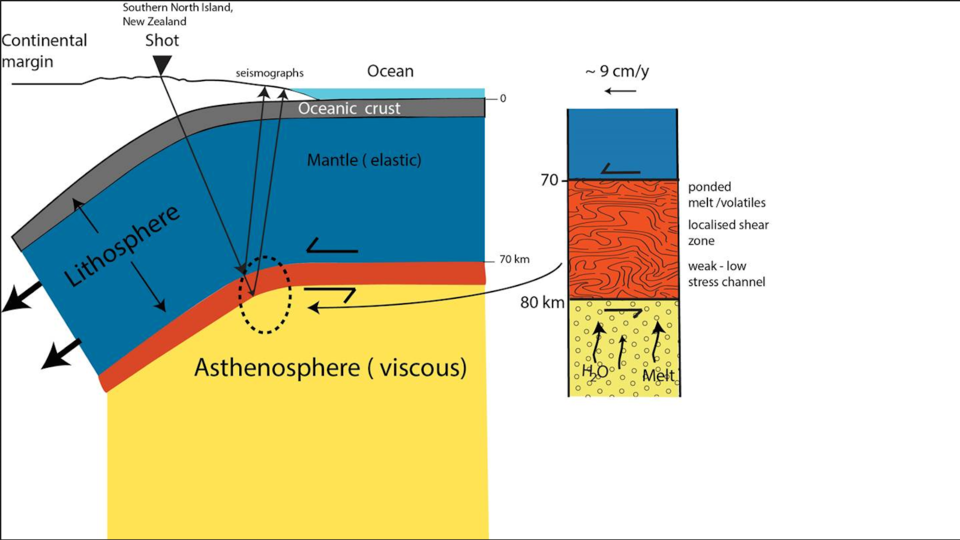 They’re some of the oldest features on our planet. Yet our scientific understanding of plate tectonics is barely a century old—and it wasn’t until the 1960s that it became a serious field of study. As residents of San Francisco can attest, nothing can accurately predict when and where an earthquake will occur. This gap in our knowledge is an exciting opportunity for seismologists who study earthquakes, a field that’s wide open for new understanding and exploration.

This week in Nature, researchers in New Zealand wrote that they successfully used twelve artificial earthquakes—what we lay people call explosions, caused by 500 kilograms (1,100 pounds) of dynamite each—to map the bottom of a tectonic plate that is slowly sliding underneath the land of the kiwi.

Using dynamite wasn’t just for fun. It allowed the research team to get a look at the lithosphere-asthenosphere boundary (LAB)—the region of Earth’s interior where we actually see tectonic plates “floating” on rock of different density, able to slowly shift the continents, or occasionally move quickly and violently.

The LAB lies about 70–80 kilometers (45–50 miles) beneath the surface. Compare this to the deepest human-made holes: the TauTona Mine in South Africa is less than four kilometers (2.5 miles) deep, and the deepest scientific boring hole is just a shade over 12 kilometers (7.5 miles) to the very bottom. But to a pressure wave created by an earthquake—or an artificial explosion—that depth is a cinch, traversed in about 30 seconds.

Just like in an ultrasound, pressure waves change speed and direction when they travel through dissimilar materials. We can measure those changes in order to draw a picture of what’s happening deep within Earth. In this case, the artificial waves reflected back to the surface when they encountered rock of different density. The lithosphere, on top, is cooler and more rigid, better able to conduct pressure waves than the lower asthenosphere, which is hotter and more like a fluid.

Studying waves traveling through our planet is not a new technique. Earthquakes help us decipher Earth’s structure (even when they bring down buildings) because they create natural pressure waves that scientists use to learn more about the unseeable parts of our planet. In fact, the existence of the LAB was confirmed in the 1960 Chilean earthquake: with a magnitude 9.5, it’s famous for being the most powerful earthquake ever recorded. But waiting for another tectonic shift is an unpredictable method of gathering data, which is why scientists turned to artificially-generated earthquakes.

These recent experiments had wavelengths of 10–40 kilometers (5–25 miles): so large that it was impossible to get a good image of the rock underneath. Using dynamite, the New Zealand scientists got that wavelength down to less than one kilometer (around six-tenths of a mile), improving their image resolution and allowing them to draw a precise underground line where the lithosphere and asthenosphere intersect.

While the true cause of earthquakes and the ability to predict them may be far off, it’s good to know we don’t have to wait until the next temblor to learn more about the third rock from the Sun. And next time your neighborhood trembles due to the movement of tectonic plates, think about all the valuable data that will be collected and used to help us understand these earthshaking events.