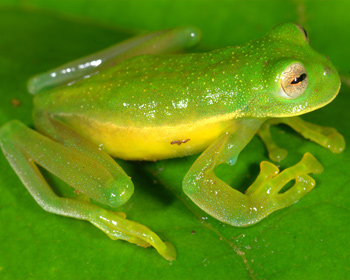 When you hit a milestone, what do you do? Sing about it, of course!

This week, UC Berkeley announced the amazing growth of its project, AmphibiaWeb, an online catalogue of the world’s amphibians created to encourage more field monitoring and lab studies of the threatened animals.

David Wake, an Academy fellow from UC Berkeley, started the project in 2000 because amphibians were declining at a terrifying rate and he was concerned we’d lose species we didn’t even know existed. “In 1985, there were a handful of amphibian biologists in the whole world,” he says. “Now, the numbers [of scientists] have increased dramatically, and we are getting to the ends of the earth.”

The Academy’s amphibian biologist Dave Blackburn has contributed to AmphibiaWeb for about ten years and recently became more involved in expanding the project. “I joined the steering committee nearly three years ago. I actively work as part of a team on issues related to the systematics displayed on AmphibiaWeb, but, perhaps more importantly, am actively invested in ways of improving our services, such as an iPhone app (available for download now, but major improvement coming soon!), summary diagrams of evolutionary relationships among amphibian groups, and general ideas for improving the content for diverse viewers.”

The more viewers the better. Earlier this summer, the International Union for the Conservation of Nature and Natural Resources (IUCN) assessed that about 41 percent of amphibian species are at risk of extinction, and some are already extinct. These charismatic creatures are disappearing for many reasons—a warming Earth, increasing population, widespread use of pesticides and a deadly fungus.

Now that’s something to sing about! “An undergraduate researcher assisting with AmphibiaWeb suggested the idea of a song when it came to celebrating the scientific description of the 7,000th amphibian,” Dave explains. “We've known since early this year that we'd probably hit number 7,000 some time in the summer based on the rate of descriptions of new species over the past few years. I happen to have a good friend (Conor Loughridge, performing as The Wiggly Tendrils) from college that writes songs for a living. We asked if he would be willing to help us out, and when he said yes, Conor and I worked together on content for the song (though the rest was left up to him to make it catchy and fun!).

“The general idea is to simply catch attention,” Dave adds. “The idea is to highlight the excellent work done by amphibian biologists around the world and the fact that we are still in a crisis. We are losing many populations and species of amphibians around the world due to climate change, habitat degradation and destruction, disease and pollution. In some cases, we’ve lost them before we even knew they existed.”

What a great way to spread the news! Is the tune stuck in your head yet? Pass it along!