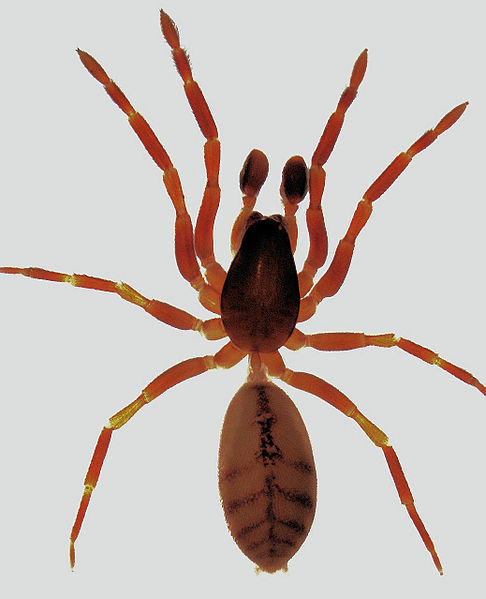 The Academy and University of California researchers wanted to determine how these spiders are related and distributed and how that’s changed for the millions of years they have lived on Earth.

This superfamily has been assembled and separated many times over the past three decades.  The superfamily includes the trap jaw spiders (Mecysmaucheniidae), forest rubies (Stenochilidae), the mysterious Hutton’s spider (Huttoniidae), palp-footed spiders (Palpimanidae) and the pelican spiders (Archaeidae).

They're called assassin spiders because all of the families except the trap jaw spiders hunt, kill and eat other spiders. Trap jaw spiders have an unusual feeding pattern, too. They have incredibly strong and fast jaws that lock open and then release quickly to trap prey.

While most of the living species within the assassin spiders live in the southern hemisphere, grouping these spiders is tricky because they have disjunct distributions, separated by barriers, namely large oceans.

Scientists love when things are tricky: it raises new questions to research. That couldn't be more true for this group of folks. Charles has always been interested in biogeography and continental drift. Rosie Gillespie has always been interested in life on islands—what lives there, how did it get there and how did it diversify? Hannah's fascinated by the pelican spiders and Nick is a paleontologist and computational biologist, attracted by the statistics of dating phylogenies.

It's good that their interests are diverse, Charles says. “Science has become technologically and mathematically complex. It now requires a team of researchers.”

Hannah and Charles traveled throughout the southern hemisphere collecting and studying these spiders for many years. To answer the tricky questions this superfamily poses, they began with a thorough comparative morphology of all the spiders, living and extinct. Many of the fossils were specimens trapped in amber—which preserves the spiders “like new,” Charles says.

The scientists used whatever tools they could get their hands on—microscopy, current dissection technology, CT-scans, even the synchrotron at the Advanced Light Source at UC Berkeley.

The team gleaned data from DNA collected for every living spider. Then came the number crunching. Data were processed on the computer cluster here at the Academy and the San Diego Super Computer Center.

First, they confirm that these spiders all belong to Palpimanoidea.  “The phylogeny and classification encompasses the true scope of the superfamily,” Charles says.

Third and fourth, these spiders are found on the islands of Madagascar and New Zealand.  Geologists know that these two islands were originally pieces of their nearby continents that became separated. When they broke-off is clear, Charles says, but what is controversial is if some life forms have been around since the islands were connected to continent. .  Many animals and plants may have dispersed there.  The dates of these spiders originate prior to island separation, showing they have endured since the islands first broke away from the continents.

If you've seen our Earthquake exhibit, you know there are other examples of animal and plant evidence of continental drift. These spiders add nicely to it.

The study was published last month in Systematic Biology.

Charles will now take these methods to look at the biogeography of other groups of spiders. Hannah is looking more deeply into the trap jaw mechanism of those amazing spiders. Stay tuned for more spiderific stories!