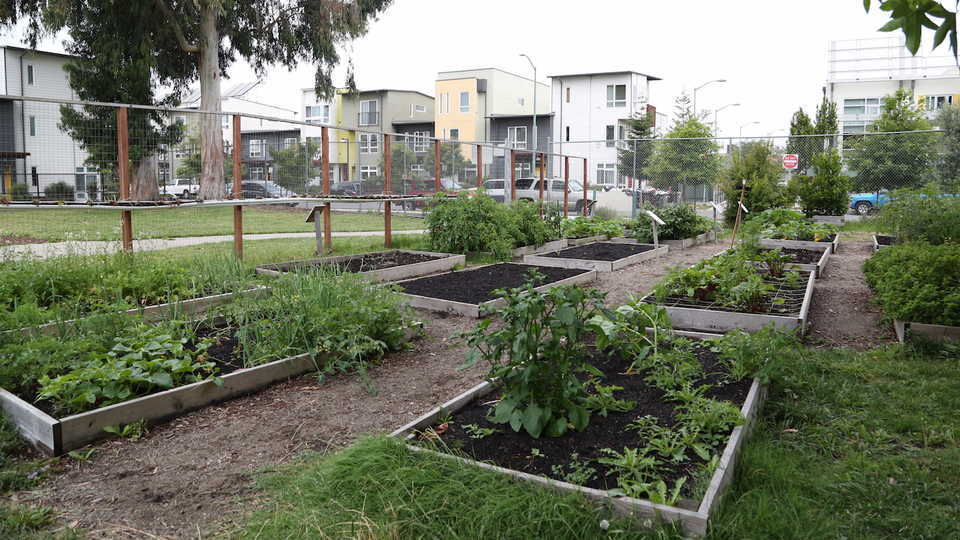 Last month, the Science Today team had the opportunity to visit three very different Bay Area urban farms. Urban farms are part of a movement to bring fresh produce to people who often have no access to healthy food—and a way to take a small amount of the pressure off using more land to feed our growing population. The farms we visited are very small and often use unconventional methods and new technologies, employing land and space in very diverse ways.

Acta Non Verba (pictured above), which shares space with a park in East Oakland, was founded in 2010 by Kelly Carlisle, “who returned to East Oakland and saw that the community had few positive outlets and activities for the youth,” according to Acta Non Verba’s Amani Ali. So why not farm? Youth are taught how to grow and care for food crops, and money raised from selling these crops goes back to the youth in the form of college funds. “It’s important that children understand how to grow food,” Ali says. “It helps physical growth, aids in personal empowerment and builds healthy self esteem by raising expectations for [the children] and their community. The importance of sustainable growth teaches children how to continuously support themselves and members of the community.”

Across town in West Oakland is Green Skies Vertical Farm, whose founder David Ceasar wanted to create a portable farming system. The farm actually started in car repair lot in Berkeley in 2013, only recently relocating to Oakland. His mobile system of crops in gutters, tubs, and other above-ground planters now resides in the vacant yard next to an old Victorian house. He simply rents the space—talk about transient!

Ceasar used to manage an organic farm in California’s agriculturally rich Central Valley. “We’d travel long distances to bring crops to farmers' markets in the Bay Area,” he says, “but how much we would sell would be a crap shoot, depending on competitors, weather, and more. A lot was wasted.” So why not farm closer to the markets? “There are so many vacant lots in the area, and we’re not planting in the ground, so it’s non-invasive.” Some of the herbs and tomatoes are soil-based, but other herbs and micro-greens are grown hydroponically, without soil. A small, sustainable operation (just Ceaser and one part-time employee), Green Skies uses very little water, too, utilizing drip irrigation and recirculating the water through various crops.

Their delicious daikon micro-greens (great for salads and sushi) and other produce are available through CSAs such as Good Eggs and Phat Beets and the neighborhood Mandela Farmers Market.

Growing Up Farms, hidden in a warehouse in the Excelsior district of San Francisco, is another young farm with large ambitions. Started in May 2014 by Mark Hintzke, the indoor farm uses LED lights and aquaponics to grow its small selection of crops. The method employs fish in a separate tank to provide nutrients in the water that is then pumped to the plants, and the plants in turn clean the water that is pumped back to the fish. This closed-loop technique uses a type of clay instead of soil, and creates a water-efficient system. (There are concerns about the high energy-use of these types of farms. For more information, click here.)

Growing Up Farms is still in its infancy, taking up only a small percentage of the warehouse space it currently occupies, but Hintzke has grand plans for the future. “It’s just in a proof of concept phase now,” he says. “We’re planning to build into the entire building, not just the floor space, but up the walls, in trays, and on the roof.” He gets his inspiration from other vertical farms around the country.

The farm currently grows basil, leafy greens, beans and tomatoes, and sells the produce to a cafe three blocks away. The non-profit also has a greater mission than just urban agriculture. They want to connect local people with their food, empowering them to make better choices and gain access to more nutritious foods. To that end, Growing Up Farms has community groups come into the farm for education and training programs.

Three urban farms, operating very differently and setting the course for urban agriculture in the future. Where will our food come from in the decades to come? What will the urban landscape look like with farms—vertical and otherwise—as part of our cities? Who knows, but it will certainly be thrilling to witness this kind of urban sprawl!