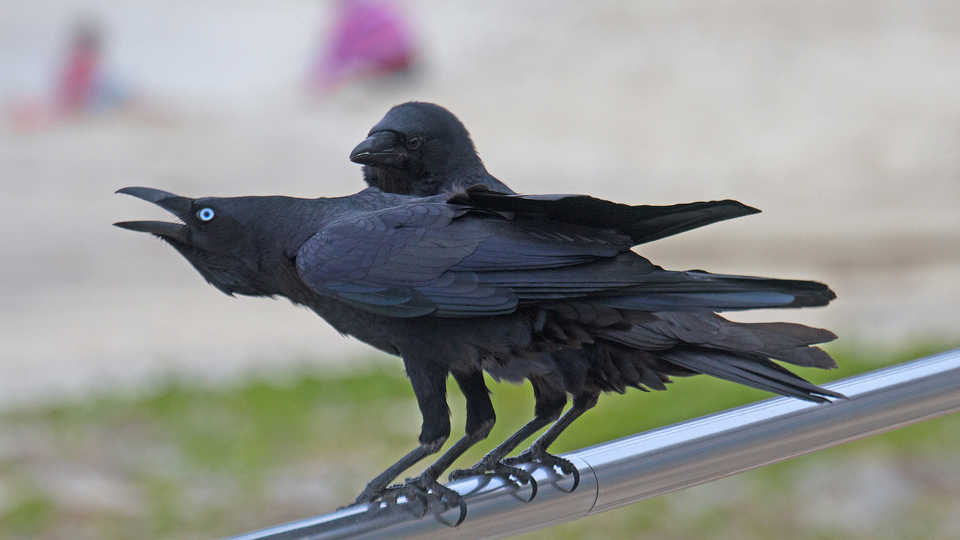 It’s no secret that corvids are smart birds, possessing problem-solving skills that may rival a human five-year-old. With this aptitude comes complex social behavior, and Science Today looks at some fascinating interactions between corvids and the interspecies world at large.

Social interaction within corvid communities has been a growing topic of research, and the mechanisms of behavioral advantage are becoming more clearly understood. Ravens demonstrate sabotage against competitors, jays recognize their dead, and rooks display advanced pair bonding and cooperative activities. Additionally, corvid “language” is a complex system of communication that includes warnings, camaraderie, sophisticated mimicry, and perhaps simple entertainment. More studies are currently being developed in this field.

If corvids relate to one another with a keenly developed awareness, their interactions with other animals range from compelling to downright comical. A recent picture of a crow seemingly riding an eagle has received much public attention, but crow specialist Kevin McGowan of the Cornell Lab of Ornithology explains that this joyride most likely began as an attack of territorial defense. Similarly, tail-pulling is observed in many corvids as a method of distraction and aggression. Many instances abound of play and food-sharing between corvids, cats, dogs, and other animals, but it is unclear whether these are constructive bonding activities, merely recreational, or have other purposes.

Lastly, our own co-evolution with these “feathered apes” has a long and colorful history, but growing cities and habitat encroachment have made for some interesting dynamics in the spaces we share. Documented aptitude for facial recognition can make crows either friendly or menacing neighbors—and beneficial behavior by humans is equally remembered as well, to sometimes charming effect. What may be even more amazing is that demonstrated evidence exists for crows “teaching” their offspring which humans to avoid, with juvenile crows shunning the select offenders on first exposure. Corvids are amazingly resilient, and are often drawn to urban areas for easy sustenance, social stimulation, and perhaps a slightly warmer environment. Ravens have adapted to utilize many manmade structures as nesting advantages, and crows have conveniently used oncoming cars to repeatedly crack nuts for consumption.

It is easy to depict intelligent corvid behavior as anthropomorphic, and many corvid activities have captured our hearts, imaginations, and suspicions over time. But with continued research, we can hope to understand these amazing birds on their own terms and learn more about their complex and fascinating world.