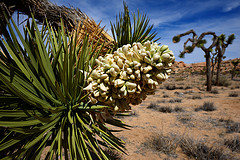 Humans aren’t the only creatures affected by the prolonged drought we’re enduring in California. Many of our floral and faunal friends rely on rain, rivers, streams and snow for survival. Their routines have already been altered by the lack of rain. And more change is sure to come with little precipitation on the horizon. Here is a quick look at just some of the powerful effects the drought is having on our state.

One of the scariest by-products of drought is the increased danger of wildfires. When regular winter rains are absent, forests and grasslands are left vulnerable to fire. The California Department of Forestry and Fire Protection (CalFire) has staffed up for this unusually dry and dangerous winter by hiring 125 additional firefighters in Northern California and keeping seasonal firefighters on the payroll  in Southern California.

In the winter when we see a fire … it typically will burn at a slow rate of spread. And take an engine to put it out. This season, it’s taking a much larger response and even some aircraft because the grass and the brush wants to burn.

And CalFire numbers offer a glimpse of the danger: From January 1 through January 25 of this year CalFire responded to 406 wildfires. But in that same time period for the past five years, the average was just 69 wildfires. Meteorologists don’t expect much rain in 2014 during the usually wet spring months, so the heightened fire danger is expected to continue straight into the summer.

Wildfires displace animals, sometimes pushing them into human populations to search for food and shelter. The hunt for water in a dry climate can also force animals into unsafe interactions with humans.

They are very adaptive and very mobile, so they will usually be able to take care of their daily needs in a drought situation. But then they're coming down to the lake to drink a lot, coming down for food. If the drought persists, it greatly increases the odds of a negative interaction with people.

And there have been more sightings of smaller animals in backyards of late, too.

The lack of water and food is affecting ranch and farm animals around the state. Ranchers are selling cattle and horses that they can’t afford to keep in the dry conditions.

Migrations and hibernations are also being thrown off by this unusual weather.

Monarch butterfly numbers are falling, in part due to lack of food and the changing weather patterns along their migration route. The butterflies’ winter destination is Mexico; they travel thousands of miles south from Canada and the United States. Some settle along the warmer parts of the California coast, like Pacific Grove, near Monterey.

The San Francisco Chronicle has found that:

This year's winter count of monarchs in the Sierra Madre of Mexico was the smallest recorded since 1993, when entomologists began keeping records, according to a study by the World Wildlife Fund.

And newts are staying in hibernation, though they normally would be out and about this time of year.

Plants have been reacting to the drought, too. In Joshua Tree, scientists have reported seeing giant blooms on the Joshua trees­­–blossoms sprouting in sizes never before seen. But scientists suspect these unusual displays could be signs that the plants are dying in the dryness.

If you're a Joshua tree and you're going to die in a year or two, the best thing you can do … is use what little energy you have left to reproduce.

The state’s fish population is also in a dangerous spot, prompting officials to ban fishing in drought-affected rivers and streams. In particular trouble are coho salmon, which cannot get to their native streams due to lack of rain, and Chinook salmon, whose nests were exposed when the Sacramento River level fell in early November.

The extended drought is endangering birds around the state. It’s already forced some waterfowl to change where they land and where and when they fly. And more months without rain will start to affect their breeding, scientists say.

If there is no rain going into summer – that would be bad. It doesn’t mean that ducks are going to disappear from the landscape. But less water means that hens do not have an area to take their broods, or ducklings. They don’t have a safe place to molt.

But some humans are pitching in to help. Farmers in the Central Valley are being asked to keep their fields wet a little longer in hopes of helping out our feathered friends. The innovative experiment, spearheaded by The Nature Conservancy, is being conducted in hopes of giving millions of birds a bit more water in which to rest and feed during their annual migration.

For those of us without farms along the Pacific Flyway, here’s a list of things we can do to conserve more water. And, if you’re up for it, organize a rain dance–it couldn’t hurt.