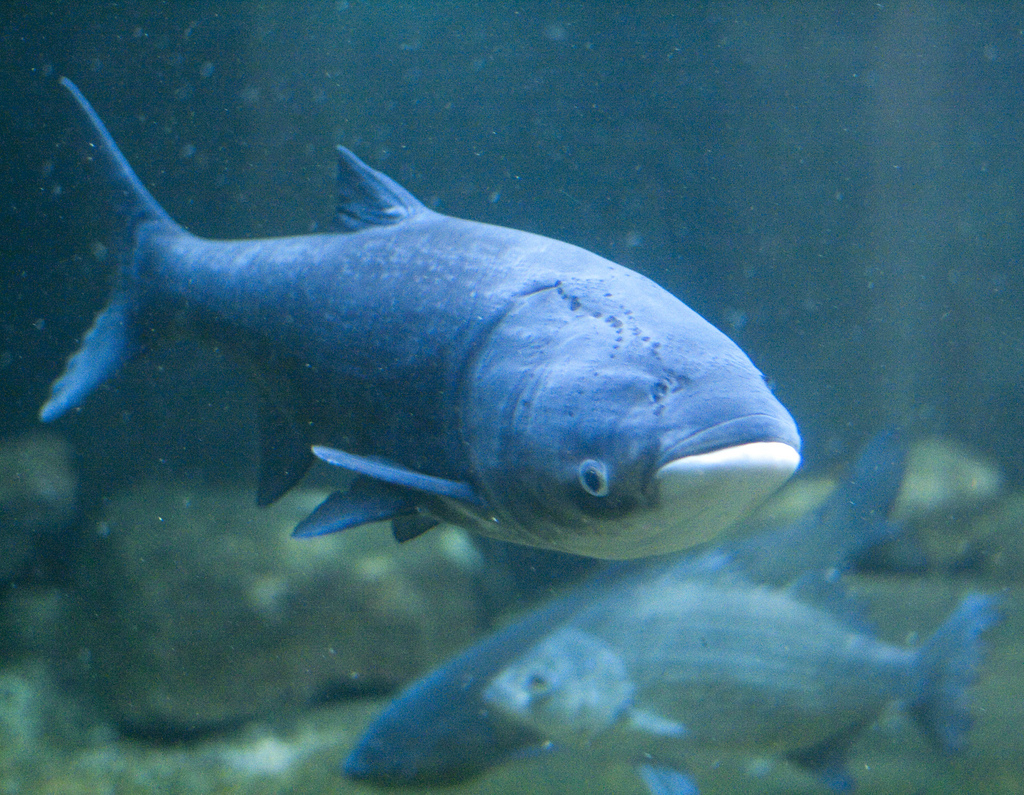 In California, politicians, environmentalists, farmers and fishermen talk a lot about the Delta smelt. In the Midwest, the fish causing all of the trouble is the Asian carp.

What we call Asian carp here in the US are actually four species of fish, according to the USDA: the Bighead carp, black carp, grass carp and silver carp. They were originally brought to the US to do good. According to NPR:

Originally imported to help control algae in fish farms and water treatment plants in the South, Asian carp made their way into Louisiana rivers, possibly during floods in the early 1990s, and spread quickly up the Mississippi River and its tributaries.

Lake Michigan is connected to the Mississippi by a series of artificial locks that bring commercial ships into and out of the Great Lakes and specifically the Chicago area. Barriers have been built to keep carp out, but recently, one of these invaders was found past the barrier, in Lake Cascade, six miles south of Lake Michigan. The New York Times quoted Henry Henderson of the Natural Resources Defense Council reacting to the news:

Asian carp are like cockroaches; when you see one, you know it’s accompanied by many more you don’t see.

Why the barriers? Are Asian carp so bad? Well, here’s what Time has to say:

They can weigh up to 100 pounds and measure up to 20 feet, and eat 40 percent of their weight daily in plankton, thus knocking out the bottom of food chains. Even crazier, they launch themselves out of the water when startled, often hitting — and injuring — boaters.

It’s hard to say if these fish will cause problems for the native species in the Great Lakes, according to the Academy’s Peter Roopnarine, PhD. He does a lot of work with food webs that include both native and non-native species, and says that, “it’s not clear why some exotic species become established and some don’t.” For example, the San Francisco Bay has many invasive species, but none have yet to cause native species to go extinct.

That doesn’t stop the controversy, though. The Asian carp have swum right into the middle of one, with several groups taking sides. 80beats from Discover described it this way, earlier this year:

On one side, many environmentalists, as well as people who rely on Great Lakes fishing for their livelihood, have called on the federal government to shut down locks that connect the river to Lake Michigan…

…Naturally there’s one group that would be mighty upset at closing the shipping locks: shipping companies.

Earlier this month, the governor of Illinois, hoping to find a solution that won’t close the locks, announced a plan to open a fish processing plant and export the carp to China.

Then, this week, five states filed a lawsuit against the Metropolitan Water Reclamation District of Greater Chicago and the Army Corps of Engineers. Per AOL,

The lawsuit seeks an order to close Chicago shipping locks that provide a century-old pathway to the Great Lakes via the Mississippi River basin. The lawsuit was filed by Michigan, Wisconsin, Ohio, Minnesota and Pennsylvania.

Who expected a fishy tale could get this large? Those of us in northern California know it only too well— the state involvement, debates, lawsuits—sounds like the Delta smelt. Except, ironically, the smelt are native to this area and have to compete with larger, invasive fish.

What will be the next big fish to fry?