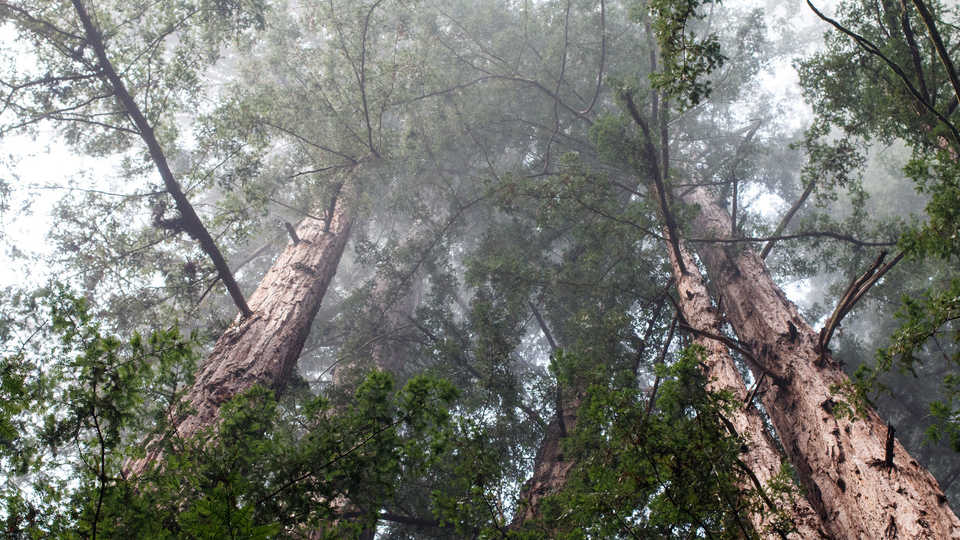 More news from the annual American Geophysical Union (AGU) meeting here in San Francisco, from sessions that covered two phenomena near and dear to Californians: fog and the recent drought-inducing warm water blob.

The Science of Fog

Fog is fickle, Kenneth Coale said in a press conference Wednesday about the grey stuff that San Franciscans are all too familiar with. But that’s what makes oceanographers like him want to study it. He spends a lot of his time chasing it, trying to catch it. Why? Fog is essential to many of our coastal ecosystems. Terrestrial systems such as redwoods and chaparral are dependent on the moisture that the fog brings. And since fog can limit the amount of sunlight that hits the ocean, it affects marine ecosystems as well.

Clive Dorman of San Diego State University explained what constitutes fog: a cloud touching the surface of the ground, resulting in reduced visibility. It’s the height and density that differentiates fog from mist. Along the coast from San Francisco to southern Oregon, we experience fog 16 percent of the time. And Dorman’s measurements show that fog has increased in this area over the last 50 years, by just over seven percent.

Scientists measure fog on the sea surface (from buoys and boats) and on land along the coast. Coale and Peter Weiss-Penzias use these measurements to understand how mercury is transmitted through fog from the ocean to land. Mercury from the atmosphere, released by smokestacks, mining, and other human causes, gets absorbed in the ocean. Humans notice this absorption in the seafood we eat. The mercury also can escape back into fog, Coale and Weiss-Penzias have found, transferring the toxic mineral back to land along the coast. And the amount of mercury in fog is far greater than in rainfall, the researchers explained. These results are consistent to what the researchers have discovered in spiders and redwood trees in the area: elevated levels of mercury.

The Blob and Beyond

Over the past two years, the warm water blob in the northeastern Pacific has affected weather here in California (the drought) and sea surface temperatures along our shoreline. Looking at the recent pattern of warmer waters off the California coast, today three scientists discussed the past effects of the blob and current and future effects of El Niño. The blob had nothing to do with El Niño, NOAA’s Nate Mantua said, and everything to do with shifts in atmospheric wind patterns in the central Pacific. Yi Chao explained that the warm water blob preceded warmer waters along our coast and in the San Francisco Bay by about six to nine months, and should we see a phenomenon like the blob in the future, this might better prepare us for the sea life mortalities (from fish to birds to marine mammals) we witnessed over the past year.

Raphael Kudela focused on levels of domoic acid found in Monterey Bay during this warm water episode. The acid, which causes a condition known as shellfish poisoning, is produced by algal blooms that occur when water temperatures get warmer. Planktivores such as small fish and shellfish consume the acid-laced algae and domoic acid works its way up the food chain. Researchers had thought that domoic acid only lasts a short time in the ecosystem following a bloom. For planktivores such as anchovies, we expected the substance to go in one end and out the other, not staying in the animals’ bodies for extended periods of time. But Kudela tested these fish during algal blooms this past spring and found evidence of high levels of domoic acid prevalent in the body (or filet) of the fish—the part that marine mammals and humans consume. This prolongs the amount of time domoic acid is present in an ecosystem after an algal bloom. Kudela and his team tested other fish, too—rockfish, market squid, lingcod, halibut, salmon, mackerel—and everything they tested had elevated levels of domoic acid, sometimes ten or a hundred times greater than the levels allowed by regulators for consumption. And like the anchovies, the toxin was found in the filets.

With El Niño and the warmer waters associated with that event, Kudela sees this trend continuing into the spring, affecting not only the seafood we consume, but the animals that consume these fish, too. Sadly, he expects more marine mammal strandings into 2016.