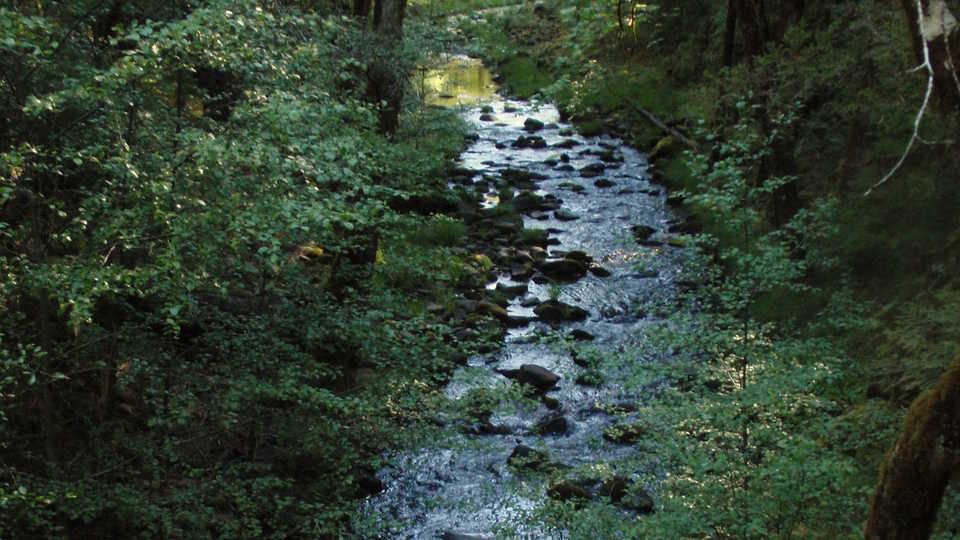 Next month, Habitat Earth opens in the Academy’s Morrison Planetarium. The show describes the interconnectedness of life, and how humans are an intricate part of a global ecosystem. To celebrate the show’s premiere, Science Today is talking to many of the scientists who advised the production team; all our productions are rooted in real data and real research, so we thought we would highlight some of the science behind the scenes.

The Angelo Reserve is a research forest, one of 40 natural reserves run by the University of California Natural Reserve System. It’s been under protection since the 1930s and includes one of the largest tracts of continuous coastal conifer forest still left in our state, including some old-growth trees. Researchers can start and maintain a long-term project without concerns of someone disturbing it, Power says. Scientific and educational use is managed to protect the site in its natural condition.

Power and her team study bacteria, algae, invertebrates, fish, birds and mammals in and around the Eel River, focusing on how these organisms interact with one another. She started her career as a fish biologist, studying how fish behavior is influenced by how scared and how hungry they are. “I couldn’t understand fish behavior without looking at their food and safety,” she says, opening up her studies to the entire food web in the ecosystems where these fish lived.

The Eel River ecosystem that she studies could be under threat with prolonged drought and human water withdrawals. “We could see an ecosystem flip,” Power describes. The salmon in the Eel River need cool, well-oxygenated rivers to live. With less water and more disconnected streams, a whole new ecosystem could develop, with more outbreaks of toxic cyanobacteria, Power warns.

A healthy river ecosystem is dominated by algae called diatoms—producers at the base of the food web. These nutritious algae feed other organisms that then become food for even more organisms, including salmon and other vertebrate predators near the tops of food chains. In stagnant, warm water, however, cyanobacteria can smother and poison these diatoms. Power says that there have been eleven dog deaths due to neurotoxic cyanobacteria in the Eel River since 2001, likely caused by licking their fur after plunging into Eel backwaters laden with these cyanobacteria. Not a good sign.

But overall, the health of the north coast ecosystems are on a good trajectory, she says, finally recovering from the destructive logging and the mega-floods of the 1950s and 1960s. It’s a great place for people to live and work with the natural environment in ways that allow both humans and nature to thrive.

The production team for Habitat Earth visited Power and her colleagues in the Angelo Forest last spring, and the Eel River’s ecosystem and water cycle are prominently featured in the final show, which opens January 16. The scientists were happy to host the crew. “[Those scenes] make the science accessible. It’s great to have the audience empowered by understanding how nature works up there,” she says. “It’s great to have the Academy as a partner in this.” Especially in providing a big-picture view of these food webs, Power says. “You can’t protect species, including humans, unless you know what is controlling their food and their safety, and these controls are woven through webs of ecological interactions.”