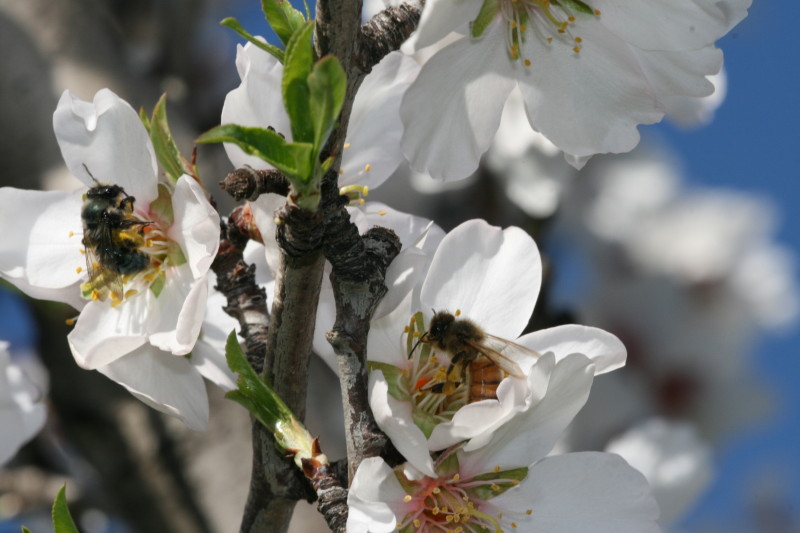 Happy Pollinator Week! We didn’t want you to miss this important event celebrating some of the hardest workers in all of the natural world. From bees and flies to bats and birds, pollinators play a critical role in the ecosystem and the economy.

In fact, German scientist Alexandra-Maria Klein, working with UC Berkeley researchers recently determined exactly how important pollinators are. Reporting on their studies in Plant Biology and PLoS ONE, the researchers found that a lack of pollination—via bees and other pollinators—causes a greater reduction in harvest yields than either insufficient water or fertilizer.

The team observed the effects that different conditions and treatment combinations had on almond trees. In some cases, the researchers prevented bees from pollinating blossoms via cages, in others, they allowed the bees to pollinate the blossoms, and in the rest, the team pollinated the blossoms by hand. Additionally, researchers combined these conditions with four different treatments—watering and fertilizing the trees according to local practices, reduced watering, no fertilization, or reduced watering with no fertilization.

The hand-pollinated almond trees produced the most nuts, but very small ones. Conversely, a tree that was left un-pollinated produced very few nuts, although the ones that it did produce were very large. The trees pollinated by bees had an approximately 200 percent higher yield than the trees that had self-pollinated.

Fertilization and watering had an effect on harvest yield only when combined with the pollination manipulations.

Sadly, honeybees and other pollinators have been experiencing a rapid and ongoing population decline in the U.S. and other parts of the world since 2006. This has a profound impact on the stability of ecosystems, the economy, and our food supply. A May 2013 report by USDA found that one in three bites of food depends on pollination, mainly by honey bees, and that pollination is valued at $20 to $30 billion annually.

Nuts and fruits are not the only products for which we rely on pollinators—pollinators also play large roles in essentials such as chocolate and tequila. Cheers!

Not finished celebrating? National Geographic has an article with four pollination facts you likely didn’t know, and this morning, at 10:00 a.m. Pacific Time, the Smithsonian is hosting a live tweet to celebrate (#SIpollinator). Or beecome a bee activist! Learn more here.