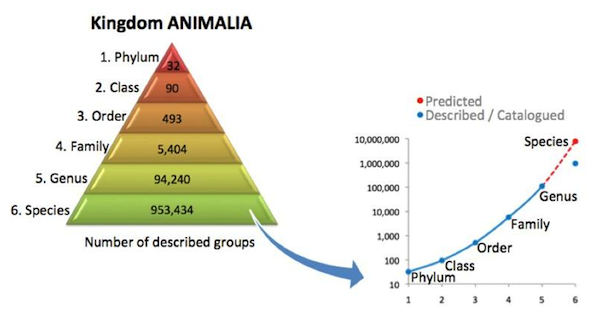 That is a new, estimated total number of species on Earth—the most precise calculation ever offered—with 6.5 million species found on land and 2.2 million dwelling in the ocean depths.

Until now, the number of species on Earth was said to fall somewhere within the large range of 3 and 100 million.

The new study, published yesterday in the open access journal PLoS Biology, says a staggering 86% of all species on land and 91% of those in the seas have yet to be discovered, described and catalogued.

Says lead author Camilo Mora of the University of Hawaii and Dalhousie University in Halifax, Canada: “The question of how many species exist has intrigued scientists for centuries and the answer, coupled with research by others into species’ distribution and abundance, is particularly important now because a host of human activities and influences are accelerating the rate of extinctions. Many species may vanish before we even know of their existence, of their unique niche and function in ecosystems, and of their potential contribution to improved human well-being.”

“This work deduces the most basic number needed to describe our living biosphere,” says co-author Boris Worm of Dalhousie University. “If we did not know—even by an order of magnitude (1 million? 10 million? 100 million?)—the number of people in a nation, how would we plan for the future? It is the same with biodiversity. Humanity has committed itself to saving species from extinction, but until now we have had little real idea of even how many there are.”

The team refined the estimated species total to 8.7 million by identifying numerical patterns within the taxonomic classification system (which groups forms of life in a pyramid-like hierarchy, ranked upwards from species to genus, family, order, class, phylum, kingdom and domain).

Analyzing the taxonomic clustering of the 1.2 million species today in the Catalogue of Life and the World Register of Marine Species, the researchers discovered reliable numerical relationships between the more complete higher taxonomic levels and the species level.

Carl Zimmer explains the method in his Discover blog, The Loom:

The method is based on Linnean taxonomy. While we have lots of new species left to find, we may have found most of the classes, orders, and phyla. It turns out that for a number of groups–mammals, birds, and so on–the numbers of each of these rankings rise as you descend the hierarchy.

(See the graph above, courtesy of the Census of Marine Life, via The Loom.)

When applied to all five known eukaryote (see below) kingdoms of life on Earth, the approach predicted:

(In case you lost track… Organisms in the eukaryote domain have cells containing complex structures enclosed within membranes. The study looked only at forms of life accorded, or potentially accorded, the status of “species” by scientists. Not included: certain micro-organisms and virus “types,” for example, which could be highly numerous.)

But not everyone buys into this calculation. First of all, it doesn’t include the entire picture of life, according to Nature News.

The method does not work for prokaryotes (bacteria and archaea) because the higher taxonomic levels are not well catalogued as is the case for eukaryotes. A conservative ‘lower bound’ estimate of about 10,000 prokaryotes is included in Mora's total but, in reality, they are likely to number in the millions.

And, from the New York Times:

Jonathan Eisen, an expert on microbial diversity at the University of California, Davis, said he found the new paper disappointing.

“This is akin to saying, ‘Dinosaurs roamed the Earth more than 500 years ago,’ ” he said. “While true, what is the point of saying it?”

But one of their biggest fans, the well-respected Lord Robert May of Oxford, past-president of the UK’s Royal Society, published a commentary adjacent to the study, praising the researchers’ “imaginative new approach.”