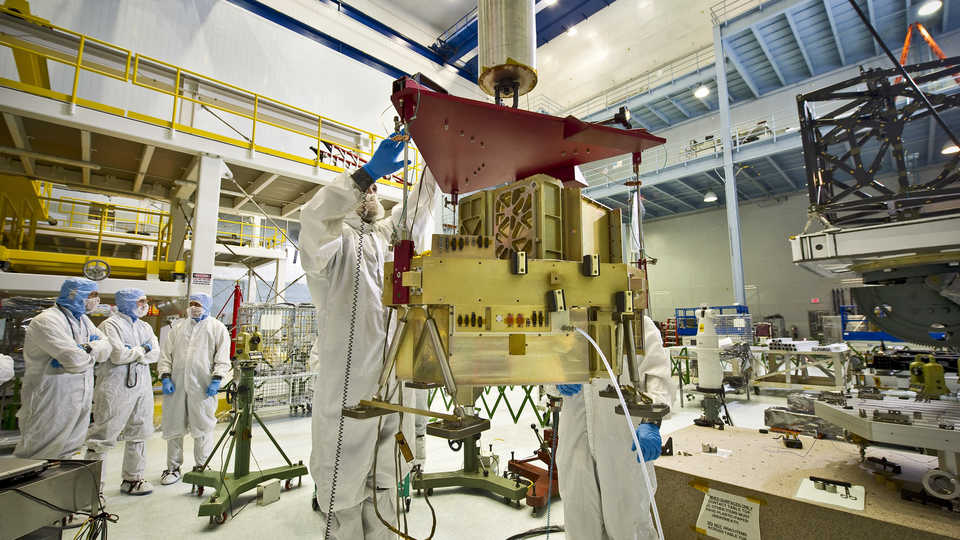 The 223rd American Astronomical Society meeting in National Harbor, Maryland, has come to a close, but while I was in the area, I had a chance to tag along with several science journalists visiting NASA’s Goddard Space Flight Center in Green Belt, Maryland. As NASA’s original space center, Goddard has a long and storied history, having developed and managed numerous missions—such as the Hubble Space Telescope, the Cosmic Background Explorer, and the Solar Dynamics Explorer, to name a few.

As I mentioned in yesterday’s post, Hubble typically gets a lot of attention at astronomy conferences, particularly with its attention-grabbing images. But after four servicing missions and nearly a quarter century in operation, Hubble clearly can’t last forever. So what’s next…?

The short answer: the James Webb Space Telescope, “JWST” for short. Originally proposed in the mid-1990s and a work-in-progress for well over a decade, JWST has an almost mythical status in astronomical circles. Almost every press briefing ends with a question about how JWST will contribute to any of a number of astronomical challenges—from exoplanets and star formation to the knottiest problems of cosmology and the Dark Ages.

John Mather, Nobel Prize winner and Project Scientist for JWST, described some of the rationale for building a telescope like JWST—particularly for choosing to observe the Universe in infrared light. First, the expanding universe stretches out light, so to see certain things at great distances, you need to look at longer, infrared wavelengths instead of in visible light (you can learn a bit more about that story when the Academy opens Dark Universe in Morrison Planetarium at the end of the month). Secondly, infrared light allows us to see warm things—not just hot things like stars, but planets and heated clouds of gas and dust (even you and I emit infrared light, all the time).

The telescope, Mather was quick to point out, is also big. Really big. The primary mirror will be 21 feet (6.5 meters) in diameter, in eighteen hexagonal segments that will slide into place once the telescope flies into space. To remain cool, it has “a heat shield the size of a tennis court,” as Mather put it, and it will settle into place about a million miles from home at a stable point where the Sun’s gravity and Earth’s balance.

During our stop at Goddard, we had the chance to peer into the largest clean room on the planet (see the image above), where scientific instruments and the building blocks of the satellite will, over the next two years, be assembled into the entire observatory. According to Eric Smith, JWST Deputy Program Director, 2013 was “a year of instrument integration… a lot of the science parts are already here and we are now building the spacecraft.” But the spacecraft doesn’t launch until October 2018. The intervening years will be devoted to testing, testing, testing—every component of the spacecraft, in near vacuum and at temperatures approaching absolute zero. As Mather quipped, “If you don’t test it, it won’t work.”

And Paul Geithner, JWST Deputy Project Manager, described the lengthy and painstaking process as “not a marathon so much as a concatenation of 100-yard dashes.”

All those sprints will eventually lead to Hubble’s so-called successor in space. Whether JWST can capture the romance of astronomy in people’s imaginations the way Hubble did…that’s up for debate. But it certainly promises to expand astronomy’s horizons considerably.

Ryan Wyatt is Director of Morrison Planetarium and Science Visualization at the California Academy of Sciences.
Image: NASA/Chris Gunn