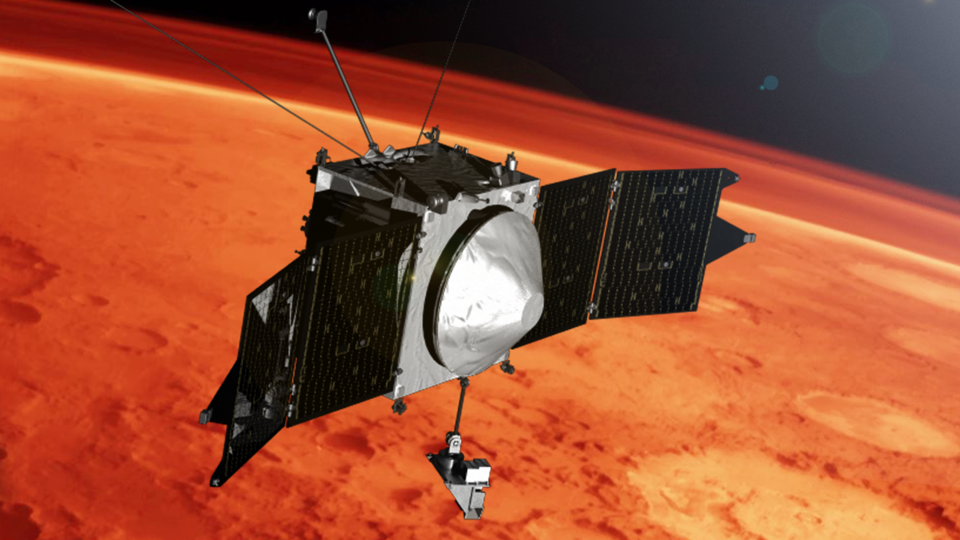 Scientists on Earth are obsessed with the history of our nearest neighbor, Mars. With rovers on its surface, we probe the martian soil for evidence of water and organic chemicals that may hold the clue to past life on the Red Planet.

Last month, researchers began to explore the upper atmosphere of Mars for more evidence of the same. NASA’s MAVEN mission seeks to understand the chemistry of the atmosphere now to shed light on the past atmosphere. How does energy flow through the system, from the Sun to the planet and back out into space? How do particles react once they hit the planet’s atmosphere and surface? And how do they escape back into space?

The MAVEN satellite launched just over a year ago and entered orbit around Mars in September. The scientific instrumentation on-board was fully calibrated and operational on November 16, and the team discussed initial findings from this first month today at the American Geophysical Union (AGU) meeting in San Francisco.

As MAVEN orbits Mars, it travels into the ionosphere—the layer of ions and electrons extending from about 75 to 300 miles above the surface. This layer serves as a kind of shield around the planet, deflecting the solar wind, an intense stream of hot, high-energy particles from the sun.

Early results show that the solar wind isn’t completely deflected, however. A stream of solar wind particles penetrate deep into Mars’ upper atmosphere and ionosphere, sinking to surprisingly low altitudes, becoming neutral (i.e., without an electrical charge). There, the particles interact with the dense atmosphere and become charged again. The reappearance of these ions, which retain characteristics of the pristine solar wind, provides a new way to track the properties of the solar wind and may make it easier to link drivers of atmospheric loss directly to activity in the upper atmosphere and ionosphere.

At the press conference today, Paul Mahaffy of NASA Goddard discussed the purpose of the mass spectrometer on MAVEN, currently measuring both the charged ions and the neutral gases, providing a big picture of the mission over the next several months. “We’re looking at gas in Mars’s upper atmosphere—what’s there, where it comes from and where it goes,” he said. The team is exploring a potential reservoir or source of gas that escaped the Red Planet forever, he continued. Understanding the history of this escape from Mars, this loss of atmosphere over billions of years, may provide more details of how the surface of Mars lost ability to sustain life, if it ever did.

“We are beginning to see the links in a chain that begins with solar-driven processes acting on gas in the upper atmosphere and leads to atmospheric loss,” said Bruce Jakosky, team leader and MAVEN principal investigator. “Over the course of the full mission, we’ll be able to fill in this picture and really understand the processes by which the atmosphere changed over time.”