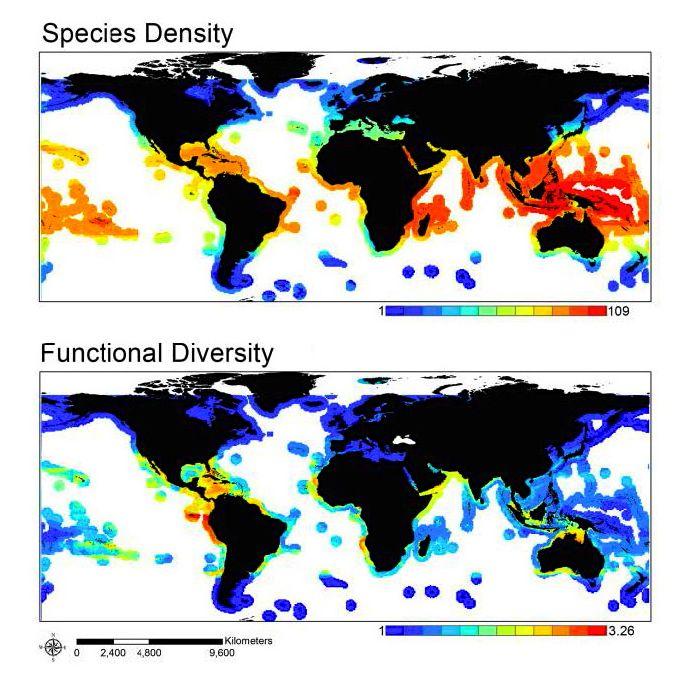 “Dissimilarity is the essence of diversity.” That’s Jon Lefcheck, of the Virginia Institute of Marine Science, talking about biodiversity.

Lefcheck and a team of international researchers recently published an article in Nature about measuring biodiversity using different methods.

Since Darwin’s day, scientists have determined biodiversity in a region by measuring species richness—basically tallying the number of different species in an ecosystem. It’s something tangible that researchers can do and provides the evidence needed to protect different diverse habitats around the globe.

But authors of the new study question whether species richness provides researchers with an accurate measure of biodiversity. “Just counting species is a really coarse way of understanding diversity,” says Lefcheck. “By gathering information on the animal’s traits—what they eat, how they move, where they live—we can understand more about how dissimilar they are.”

In “dissimilar,” Lefcheck means the difference between each species’ roles in the ecosystem. “Coral reefs have lots of species but many are doing largely the same thing, whereas temperate reefs with many fewer species tend to spread individuals out among species that are doing different things,” he explains.

“Most biodiversity censuses simply count species because it's relatively easy to do,” says Emmett Duffy, also of the Virginia Institute of Marine Science. “But to understand how species help ecosystems work, we need to know how abundant they are and what they're doing. That sounds obvious but such data are much harder to get.”

Moving beyond traditional species counts, the researchers noted how the members of each of these species make a living, using a detailed matrix of “functional traits.” These include what the fishes eat (plankton, invertebrates, algae, other fish, or a combination), how they eat it (browsing, scraping, or predation), where they live (in, on, or near the bottom or free-swimming), whether they are active at night or during the day, and how gregarious they are (solitary, paired, or schooling).

“Determining the biology and ecology of these fishes—noting what they do and how they do it—alters hotspots of diversity,” says Lefcheck. “Coral reefs remain the most species-rich habitats on earth, but a trait-based view reveals new areas where the diversity of ways in which fishes function is even higher.”

The team’s findings have important implications for planning and management. Stuart-Smith notes, “Incorporating information on functional traits into monitoring programs will add an extra dimension and greater ecological relevance to global efforts to manage and conserve marine biodiversity.”

“Loss of species in a community in which all species are doing different things may have greater consequences, since each species plays a unique role that can’t be filled by any other species,” says Lefcheck. “Investing resources in conserving the most non-redundant—and therefore vulnerable—communities may have the greatest impact.”