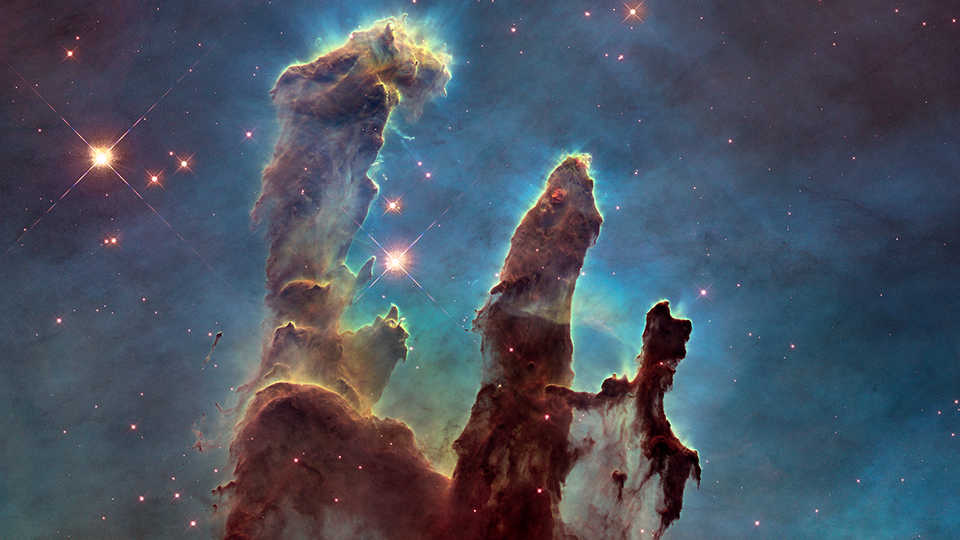 The Hubble Space Telescope turns 25 this year, and to celebrate its quarter-century of imaging the Universe, NASA is releasing numerous gorgeous pictures. At the 225th meeting of the American Astronomical Society this week, they unveiled the first release of the year.

The new picture takes Hubble back to one of its early hits, the Eagle Nebula! The famous 1995 image, dubbed the “Pillars of Creation” in the original press release, merits its own Wikipedia entry and has inspired weird artwork. (Heck, I’ve even written half an article on its aesthetic qualities.) It’s about as popular as an astronomy image gets!

The “creation” part of the moniker relates to the fact that stars are forming in the Eagle Nebula. The individual “pillars” tower about five light years in height, which means they would stretch from here to the nearest star—and a little farther. They consist of relatively cool, dense gas that remains after ionizing radiation from nearby, newly-born stars has eaten away surrounding material.

Paul Scowen, currently at Arizona State University (and formerly my graduate school officemate at Rice University), worked on the original Pillars of Creation image, and now, 20 years later, he has had a chance to revisit the Eagle nebula with Hubble’s updated technology.

“These pillars represent a very dynamic, active process,” Scowen said. “The gas is not being passively heated up and gently wafting away into space. The gaseous pillars are actually getting ionized (a process by which electrons are stripped off of atoms) and heated up by radiation from the massive stars. And then they are being eroded by the stars’ strong winds (barrage of charged particles), which are sandblasting away the tops of these pillars.”

According to Scowen, the new WFC3 image benefits from “a wider field of view with twice the resolution” of the original, using “the same exposure time but about 10 times deeper” (which means that, for the same amount of observing time, he can see features one tenth as bright). Furthermore, Hubble observed the nebula in wavelengths visible to the human eye as well as invisible infrared wavelengths (see above), which reveal not the brilliant stars “behind” the glowing gas. All these new data provides ample opportunity to understand the nebula better.

For example, one great thing about taking two astronomical images 20 years apart is that you can look for changes in the structure of the object you’re observing… So even though we might not expect a star-forming region to change much, there might nonetheless be features that will look different after two decades! Indeed, a narrow jet, resembling “a stream of water from a garden hose,“ has stretched 60 billion miles farther into space, at an impressive 450,000 miles per hour.

During the press conference, Scowen was asked if he thought the pillars still existed—if we could magically and instantaneously teleport to the Eagle Nebula, would we still see the pillars? He didn’t hesitate to answer in the affirmative… Based on the rate at which the ionizing radiation is eroding the pillars, he has estimated that they will last 10,000 years or more, and since the Eagle Nebula lies a mere 6,500 light years away, the structures still likely exist.

Now, some of Scowen’s work includes identifying where stars reside in the bright nodules that dot the higher-resolution image, and refining estimates based on the 1995 observations.

Our new view of the pillars will help astronomers construct a more detailed perspective on the star formation occurring in the Eagle Nebula. And it inaugurates a promising anniversary year for the Hubble Space Telescope.