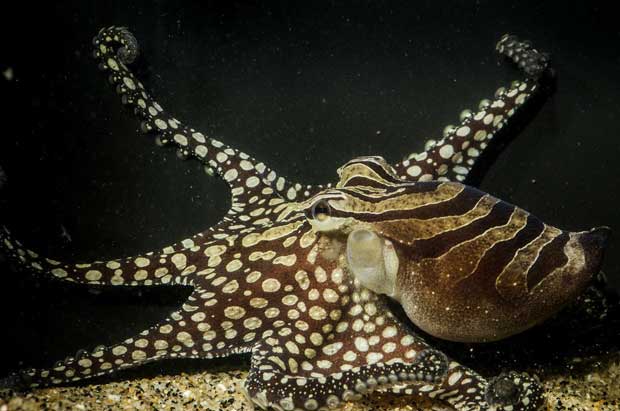 Last month, a rare octopus species—the Larger Pacific Striped Octopus—moved into the Animal Attraction exhibit at the Academy. As the news spread, Academy Senior Biologist Richard Ross had already turned his attention to the challenging work behind-the-scenes by partnering with UC Berkeley professor Roy Caldwell on a multi-year, painstaking project to describe a species so obscure that it still lacks a scientific name. And even more challenging, Ross, whose expertise and enthusiasm is focused on cephalopods and corals, is hoping to breed this species from paralarvae (as octopus hatchlings are called) to a self-sustaining octopus.

“There are no guarantees of success,” says Ross. “Raising larval marine animals is hard. The entire aquatic community faces the same hurdle—how do you feed the new hatchings and keep them alive? It’s a tough nut to crack.”

“The first food is the stumbling block,” explains Charles Delbeek, Assistant Curator for the Steinhart Aquarium. “Their mouths are so small their first food item has to be correspondingly tiny.” When using appropriate-sized substitutes for plankton, “there’s no guarantee they’ll swim the right way and attract the hatchlings attention, striking and eating. Or let’s say they do eat—does the first food item have the proper nutritional profile? Are they eating only to slowly starve to death?”

New food sources such as rotifers, copepods, baby brine shrimp,and other tiny larvae are all helping the field advance. “A lot of the advances are being made by private people in their own homes,” Ross adds.

Maybe that’s why Ross is breeding octopuses in a 4x2x2 foot, 100-gallon tank in his Alameda home. “It helps to focus on the creatures full force—just them, getting them to breed, getting them to eat. That’s how I cracked the nut of breeding Dwarf Cuttlefish.”

Ross is referring to the 2009 breeding program when the Academy made headlines as the first public aquarium to close the life cycle for Dwarf Cuttlefish (Sepia bandensis) which Ross initially accomplished in his secret home lab in 2006. In addition, Academy biologists have bred seahorses, pipefish, and jellyfish. They have also purchased tank-bred species of saltwater coral reef fish, such as clownfish, blennies, and cardinal fish.

“Our great almost-success was the ghost pipefish,” he adds, referring to brood stock from the Philippines that mated successfully at the Aquarium. “That had never been done by a public aquarium before,” says Ross, “and we kept the larvae alive for 22 days.”

Most fresh water fish and amphibians do not pose the same challenge, he notes. Academy herpetologists, for example, work closely with the aquarium on thriving killifish, frog, bug, and tadpole-breeding programs.

“He got in touch with us last January to say he found a much larger octopus than the O. chierchiae. Did we want to see it?” Ross laughs, “Oh, yes! We nearly jumped up and down at the offer.”

The Larger Pacific Striped Octopus was originally discovered in 1991 by Panamanian biologist Aradio Rodaniche, who briefly described it and published a line drawing.

“It was exciting and intriguing,” Ross recalls. “He wrote about some unusual behaviors. For example, they lay multiple clutches of eggs. But no one saw another one for more than 20 years.”

Since Ross and Caldwell switched gears to focus their study on this species, they’ve observed a number of traits that make the Larger Pacific Striped Octopus unique as well as rare. “They’re gregarious,” he says, ticking off a list, which means they can live in social groups, unlike most octopus species which are cannibalistic. "They mate beak-to-beak. They’re cooler water animals, so they should live longer. And they have stripes and spots and change color bilaterally.” Ross shakes his head happily. “It’s nuts! He exclaims. “I’ve never seen anything like them.”

The two biologists and colleagues will take approximately two years to study and describe the species. But a more immediate challenge remains finding a way to feed the new hatchlings.

For the Academy, where conservation is a central part of its mission, breeding efforts such as Ross’ will only become increasingly important.

“It’s our strategic goal to be the place to see rare and unusual animals,” adds Delbeek, the Aquarium’s assistant curator. “That said, we all recognize that in 20 to 30 years, the likelihood of being able go into the wild and scoop up animals will be much lower. So we’ve got to do a better job of breeding in-house to reach our long term goal of being self-sustaining.”

Barbara Tannenbaum is a science writer working with the Academy's Digital Engagement Studio. Her work has appeared in the New York Times, San Francisco Magazine and many other publications.