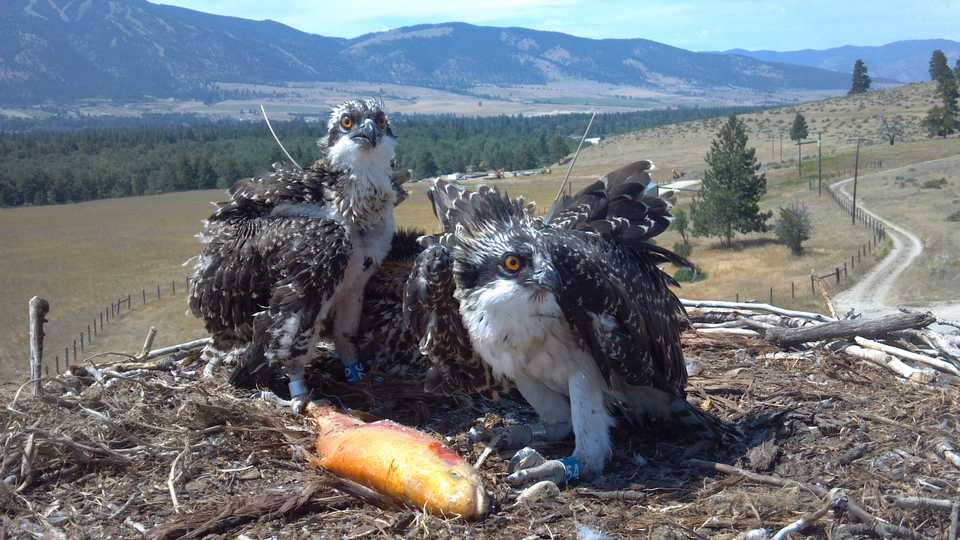 Morrison Planetarium’s new in-house production, Habitat Earth, opens next week here at the Academy. The show features ecosystems and the interconnectedness of life, including humans, with stunning visuals and a beautiful story, narrated by actress Frances McDormand. For the past several Tuesdays, Science Today has been featuring background about the new show, based on research by scientists here at the Academy and elsewhere.

One of the impressive visualizations in the production depicts the epic seasonal migrations of birds, some of the data for which came from the non-profit organization Raptor View Research Institute (RVRI), based in Missoula, Montana. Adam Shreading is a wildlife biologist at RVRI, where he organizes research projects and acts as a crew chief in the field. He and his team study the migration of golden eagles, Swainson’s hawks, and ospreys from their breeding grounds or stopovers in Montana.

“As raptors migrate south each fall,” Shreading says, “they collect along ridgelines and the edges of large bodies of water,” making them easy for birders to spot. Technology helps, too. “In the past few years new, lightweight satellite transmitters have allowed us to see exactly where many of the birds we band go throughout the year.”

Understanding these raptors’ migrations is essential to conservation efforts in the area, Shreading explains. “As widespread predators inhabiting all terrestrial ecosystems, raptors serve as valuable indicators of ecosystem health. RVRI believes that by protecting raptors and effectively managing for them, we are in turn, protecting the wild integrity of those ecosystems as a whole.”

Shreading also personally finds the raptors completely thrilling to study. “I’ve always been surprised at how daunting many of these journeys seem. In 2012, we outfitted an adult male golden eagle with a GPS transmitter and learned he spent summers in the Brooks Range of Alaska, and wintered in central Mexico. It’s amazing to me that a ten-pound animal is capable of travelling such a long distance twice a year, and is a testament to their hardiness.”

Many ospreys nest and breed at MPG Ranch near Florence, Montana, which makes these charismatic raptors especially convenient for studying. And their migration patterns are very exciting for scientists like Shreading. “The fidelity ospreys show to their breeding grounds is remarkable,” Shreading says. “Adult ospreys head south at different times, the female preceding the male. They don’t winter together; in some cases they can be thousands of miles apart. In spring, however, they both fly back to the same exact nest. Furthermore, the routes individuals take between wintering [and] summering grounds are remarkably similar from year to year, to the point of using the same power poles or trees to rest along the way as in previous years.”

Several of the ospreys’ journeys have been covered in Montana’s local media and national blogs. The journey of Osprey 54, also known as Rapunzel, has made national magazines and is even the subject of an upcoming children’s book (she is pictured above right at MPG Ranch). Rapunzel spent two years in Texas, along the Gulf Coast, and returned to the Montana-Canada border last May. “Five days later, just as Rapunzel seemed to be settling down, she embarked on a 13-day, nearly 2,000 mile-loop through Montana, Idaho, Oregon and Eastern Washington. Rapunzel made four looping journeys May 28 through July 16, returning to Alberta each time,” Shreading says. She’s back in Texas for the winter, but the team hopes to see her back in Montana this summer. “We think seeing Rapunzel raise a brood of chicks next summer would be a great development in her story!”

The osprey migrations provide great stories and essential data for the RVRI team, and act as wonderful education tool, too, as seen in Habitat Earth. “Understanding where they go, and the routes they take to get there,” Shreading emphasizes, “is very important to the conservation and management of wildlife species.”