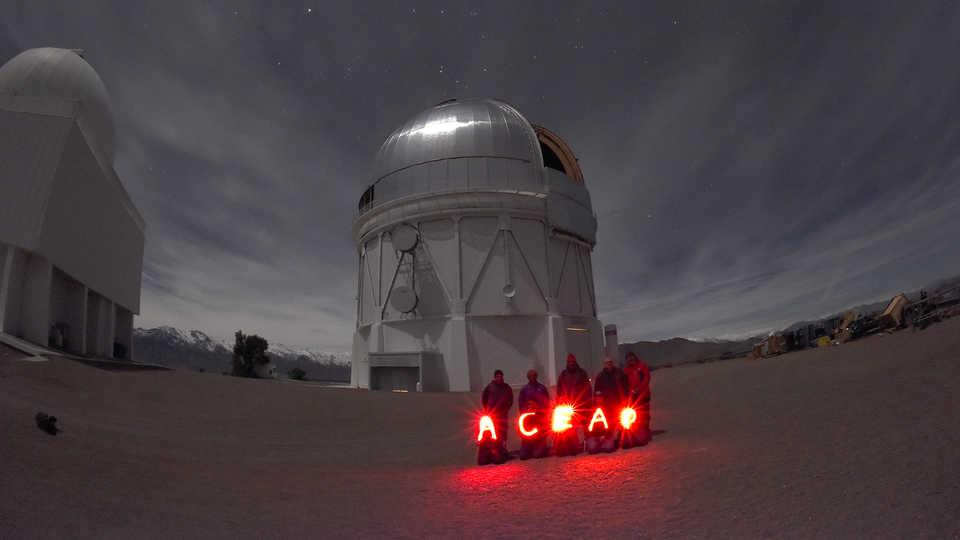 When you see a picture of the high Atacama Desert, you can appreciate its harsh beauty. The red rock against a blue sky seems otherworldly, picturesque, yet there is no comparison to actually being there, boots on the sand—similar to martian dust. It is both figuratively—and literally—breath-taking. At nearly 5,000 meters (16,000 feet) elevation, there is only about 50 percent of the air pressure at sea level, and the thin air above takes on an ultramarine hue. Without the protective swaddling of our atmosphere, things begin behaving strangely. Thin air does not fill your lungs, even slight exertion makes your head swim, the Sun’s light burns your skin immediately, and snow and ice do not melt—they merely disappear—sublimating away without becoming a liquid.

This is perhaps the least welcoming natural environment I have ever visited. I went there last spring (in the northern hemisphere, it was late autumn in Chile) with a cohort of American astronomy educators to see and explore firsthand the future of Earth-based astronomy. Chile’s Atacama Desert is something of an inverse oasis, a barren spot between the South American rainforests and the bounty of the Pacific, and yet it is the elevation and aridity that make it one of the best places in the world for telescopes. Accordingly, many of the world’s greatest telescopes have been built in Chile over the past 60 years, and more are coming—at an increasing pace. Chile has accommodated a multitude of nations, allowing them to create scientific institutions par excellence on Chile’s amazing mountains.

One of the major partners in many of these scientific endeavors is the United States. American universities and our National Radio Astronomy Observatory (NRAO) have worked hard to create a dazzling array of (um) arrays here. In order to share the wonder of this place—and promote the sizeable investment the American taxpayer has made in overseas astronomy—my cohort of astronomy educators from across the United States gathered in the Chilean capital, Santiago, to do some exploring and share the stories of this place.

The first American telescopes in Chile date back to 1849, but the inauguration of major observatories starts in 1903 when the Lick Observatory erected a 0.92-meter (36-inch) telescope on Cerro San Cristobal. The stunning results from these instruments cemented Chile’s legacy as the best site for scientific astronomical research. To date, 40 percent of all light collected for astronomy is collected in Chile, and in the next decade that number will jump to 70 percent as more and more major observatories are built here.

We had a chance to visit several sites, but two of them stand out as symbolic of these endeavors. Cerro Tololo Inter-American Observatory (CTIO) and the Atacama Large Millimeter/submillimeter Array (ALMA). Both represent international collaborations on varying scales.

CTIO is dozens of small and independent sites run by various nations or as international collaborations. Some of these observatories are remotely operated, others require an onsite staff, but all require a human hand from time to time for maintenance and care. These people share a small cluster of residences near the telescopes plus a dining hall. While the food was excellent and the accommodations nice, I must say that seeing people from around the world sharing a meal and company together was the better part of the experience. They are not the “Scientists and Engineers” so often imagined by the media—no lab coats or pocket protectors in sight. They are a diverse group of intelligent and passionate people who care deeply about what they do, but are more concerned about the dessert option or futbol score.

At CTIO’s residences, our days were very full. We were taken to the major telescopes, watched astronomers prepping for the evening’s observing, and even got to sneak into one of the control rooms to see them in action, searching for brown dwarfs. During our nights, we were able to go out and to see these supreme skies for ourselves. I have been an amateur astronomer for nearly half my life (thanks, Brian and Philip!) but I have never seen a sky like that one. It is a humbling thing to walk outside and be immediately confronted by the Milky Way.

When we left CTIO and headed to the beach town of La Serena, we were in for an immediate change. First, dropping from 8,000 feet to sea-level felt like you could chew the air, but in addition, the light pollution of the coastal city meant that the sky looked more like the orange haze of San Francisco—to which I am glumly accustomed—than the celestial vault of the night before.

La Serena was not our true destination, though. From the coast, we headed east into the actual Atacama and to San Pedro. San Pedro is a tourist town filled with great food, tchotchke shops, and supremely friendly dogs who have the run of the whole town.

Before we continued on to ALMA, we were warned by those who have been there before to refrain from trying to head toward anything on foot. Given the featureless and level nature of the desert, a landmark that seems close may in fact be quite far away. With no nearby water, high altitude disorientation and punishing ultraviolet levels, impromptu wandering is highly frowned upon.

ALMA is like nowhere else on Earth. The facility is split in two. At the low site, around 3,000 meters (10,000 feet) above sea level, the antennae are maintained, operations are conducted, and data are reviewed; this is where the site staff spend most of their time. The high site is on the Chajnantor Plain at nearly 5,000 meters (16,000 feet), where technicians and engineers come to conduct hands-on tasks, wearing oxygen masks and specialized clothing while they work. As we left the low site, oxygen bottles in hand, we were giddy (excited to be sure, but elevated blood pressure and low oxygen levels almost certainly were a factor, as well).

At first glance, the 66 antennae that make up the array seem uniform. They can all be rigged together to act as a single telescope to give a peerless look into the microwave-emitting universe or they can operate independently, each antenna a significant instrument in its own right. The greatest strength of the array is that it can be adjusted—either as a spread configuration to replicate the functionality of a 16-kilometer (nearly 10-mile) wide telescope or as many smaller subsets to allow for several lower-resolution projects to occur simultaneously.

Upon closer inspection, the antennae are not truly identical, the smaller compact formation is largely made up of smaller, stockier Japanese dishes. These 16 antennae are noticeably different but amongst the remaining 50, half come from the European Southern Observatory (ESO) and half from NRAO.

Independently, each of these ground-based space observatories might have their own autonomous, but less powerful observatory, but together, they have made one of humanity’s greatest instruments. Like the antennae themselves, nations working together create a gestalt—an observatory capable of so much more than its constituent parts. But it’s the Chilean people that truly make this collaboration possible. The indigenous Atacamanians are esteemed as the caretakers of the land and their claim to it has been carefully respected by the Chilean government and the foreign science groups. They have allowed the Chilean government to take the reigns of the land and ensure that it is properly cared for for the 50-year duration of the ALMA project.

As tough and unforgiving as the Atacama is, I found the people to be the opposite. The Chileans we met were only too happy to share their homes, their wine, and their skies with us—and perhaps with you, too, someday!