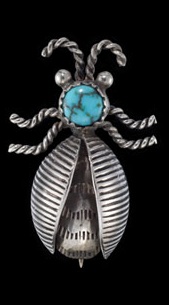 This is the first installment on the Academy’s exhibit “Evolving Traditions: Southwest Native Pottery and Silver,” located in the Upper Gallery on Level 3. The second post can be found here.

For most of us, the words “southwestern Indian jewelry” usually conjure up images of sterling silver and turquoise. But it’s not that simple. While it’s true that the two materials have dominated the work of Navajo and Pueblo jewelry makers for more than 100 years, it’s actually a relatively recent innovation among southwestern native crafts, beginning around 1870. What’s more, the craft and style is different between the native peoples in the area.

Jewelry making, itself, is an ancient craft among southwestern Indians, dating back 2,000 years or more to the region’s pre-Pueblo ancestral inhabitants.  Turquoise mined from local deposits was shaped into beads and pendants for more than a thousand years, but only during the last quarter of the 19th Century was silver introduced. Atsidi Sani was the first Navajo to learn metalworking skills, under the tutelage of a Mexican craftsman who taught him how to forge iron into horse gear, sometime in the 1850s. By 1870, he was working with silver. Eight years later, another Navajo, Atsidi Chon, set turquoise into silver.

At Zuni Pueblo in New Mexico, men learned to work iron and copper about the same time as the Navajo, in the 1850s. Around 1872, a Navajo silversmith taught a Zuni man how to work silver.  Not surprisingly, Navajo and Zuni silver jewelry looked very similar in the late 1800s and well into the early decades of the 1900s.

The Hopi Indians learned silver working from their trading partners, the Zuni, sometime in the 1890s, and by 1906 there were Hopi silversmiths in all Hopi villages. Predictably, early Hopi jewelry looked very similar to that made by the Zuni and the Navajo, and remained so until circa 1940s.

Following World War II, a number of factors combined to allow the Navajo, Zuni and Hopi to develop different styles of jewelry that would set their work apart from each other.

Navajos preferred the look of both silver and turquoise in combination with each other, so they retained a style where the silver serves as a base for stone settings. Equally popular is jewelry that does not include any stone settings at all, relying upon filed or stamped designs to accentuate the silver.

The introduction of electricity at Zuni Pueblo in the 1940s allowed for generators to power electric saws to cut ever smaller pieces of turquoise.  Previously, Zuni men and women laboriously cut turquoise pieces by hand.  The ability to cut smaller and smaller pieces allowed the Zuni to further develop their inlay techniques as well as the setting of hundreds of small stones on a single bracelet or necklace.  Unlike the Navajo, the Zuni like to accentuate the stone settings.  The silver is merely a means to support the stones.

Many Native American men served in the military during World War II, and like other veterans, they often returned home with few opportunities for employment.  In 1947, a group of Hopi veterans enrolled in a federally funded GI training program on the Hopi Reservation, taught by Hopi craftsmen, Fred Kabotie and Paul Saufkie. The students learned basics of design and how to adapt traditional Hopi motifs from pottery and textiles to silverwork.

Contemporary Native American jewelers capitalize on the traditions fostered by earlier generations, but they also work in a completely different world from their predecessors.  Many of them have degrees in art, engineering, and other subjects and have traveled internationally and been exposed to many different cultures.  Like their ancestors, these younger artists are influenced in their work by their own life experiences – people, places and events.  They combine seemingly divergent traits from one culture with those of their own, just as they fuse one type of metal to another for an entirely different effect.  In the end, however, they remain rooted in their own traditions while also forging new ones.

Russ Hartman is Senior Collections Manager of Anthropology at the California Academy of Sciences.