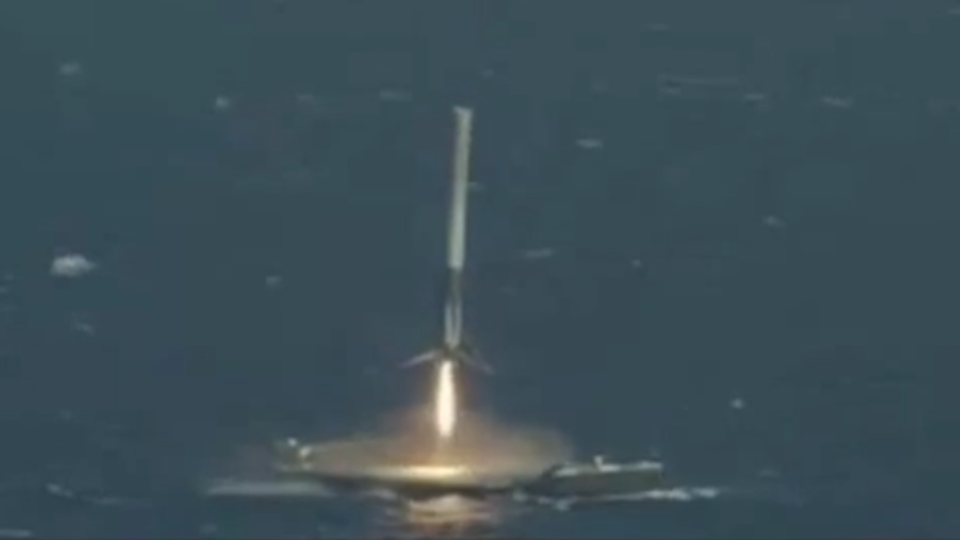 Following a frustrating string of failed attempts to land its Falcon 9 rocket booster on a seagoing landing platform, SpaceX finally succeeded on Friday, April 8, guiding the spent Falcon through 80 kilometer (50 mile) per hour winds onto the deck of the football field-size Autonomous Spaceport Drone Ship, called “Of Course I Still Love You” (OCISLY). Until today, SpaceX’s only successful rocket landing had been on land, following a launch in December. According to SpaceX CEO/CTO Elon Musk, ocean landings are necessary for high-velocity missions, which would otherwise require the first stage to halt the rocket’s downrange velocity then reverse direction to the launch site. Proving that oceanic landings are possible, the company can forge ahead with its plan to make rockets reusable, thereby lowering launch costs. (It’s better for the environment, too!)

Exciting as it was, the landing was secondary to the main mission of putting a payload into orbit, in this case a provisions-packed Dragon spacecraft, which will rendezvous with the International Space Station (ISS) after a two-day chase. Among the 3,100 kilograms (7,000 pounds) of supplies to be unpacked by the ISS crew are 20 mousetronauts—er, mice—and equipment to be used for medical research.

The payload also includes a 1,400-kilogram (3,000-pound) test article called BEAM (Bigelow Expandable Activity Module), an inflatable compartment which will be attached to a docking port and inflated to a length of 4.1 meters (13 feet) and a width of 3.23 meters (10.6 feet). Based on an original concept by NASA, the inflatable module technology was purchased and further developed by Nevada-based Bigelow Aerospace. Although not a well-known name in the space industry, Bigelow already has ten years of spaceflight experience, quietly launching two unoccupied validation modules—Genesis I and Genesis II—into orbit aboard Russian rockets in 2006 and 2007. Constructed from multiple layers of a bulletproof, Kevlar-like material, BEAM will remain attached to the space station for two years, bristling with instrumentation that will monitor temperature, air pressure, radiation, and resistance to micrometeoroid impact—all of which are factors in human survival in space. Inflatable technology is being considered as a lower-cost alternative to heavier “hard-shell” metal modules in future trips to Mars, and Bigelow’s ultimate goal is to build its own space station or habitats on the Moon or Mars out of larger inflatable modules. –Bing Quock

You may have heard of the mysterious Planet Nine…

No, not Pluto (the former ninth planet), but the as-yet-unsighted planet, ten times the mass of Earth, located 20 times farther from the Sun than Neptune (the most distant planet), recently proposed by Caltech astronomers Konstantin Batygin and Mike Brown. We described the initial result in a previous Space Friday post, and we even produced a video about it!

Batygin and Brown announced their “evidence of a real ninth planet” back in January, and since then, many astronomers have undertaken the hunt for Planet Nine. Because the predicted planet orbits the Sun once every 10,000 to 20,000 years, potentially spending much of its time too far away to be easily spotted, the search may seem rather futile, but astronomers are trying to narrow the search, increasing their odds of success.

Right on the heels of Batygin and Brown’s announcement, Agnès Fienga at the Côte d’Azur Observatory, along with colleagues from the Paris Observatory, published a research paper that examined the effect of Planet Nine on the orbit of Saturn. More specifically, the researchers examined the most sensitive measure of distances in the Solar System, radio ranging data from the Cassini spacecraft in orbit around Saturn. (Determining distances to the planets presents many challenges for astronomers, and Cassini’s radio transmissions allow for much greater precision than other methods.) They used that precision to exclude portions of Planet Nine’s orbit, basically suggesting where the planet isn’t and identifying parts of the sky where they would not expect to find it. Helpful!

(Many recent articles misrepresented this announcement, suggesting that deviations in Cassini’s orbit led to Fienga’s prediction, and NASA’s Jet Propulsion Laboratory released a disclaimer today to clarify… NASA noted that Cassini would need to collect data for another four years to make an accurate determination of a “most probable” location of Planet Nine; unfortunately, Cassini is scheduled to plummet into the ringed planet late next year. Even the esteemed Scientific American got the story wrong initially, requiring the addition of a few asterisks to sentences they changed in their announcement.)

Okay, so we’ve narrowed the region of Planet Nine’s proposed orbit where we expect to find it… But what are we looking for?

To answer that question, astrophysicists at the University of Bern used computer models to estimate Planet Nine’s size (3.7 times the diameter of Earth) and temperature (–226°C or –375°F). That sounds quite small and very cold, but in fact, the temperature is warmer than one might expect so far away from the Sun: Planet Nine’s core may still be cooling off from its heat of formation. If so, that means it will be easier to spot than a completely cold and dead planet, making the search a little bit easier.

Mike Brown served as one of the science advisors for Incoming!, the latest production now showing at the Academy’s Morrison Planetarium, and one of the show’s key scenes features a dramatic computer simulation by Batygin and Brown. –Ryan Wyatt

At one of the Academy’s Benjamin Dean Astronomy Lectures just two years ago, astronomer Jackie Faherty talked about “Going Rogue: Planets Without Parent Stars in the Galaxy.” And just this week, she and her colleagues announced the discovery of “one of the youngest and brightest free-floating, planet-like objects” relatively close to home—only about 95 light years away!

The lovingly named 2MASS J1119–1137 could be easily confused for a variety of different kinds of astronomical objects, and it took significant sleuthing to narrow down its characteristics. But after pinpointing it as part of the TW Hydrae association (not an elite astronomical club but rather a cluster of very young stars), the astronomers knew they were looking at a very young object (a mere 10 million years old) about eight to ten times the mass of Jupiter (the largest planet in our solar system). Unlike Jupiter, however, J1119–1137 isn’t orbiting a star—it’s wandering space all by its lonesome. A rogue planet.

I had the great pleasure of accompanying Faherty on one of her observing runs three years ago, and I described her search for small nearby objects in a series of three Science Today articles: A Night at the Observatory, Why Y Dwarfs?, and One Night of Many. We look forward to many more discoveries from Faherty and her colleagues! –Ryan Wyatt

In February we told you about the LIGO experiment’s direct detection of gravitational waves. This is an extension of Einstein’s idea that gravity is the result of massive objects warping space and time. If you have two massive objects interacting or one massive object moving, you’re going to cause waves that ripple through the fabric of the Universe. LIGO looked for some of the most energetic events—black holes and neutron stars spiralling toward one another and colliding in an enormous explosion—because such events cause a huge, but brief flash of energy that can then be detected on Earth by measuring how space is squeezed or stretched over fairly large distances of a few miles.

Here’s the thing, though: there are lots of things that cause gravitational waves—so many things that their gravitational radiation (another name for all those waves) get jumbled together, making it hard to focus on one particular event. Take galaxies, for instance. Thanks to dark matter, galaxies tend to clump into groups or clusters that are relatively dense, leading to frequent collisions and mergers. This is how galaxies evolve: they crash into each other and become bigger, stronger galaxies. Given the staggering number of galaxies in the Universe, current models suggest mergers should happen basically all the time in basically every direction. Thus, we should be getting gravitational waves from everywhere always.

So we have a new “background” to look for, like the Cosmic Microwave Background, often discussed in cosmology, or the Cosmic Infrared Background, which we discussed a few weeks ago. The Stochastic Gravitational Wave Background, as it’s called, is a bit counterintuitive. Current models suggest that every or nearly-every galaxy has a supermassive black hole at its center—for example, the one at the center of the Milky Way is four million times the mass of our sun (pretty hefty compared to the ones that LIGO saw, which were tens of solar masses). But these collisions also take much longer, and the energy is not released as quickly. Whereas LIGO is looking for gravitational waves whose period (the time between successive peaks) is less than 1/100th of a second, the North American Nanohertz Observatory for Gravitational Waves (NANOGrav) is looking for waves whose period is over a year.

Light-year long waves. A wave whose length is 9.5 trillion kilometers (six trillion miles). The mind boggles. How do you even begin to look for something like that? The LIGO detectors were four kilometers long in two directions. NANOGrav’s are… bigger.

The researchers study data from pulsars, the incredibly fast-spinning cores of dead giant stars whose light flickers towards us dozens or hundreds of times every second. By studying the way that light changes over time and comparing the pulsars’ lights to each other, the scientists can use the Universe itself as their gravitational wave detector. They use two of the world’s largest and most sensitive radio telescopes, the Green Bank telescope in West Virginia and the Arecibo Observatory in Puerto Rico. For nine years, 60 researchers from over a dozen institutions across the U.S. and Canada have studied the light of 54 pulsars, and they have yet to find any of these gravitational wave signatures.

Believe it or not, that’s good news. We’ve been using our understanding of how galaxies merge and supermassive black holes collide to inform the search, and based on what we know, we should have found something by now. The fact that we haven’t means something in our models is likely incorrect. Maybe galaxy mergers aren’t as common as we thought. Maybe they happen too slowly to make the types of waves we could detect. NANOGrav is ruling out hypotheses and models that don’t fit their observations, bringing us closer to understanding how galaxies change over time, which could have far-reaching ramifications across the field of astronomy. In addition, knowing where gravitational waves will not be found informs the search and narrows the field of study, allowing future researchers to focus on more promising leads.

It may seem strange that such an enormous project with such lofty goals could call not locating their quarry a success, but that’s how science works. It’s a long, arduous process that involves knowing what you’re looking for, knowing where to look for it, ruling out other possibilities, and seeing what you can learn about everything else along the way. We haven’t yet located the Stochastic Gravitational Wave Background, but we’ve learned something new about galaxies, and that’s a big step forward. And it brings us closer to the day when we do locate these background waves, allowing us to account for them when studying the gravitational waves of, well, nearly everything else.

LIGO showed us that gravitational wave astronomy is a viable field with much to teach us. NANOGrav is hot on their heels, seeking to open up an whole new field and a whole new way of exploring the cosmos. –Colin Elliott