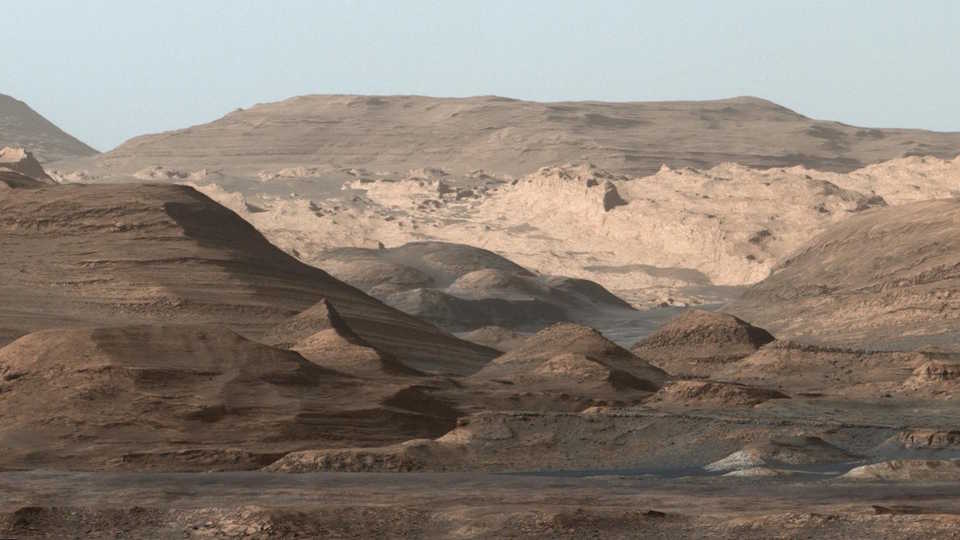 The Moon may not have an atmosphere like Earth, but it does have an exosphere very close to its surface. And it’s not the only world with one. Earth has an exosphere as its uppermost layer of atmosphere, but surface-bound exospheres may be the most common type of atmosphere in the Solar System, NASA’s Richard Elphic said at the American Geophysical Union (AGU) meeting in San Francisco this week. Mercury, Pluto, the asteroid Itokawa, and moons Phobos, Rhea, Europa, and Io, plus other neighboring bodies have this feature. That’s one of the reasons NASA launched the Lunar Atmosphere and Dust Environment Explorer (LADEE) spacecraft in 2013—to understand exospheres on the Moon and potentially those just beyond our reach.

“These observations enable us to constrain the physical processes that contribute to the lunar exosphere,” according to Menelaous Sarantos, also from NASA. “We’re using these findings to build new exosphere models of how the space environment interacts with surfaces of airless bodies, which we can use to better predict the processes and behaviors around similar bodies.”

Interactions between the lunar surface and cosmic events (such as the solar wind) affect the exosphere, with minerals absorbed onto or ejected from the surface of the Moon. One phenomenon LADEE studied in 2013, with results published this week in Science, is the effect of meteoroid strikes. Meteoroid impacts from the Geminids in December of that year resulted in increased potassium and sodium levels in the lunar exosphere. Scientists will incorporate these findings to help unravel how our solar system originated and changed over time. –Molly Michelson

As the Curiosity rover begins to climb Mount Sharp on Mars, it’s finding something interesting when it drills into the martian soil: high levels of silica, not previously detected at other drill sites.

“These high-silica compositions are a puzzle. You can boost the concentration of silica either by leaching away other ingredients while leaving the silica behind, or by bringing in silica from somewhere else,” said Albert Yen, from NASA’s Jet Propulsion Laboratory. “Either of those processes involve water. If we can determine which happened, we'll learn more about other conditions in those ancient wet environments.” Acidic water would tend to carry other ingredients away and leave silica behind. Alkaline or neutral water could bring in dissolved silica that would be deposited from the solution.

Another interesting find was silica-related tridymite. At the drill site Buckskin, the CheMin instrument on Curiosity found high levels of tridymite, which had never been seen before on the Red Planet (and is quite rare here on Earth). Here it’s associated with volcanic activity, but that doesn’t seem to be the case at this site on Mars. Rather, it appears to have been deposited in a tranquil environment like a lake, potentially forming elsewhere and transported by water. Or perhaps it was created through a different process altogether, said NASA’s Liz Rampe. “We’re actively pursuing ways to created tridymite at lower temperatures in the lab to see if there are other processes [than volcanoes] that create the mineral,” she said at an AGU press conference Thursday.

The presence of these minerals can tell a lot about Mars’ past, too. Silica is one determinant of the potential presence of organic materials and habitability in the planet’s history, Yen explained. Curiosity project scientist Ashwin Vasavada, agreed. “What we're seeing on Mount Sharp is dramatically different from what we saw in the first two years of the mission,” he said. “There’s so much variability within relatively short distances. The silica is one indicator of how the chemistry changed. It’s such a multifaceted and curious discovery, we’re going to take a while figuring it out.” –Molly Michelson

The World Next Door

It seems like we can’t even go a month without some amazing new exoplanet discovery.

Mostly this is because studying extrasolar planets (planets around distant stars) is so new; the first one was only found in 1995, and it’s still making headlines. To date, there are over 2,000 known exoplanets, with thousands more detected and awaiting confirmation. The Kepler spacecraft, which operated as an exoplanet detector between 2009 and 2013, has about a 90% success rate at discovering these strange new worlds.

In April 2014, the Kepler team announced Kepler 186f, a planet larger than our own (a “super-Earth”) in the habitable zone (a region around a star where temperatures are right for liquid water) of a red dwarf star (a type of star that is smaller and cooler than the Sun). At the time, it was one of the most Earth-like planets we had ever found, which changed this summer with the discovery of Kepler 452b, which bumped Kepler 186f down on that list.

Both of these planets, though, are far, far away—186f lies almost 500 light years away, and 452b is over 1,400 light years distant. So even if there life exists on one of these worlds, we wouldn’t be able to contact them without the conversation taking millenia!

But now, a team from the University of New South Wales, working out of the La Silla Observatory in Chile, have discovered three new exoplanets just 14 light years away. Wolf 1061 is a red dwarf star with three super-Earths, one of which sits comfortably in the habitable zone. However, for a star this small and cool, that habitable zone is also much smaller, so the planet within it, Wolf 1061c, orbits its star in only 18 days. The others are pretty close, too, at a five day orbit for the inner planet and a 67 day orbit for the outer world.

The scientists hope that because the planets’orbital periods are so short, they’ll pass in front of their star from our perspective, allowing us to glimpse the light coming through the atmosphere—and to figure out if there’s water or breathable air. With luck, we could be looking at a planet very close to us in space that could be conducive to life as we know it. If not, we’ll have to content ourselves with studying Gliese 667c, which is only 22 light years away.

Either way, small, rocky worlds are turning out to be pretty common. The search for another Earth continues! –Colin Elliott

In 2006, the International Astronomical Union (IAU) stirred up a hornet’s nest by reclassifying objects in our solar system, changing Pluto’s status in the process from “planet” to “dwarf planet.” At the time, the criteria used to establish planethood included an orbit around the Sun—our sun, and no other. For the time being, small, non-stellar objects orbiting other stars that had been discovered since 1994 were left hanging. Nonetheless, they were referred to as extrasolar planets (or “exoplanets”), and eventually, as more were discovered, the system of designating them with the genitive form of the star’s name followed by “b,” “c,” “d,” and so forth (the star itself being “a”) became ungainly and, in many cases, tongue-twisting.

As of this writing, 2038 bodies have been confirmed orbiting 1291 stars, with 503 of those stars possessing systems of multiple objects. Recently, the IAU approved names for 31 confirmed exoplanets. All of these objects were discovered before 2008, with the assumption that although their exact nature and environmental conditions are still not well-determined, at least five years of repeated observation should be sufficient for astronomers to determine whether or not they actually exist. The host stars of most of these planets were also up for naming, although five of them—including Pollux in Gemini the Twins and Fomalhaut in Piscis Austrinus the Southern Fish—already have long-held traditional names and were ineligible. But 42 Draconis, a star in the constellation Draco the Dragon, is now named Fafnir, for the dwarf from Norse mythology who could turn himself—appropriately enough—into a dragon.

Names were proposed by astronomical interest groups from around the world and were voted upon at the IAU’s “NameExoWorlds” website by more than a half-million people. The list of approved names falls along the lines of historical, scientific, literary, and mythological figures, some relating in one way or another to the constellation in which the stars and planets are found… But there are exceptions. For example, the star 55 Cancri in Cancer the Crab is now Copernicus, after the Polish astronomer who proposed the heliocentric (or Sun-centered) model of the solar system. Its five known planets are dubbed Galileo, Brahe, Lippershey, Janssen, and Harriot, after other astronomers. The star Mu Arae in Ara the Altar is now Cervantes, after the author of “Don Quixote,” and its four known planets are named after characters from that novel—Quijote,Dulcinea, Rocinante, and Sancho.

The adoption of names does nothing to increase our knowledge of these exoplanets, but arguably, they may increase the public’s awareness of them, with names that make these distant, mysterious bodies more-relatable and perhaps at least sounding not so far, far away. –Bing Quock