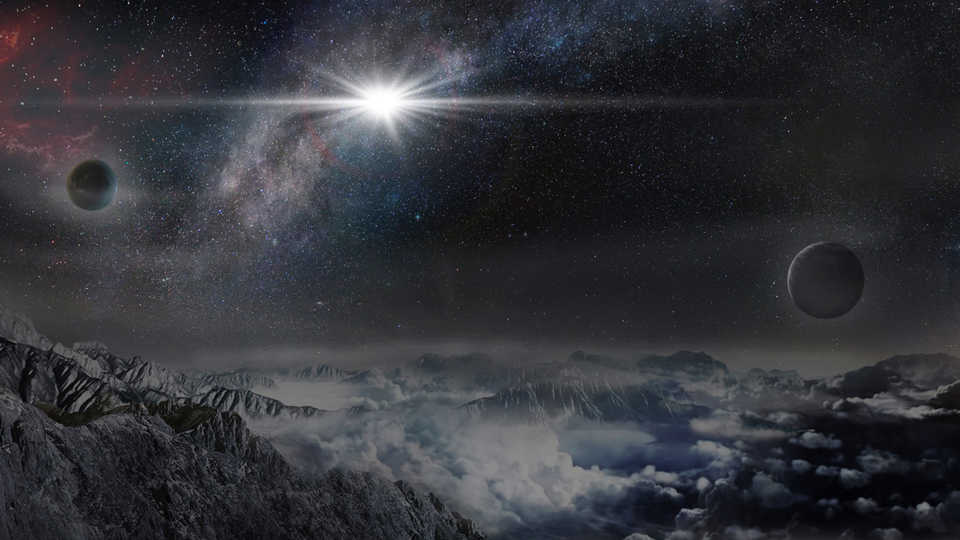 Weather permitting, from late January through the first week of February, early-risers will have an opportunity to see five of our solar system’s planets and the Moon in the sky at the same time—a rare sight that won’t be seen again in the predawn sky until 2022. Only five of the Sun’s eight worlds can be seen in the sky without optical aid, the most distant (Uranus and Neptune, as you remember from grade school) too far away to see without telescopes, and Earth, of course, being the world we are standing on. That leaves Mercury, Venus, Mars, Jupiter and Saturn, which will be seen strung in a long arc from the southeast to the west, with only Saturn appearing out of order in between Venus and Mars. This line approximates the apparent path the Sun would follow against the stars, if you could see the Sun and the stars at the same time. It also defines the plane of the Solar System, as viewed from our terrestrial vantage point.

Even now, four of the planets can be seen shining brightly in the predawn sky, with elusive Mercury and the Moon joining the party near the end of the month. Mercury starts peeking out of the morning twilight just as the waning gibbous Moon approaches Jupiter from the west on the 26th. Several bright stars are also found along the same line, as if saying, “me, too!” You can find them by following the Moon, which is near Regulus in Leo the Lion on the morning of the 26th and near Spica in Virgo the Maiden on the 30th. Between these stellar encounters, the Moon passes near Jupiter on the morning of the 27th, the Red Planet Mars on February 1, Saturn on February 3, Venus on February 5, and Mercury on the 6th.

If you have access to a telescope (or a friend who does), don’t miss this opportunity to observe the unique features of five planets and the Moon at a single sitting, including the moons of Jupiter, the rings of Saturn, the reddish-orange disk of Mars, the craters of our Moon, and the phases of Venus and Mercury—your next chance will be in six years! –Bing Quock

In the search for exoplanets, planets orbiting stars other than the Sun, we’ve detected worlds in surprising places, but so far we have only found a single exoplanet in a particular celestial environment—globular clusters.

Globular clusters are dense, spherical collections of hundreds of thousands to millions of stars tightly bound together by gravity. They tend to contain ancient stars, forming on average about 10 billion years ago. The Milky Way galaxy includes about 150 globular clusters, mostly in the galactic outskirts. But the gravitational mosh pit of a globular cluster likely strips large planetary systems from their parent stars, and from our current surveys, they seem to be nearly devoid of exoplanets (although, to be honest, we haven’t looked that hard).

There’s more to the story, according to Rosanne DiStefano of the Harvard-Smithsonian Center for Astrophysics. In her presentation at the American Astronomical Society (AAS) meeting earlier this month, she noted that “it’s premature to say there are no planets in globular clusters.” New models calculated by her team suggest that, even in the dense heart of a globular cluster, planets can reside in stable orbits within habitable zones around stars much, much smaller than our sun (stars a bit larger seem to be able to hold onto planets in the less dense outer reaches of a globular cluster).

Moreover, habitable zone planets in globular clusters may have a big advantage when it comes to the odds of life developing on them—the relative stability of their environment. The long age of the clusters means the planets within them would no longer be disrupted by life-destroying stellar explosions such as supernovae and gamma-ray bursts. Additionally, a planet around a low-mass, long-lived star would give life a longer timeline (many billions of years compared to say, a few million around a big, short lived star), and therefore a better chance of not only coming into existence, but also then becoming complex enough to evolve intelligence or even develop space travel.

Taking it a step further, if these clusters end up being a good place to nurture not only life, but intelligent civilizations, the proximity of stars to each other could be advantageous to establishing interstellar communities.

“We call it the globular cluster opportunity. Sending a broadcast between the stars wouldn’t take any longer than a letter from the U.S. to Europe in the 18th Century,” says DiStefano. “Interstellar travel would take less time too. The Voyager probes are 100 billion miles from Earth, or one-tenth as far as it would take to reach the closest star if we lived in a globular cluster. That means sending an interstellar probe is something a civilization at our technological level could do in a globular cluster.” –Elise Ricard

As noted above, nearby supernovae can cause problems for life on a planet. How? Well, when a single star outshines its entire galaxy, it blasts a lot of radiation into space. Planets too close by could basically get, well, not fried, per se, but irradiated with enough high-energy gamma rays to cause changes in atmospheric chemistry that would make life very, very uncomfortable. (Some astronomers have suggested such an event actually caused an extinction on Earth, although that’s wide open for debate.)

Luckily, most supernovae are very far away. Very, very, very far away. Like, far enough away for us to measure the accelerating expansion of the Universe. The nearest supernova observed in the last century resides in the Large Magellanic Cloud, about 168,000 light years away.

In the past week, astronomers announced the brightest (and therefore most powerful) supernova yet observed. The numbers are mind-boggling… 570 billion times as bright as the the Sun! Between 20 and 50 times as bright as our entire home galaxy (I described the hugeness of the Milky Way in last Friday’s Science Today article for comparison)! 200 times brighter than the average supernova!

Cataloged as ASAS-SN-15lh, the “superluminous supernova” (what astronomers lack in naming conventions, they make up for in superlatives) lies relatively nearby—a mere 3.8 billion light years away. And yeah, that’s billion with a “b.”

Another statistic: in four months, the supernova released as much energy as the Sun, at its current brightness, would output in 90 billion years. What can power such a blast? We don’t know. Even a magnetar’s energy output falls short of these estimates. “If it really is a magnetar, it’s as if nature took everything we know about magnetars and turned it up to 11,” said Krzysztof Stanek of Ohio State University, referencing a scene from the movie This Is Spinal Tap.

The menacing moniker comes from the survey that located the supernova, the All Sky Automated Survey for SuperNovae (ASAS-SN), which has discovered about 250 supernovae since it started a couple years ago. More to come, one can only expect.

Gotta feel sorry for any alien life living too close to ASAS-SN-15lh. That was a pretty bad day, 3.8 billion years ago… –Ryan Wyatt

And a Black Hole Runner-Up

As I mentioned when covering stories from the AAS meeting last week, our home Milky Way Galaxy harbors a supermassive black hole at its center. Today’s announcement from the National Astronomical Observatory of Japan (NAOJ) suggests that it might have a, well, less-supermassive companion…

Astronomers have discovered a mixed-up interstellar cloud (with another phone-number-like name, CO-0.40-0.22), with the gas basically moving around every which way. It takes a lot of energy to drive this kind of activity, so where is it coming from? A supernova could actually explain something like this, but since we see no excess infrared or X-ray emission from CO-0.40-0.22, a supernova seems out of the picture. Perhaps a black hole’s gravity could supply the energy?

Zooming into the cloud with a high-resolution 45-meter (150-foot) radio telescope, the team of astronomers discovered that the gas cloud has a compact core where most of the activity seems to be occurring. The team then used a simple computer model to simulate the gravitational effects of a massive object inside the cloud: they tried out different masses (quantities of stuff) with different spatial distributions (compact blobs versus more diffuse clouds). The best fit to the observations? An object with a mass 100,000 times that of the Sun inside a region only 0.3 light years in radius—yep, a black hole!

But not your typical black hole. We observe evidence for two main categories of black holes: the aforementioned supermassive kind (with a mass greater than a million times that of the Sun) and the stellar mass variety (with a mass less than 100 times that of the Sun). You’ll notice that the predicted mass of this proposed CO-0.40-0.22 black hole lies inside this intermediate zone, between 100 and one million times the mass of the Sun. Unsurprisingly, astronomers call these rare objects intermediate-mass black holes, and only a few have been spotted.

If confirmed, the new discovery would be the largest black hole yet discovered in this regime. And it represents a significant building block from which a supermassive black hole could form, which means it is indeed, as the NAOJ press release claims, a “possible missing link in black hole evolution.” –Ryan Wyatt