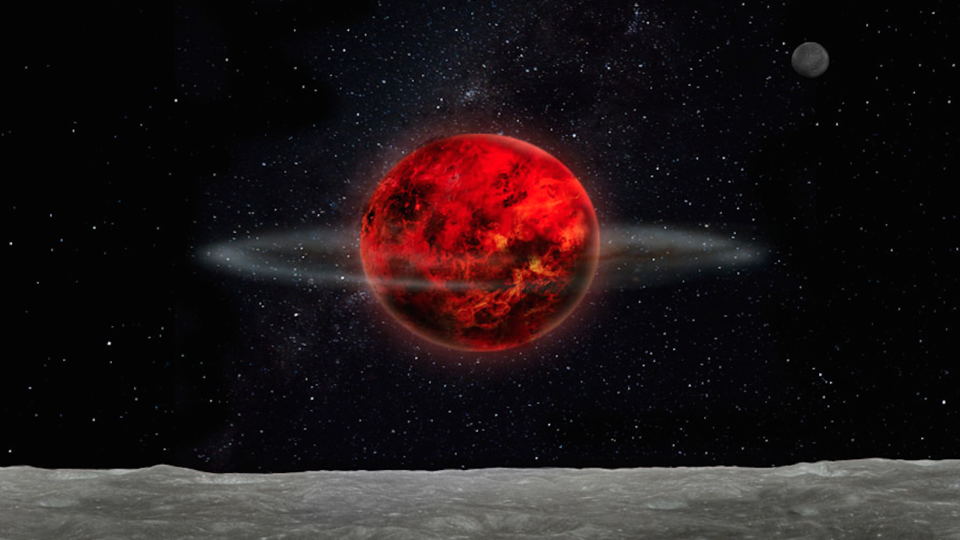 Gold and the Moon’s Tilt

About 4.5 billion years ago a small planet collided with Earth and the resulting debris eventually formed our moon. At least that’s how the current, favored theory goes. But a solid hypothesis explains all the details, and one detail needs explaining… How did the Moon get its approximately five-degree tilt? The theory’s impact process predicts that the Moon would now have an inclination value about ten times smaller than its true value.

A paper, published this week in Nature, attempts to solve this long-standing “lunar inclination problem.” What if other small planets passed by a few tens of millions of years after the Moon’s formation? Without colliding with our satellite, their gravity would still influence the tilt of the Moon, according to the authors’ simulations.

In an accompanying News & Views article, Robin Canup proposes that these same small planets could have impacted Earth and deposited the rare metals iridium, platinum, and gold on our planet. “The proportions of those metals are unusually high in Earth’s crust,” according to an article in Science. This new paper offers a very tidy solution wrapped with a neat bow (tilted just five degrees). –Molly Michelson

Lose a Moon, Gain a Ring

A few weeks ago, we reported that one of Mars’s two moons, Phobos, is slowly being pulled in toward the Red Planet and will eventually (in 20–40 million years, give or take) be torn apart by tidal forces. Another paper published last week in Nature Geoscience studied the cohesiveness of Phobos and concluded that the remains of the moon would form a ring around the planet.

“If the moon broke apart at 1.2 Mars radii, about 680 kilometers (420 miles) above the surface, it would form a really narrow ring comparable in density to that of one of Saturn's most massive rings,” said Tushar Mittal who co-authored the paper with Benjamin Black, both of UC Berkeley. “Over time it would spread out and get wider, reaching the top of the martian atmosphere in a few million years, when it would start losing material because stuff would keep raining down on Mars.”

The team was unclear on whether the rings would be easily visible from Earth, since they would be composed of mostly dark rock rather than reflective ice, like those of Saturn

But don’t add Mars to the list of Solar System worlds with rings (along with Jupiter, Saturn, Uranus, and Neptune) quite yet—the process of ring formation would take about 10–20 million years! Once formed, however, the ring would be expected to last about 100 million years. –Elise Ricard

Following up on another previous post… Elise Ricard reported here in October that Kepler observed hundreds of non-periodic brightness dips from the star KIC 8462852 that went as deep as 15 to 22 percent of the star’s light. These are unlike planet-transiting dips—too bright and irregular—and they don’t correspond to another star, either. Theories abounded as to the cause, including analien megastructure (SETI even fine-tuned its searches for alien technology), but as of last week, one theory seems to stand out: a barrage of crumbling comets passing in front of the star.

Using data taken with the Infrared Array Camera in NASA’s Spitzer Space Telescope, a team of researchers concludes that comet fragments coming in rapidly at a steep, elliptical orbit could create a big debris cloud that would dim the star. The cloud would then move off, restoring the star's brightness and leaving no trace of excess infrared light.

The research is published in The Astrophysical Journal Letters. And the search will have to continue elsewhere for science-fiction structures around distant stars. –Molly Michelson