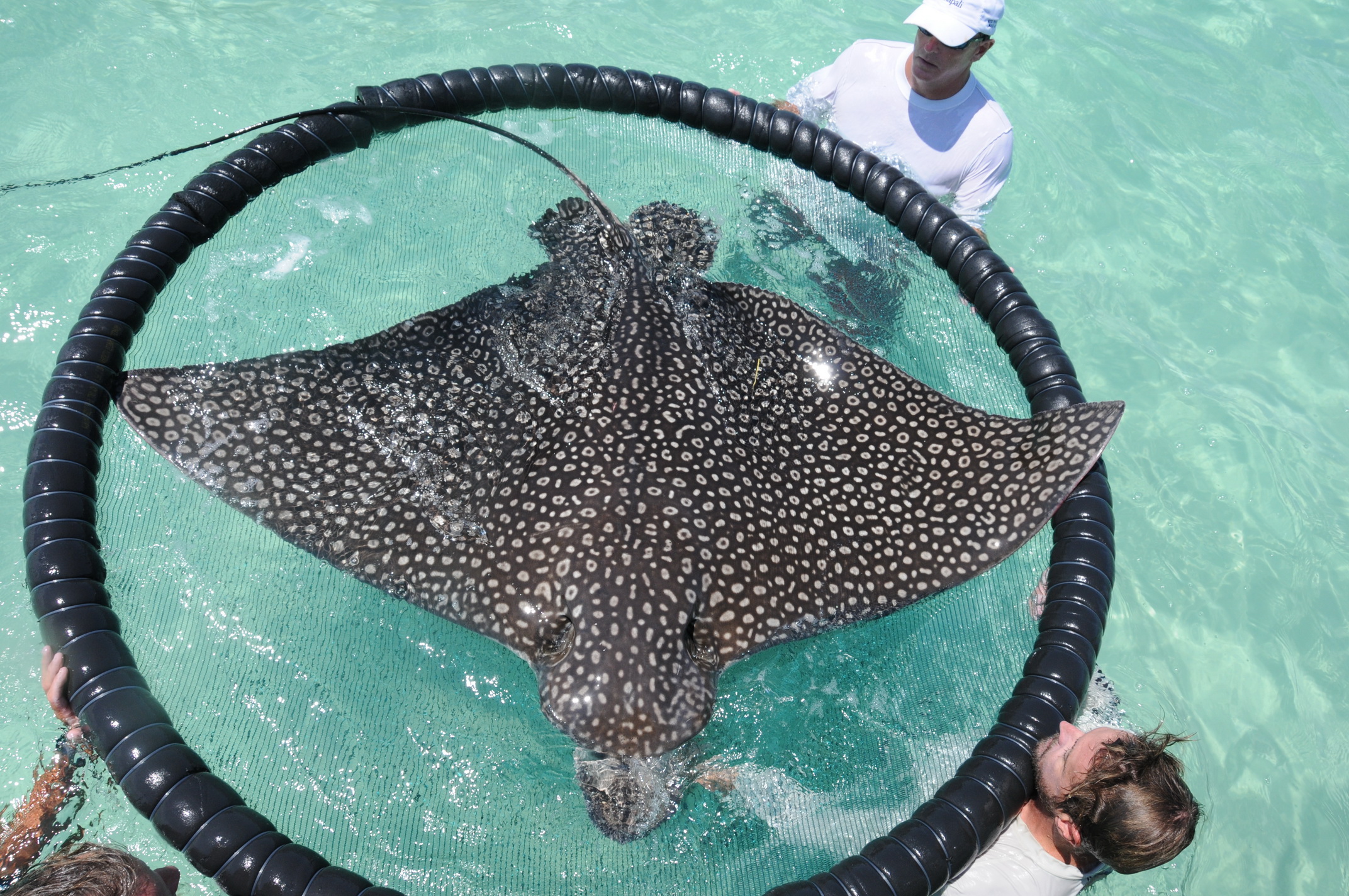 Two years ago, we produced a video about the remarkable work that scientists at Mote Marine Laboratory and the Academy are doing on spotted eagle rays. Little is known about these stunning elasmobranchs, but Kim Bassos-Hull of Mote and Anna Sellas from the Academy are continuing their studies to discover more about the rays and perhaps protect them along the way.

Bassos-Hull recently came to the Academy, and she and Sellas took the time to give Science Today an update on their long-term project.

Satellite Tagging & Genetics
They were excited about a satellite tag (a location-only SPOT tag) they deployed on a ray in April. Unlike sharks and marine mammals, rays are hard to tag because they have no prominent fins. The scientists’ colleague, Matt Ajemian of the Harte Research Institute, has had some luck with tagging rays, and he visited Mote to work with Bob Hueter, Mote’s expert on tagging sharks, to give the team some tips and best practices.

Generally, Ajemian has had satellite tags stay on animals for up to a few months, though the batteries last up to six months. Ajemian recently presented these findings at a special symposium on stingrays hosted by the American Elasmobrach Society in Albuquerque, New Mexico. Bassos-Hull says that the tag isn’t too invasive to the ray and that “many of the rays carry remoras larger than these tags.”

The first tag from April was unsuccessful, but in late May, Hueter and the team put a six-month pop-up archival satellite tag on a large female eagle ray.  If all goes well, this tag will pop off as programmed in about six months and give scientists more data on these mysterious rays.

Sellas is hoping the tag reveals information on the spotted eagle rays’ movements. The rays are generally found near Mote, off the coast of Sarasota in the Gulf of Mexico, from March through November. Few of the rays are seen in the summer months, and hardly any in the winter. Spotted eagle rays are also found on the Atlantic side of Florida, as well as off the coasts of Mexico and Cuba, but these rays could come from the same or different populations.

Sellas’ genetic work has revealed little genetic difference between rays found off Mexico and those found off Cuba, suggesting they are likely from the same population. Greater genetic differences seem to exist between rays sampled off Sarasota and those sampled off Mexico, suggesting limited movement across the Gulf. The satellite tagging data could confirm this “weak, but significant, genetic structure,” as Sellas calls it.

Sellas also hopes these tags can reveal how deep the rays are swimming and which habitats they frequent. Bassos-Hull says that habitat usage is particularly important off Sarasota, where there is proposed sand dredging in the Big Sarasota Pass Inlet for beach renourishment. But the Mote team knows the rays use this area to feed and that additional data could help protect this habitat for the rays.

Gulf Oil Spill
Since the Gulf Oil Spill, the Mote team has observed the number of spotted eagle rays off their coast decreased by about half. They began measuring and documenting the rays in 2009 and 2010, but in 2011 and 2012 the numbers per unit of measure had decreased. And, while the season isn’t finished this year, the lower population trend seems to have continued into 2013.

In addition, the Mote team has observed species rarely seen in the area—devil rays and whale sharks have started appearing in higher numbers than previously recorded. “It might be that these fish moved away from where the oil contaminated water was,” says Sellas.

Overseas collaborations
Bassos-Hull and Sellas have been working with Mexican scientists to collect tissues of spotted eagle rays for genetic sampling. Unlike the Florida samples, these tissues don't come from live animals, but rather dead rays sold at local fish markets for consumption. One of their Mexican colleagues, Juan Carlos Perez-Jimenez, visited Mote in May to update them on the catch rates of spotted eagle rays in their fisheries.

Sellas and Bassos-Hull are also excited that this type of collaboration has expanded to Cuba.  A colleague there has similarly collected market samples for Sellas to conduct genetic work on here at the Academy.

Citizen Scientists on the Job
In the meantime, Bassos-Hull has received funding to utilize citizen scientists to learn more about these rays off the Florida Keys. She’s distributed small cards to dive shops there that, like the back of a milk carton, show a picture of one of these beautiful rays and ask, “Have you seen me?” Citizens can then refer to the back of the card which directs them to a website where they can report their sightings.

Mote is hoping that divers might spot these rays and input their sightings into the database, including pictures and location information. The small cards also give divers clues about where on the rays they might find small “spaghetti tags.” These tags indicate whether the ray has been caught before by Mote.

Bassos-Hull says that these citizen scientist sightings can help researchers understand where the hot spots for spotted eagle rays are in the Keys and where researchers should direct their attention for future studies.

Recognition and Recaptures
If you remember the video we produced in 2011, one of the most astonishing aspects of Mote’s work with these rays is the spot recognition software they use to identify the rays. The program, called I3S, is based on star recognition software and allows the researchers to recognize rays they’ve previously captured and released. Like fingerprints, no two rays’ spot patterns are the same.

Based on the data Mote has collected over the past few years, approximately 5% of the rays sampled are recaptures. This suggests that a certain number of rays are either remaining in the same area or returning to that area over time.

Busy Summer
Bassos-Hull and Sellas still have a lot of work ahead of them to understand these charismatic creatures and to share that knowledge with the world. In the meantime, this summer has kept them busy with a recent presentation at a professional conference on stingrays and forthcoming publications on their findings. And with more seasonal captures, they’ll undoubtedly learn more about the rays and their habitats. “We’re documenting the flux of nature,” Bassos-Hull says.

That could take a while.

Bob Hueter of Mote is also a principal investigator on this project. The researchers receive support and funding from the National Aquarium, the Disney Worldwide Conservation Foundation, the PADI Foundation, the Save Our Seas Foundation, and the California Academy of Sciences.