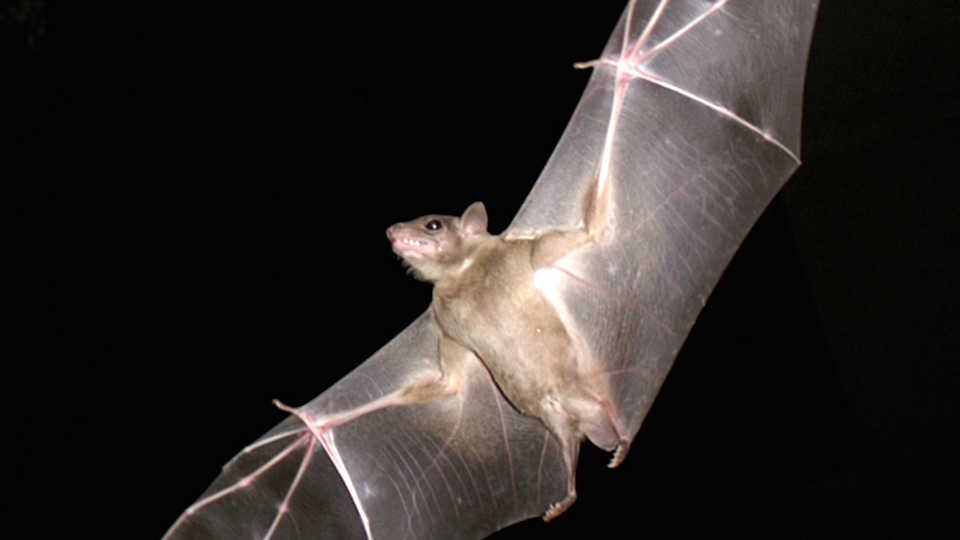 Bats are an anomaly. They are flying mammals. They roost upside down. And compared to birds and insects, bats have incredibly heavy wings for their body size. But these anomalies are neither detrimental nor accidental. According to a new paper in PLoS Biology that references a line from the movie Toy Storyin its title (“Falling with Style: Bats Perform Complex Aerial Rotations by Adjusting Wing Inertia”), they all result from—you guessed it—evolution.

It has to do with that upside-down roosting position—they need to land that way. “Bats land in a unique way,” says one of the study’s authors, Sharon Swartz, of Brown University. “They have to go from flying with their heads forward to executing an acrobatic maneuver that puts them head down and feet up. No other flying animal lands the same way as bats do.”

“When they come in to land they’re not moving very fast, which makes it hard to generate the aerodynamic forces needed to reorient themselves,” says co-author Kenny Breuer, also from Brown. “So the question is, how do bats get themselves in position to land?”

To find out, the team used a special flight enclosure and high-speed cameras to capture the bats’ action. The videos show that as the bats approach the ceiling, they retract one of their wings ever so slightly toward their bodies, while flapping the other at full extension. With each wing beat in that asymmetric configuration, the bats rotate a half turn, helping to put them in position to meet the ceiling feet first.

Additional computer simulations confirmed that this movement has much to do with bats’ heavy wings. Their weighty, hand-like assemblages of bone, muscles, joints, tendons, and skin given them extra weight to throw around. In very precise ways, bats generate inertial forces in order to reorient themselves, rather than relying on the aerodynamic forces generated by pushing against the air.

“What this tell us is that in bats, with their heavy wings, it’s the inertial forces that are more important relative to aerodynamics,” Breuer says. “That’s a bit of a counterintuitive conclusion. Normally you’d think that an animal would not want to have such massive wings. But here, it turns out that the mass can be used to some benefit.”

Could some forms of flight have evolved this way? “This work opens the possibility that additional insight into the evolution of flapping and gliding flight could be gained by better understanding of inertial dynamics in mammalian gliders,” the team writes. In addition, the researchers believe that this new understanding could influence human-designed flight. “From an engineering perspective, there’s a lot of interest in drones and flying microvehicles,” Breuer says. “Maneuvering or directing those robotic vehicles is a challenge. The idea here is that using redistribution of mass is not a bad approach to take.”

This batty anomaly could lead to better engineering!