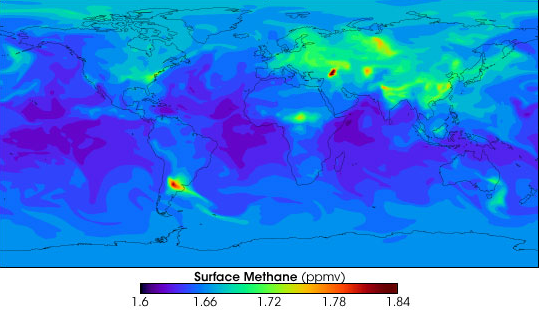 Carbon dioxide is often the bad guy—warming the world and acidifying the ocean. But it’s not the only bad guy; there are other pollutants humans release into the air that damage our planet. And halting the release of those chemicals might be the key in beginning to stop the Arctic melt and to limit sea level rise.

As glaciers and ice sheets melt and warming oceans expand, sea levels rise by about 3 millimeters annually (just more than one-tenth of an inch). If temperatures continue to increase, sea levels are projected to rise between 18 and 59 centimeters (7 to 23 inches) this century.

Carbon dioxide can last in the atmosphere for hundreds of years, so it will take centuries to feel the positive effects of any actions we take now to limit CO2—too late to protect many coastal communities on the front lines of sea level rise. However, other greenhouse emissions such as methane, tropospheric ozone, hydrofluorocarbons, and black carbon last for a far shorter time, anywhere from a week to a decade.

Previous research has shown that a sharp reduction in emissions of these shorter-lived pollutants beginning in 2015 could offset warming temperatures by up to 50 percent by 2050. Researchers at Scripps Institution for Oceanography, the National Center for Atmospheric Research (NCAR) and Climate Central decided to study how the same reductions in these pollutants might affect the rate of sea level rise. The team found that such cuts could dramatically slow rising sea levels—to an estimated 22 to 42 percent by 2100.

The research is published in Nature Climate Change.

“It is still not too late, by stabilizing carbon dioxide concentrations in the atmosphere and reducing emissions of shorter-lived pollutants, to lower the rate of warming and reduce sea level rise,” says co-author Veerabhadran Ramanathan of Scripps. “The large role of the shorter-lived pollutants is encouraging since technologies are available to drastically cut their emissions.”

Methane emissions can come from waste, agricultural practices and burning natural gas. Tropospheric ozone is often called the bad ozone and results from the interaction of sunlight with chemicals emitted by burning fossil fuels. Hydrofluorocarbons are emitted from refrigeration and air conditioning. And black carbon is basically soot—caused by diesel fuels and burning biomass like wood, a basic fuel source in many developing nations.

“It must be remembered that carbon dioxide is still the most important factor in sea level rise over the long term,” says NCAR’s Warren Washington, another co-author. “But we can make a real difference in the next several decades by reducing other emissions.”