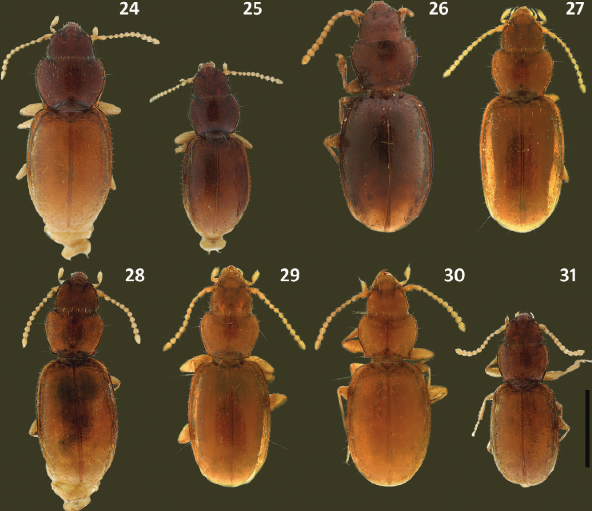 “They’re practically everywhere and they’ve been there forever, but we’re only just now learning about them.”

Academy researcher Dave Kavanaugh is talking about anilline beetles. At only two millimeters long (or less!), these carabids are found in lowland and highland elevations, from tropical islands to seemingly dry environments, hidden in the leaf litter and dirt. Just out of sight.

Mostly, it’s their size (“no bigger than the head of a pin”) that makes them difficult to find, Kavanaugh says. But there’s more to it than that. The beetles just hadn’t met their match, scientist-wise.

Enter Igor Sokolov, postdoc extraordinaire. To look at the morphology of one of these teeny insects (basically its form and structure) takes a steady hand to dissect and tediously compare each specimen under a microscope. “Igor is the only person I know who has good enough hands to do this work,” Kavanaugh says. And Sokolov is patient, too. After sifting through 150 specimens from six different institutions, including the Academy, Sokolov found a new genus and eight new species of the small carabids.

And that only covers the anilline beetles in the Oaxaca and Chiapas areas of Mexico. Remember how Kavanaugh explained they’re everywhere? Sokolov continues to use his skills to look at the teeny creatures found in southern Mexico, Honduras, Guatemala, and now, Texas.

“He’s studying the beetles living in caves in Texas,” says Kavanaugh. Today, caves are the only place these beetles are found in the state. However, soil samples from army ant nests and peach orchards from the early 1900s contain the insects. Kavanaugh wonders: Could it be that the beetles are escaping the ever-increasing heat by heading underground?

Sokolov will continue to sift through the leaf litter, soil and museum collections around the world to find out and discover more of the small insects, perhaps right under our noses.