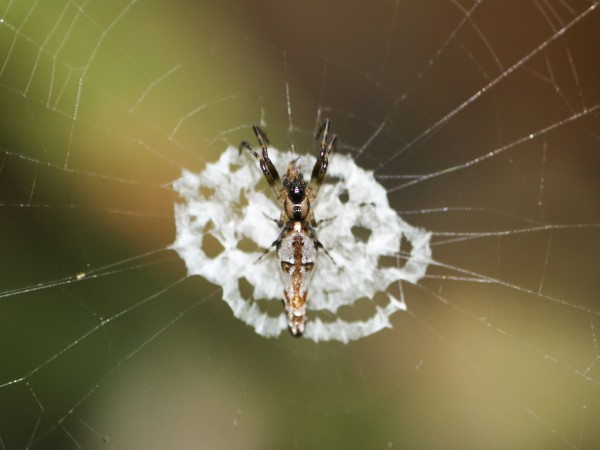 Meet Cyclosa ginnaga, the southeast Asian spider that fashions its web quite elaborately. This isn’t unusual—spiders throughout the world often decorate to attract prey to their webs.

A 2010 paper examined the web-design habits of these orb weaving spiders in more detail because they go above and beyond most spiders’ efforts, using not only their own silk to fabricate web adornments, but also making use of plant materials. The authors wondered if this extravagance helped to attract insect meals or, perhaps, to avoid predators? The scientists set up video cameras to observe the arachnids and indeed found the decorated webs “intercepted more prey.” But they saw no predation on either the decorated or undecorated webs.

Here’s the thing about these decorated webs: when the spider is sitting in the middle of one, the whole thing looks like bird poop. At least, to our human eyes. I-Min Tso, of Tunghai University in Taiwan, and his colleagues hypothesized that spiders’ worst predators, wasps, see the same thing when they look at the spider on its web. When wasps fly by, do they spot bird droppings and keep going?

The researchers measured 125 webs and 27 bird droppings (yuck!) and indeed found no “statistically significant difference” in size, according to their study, published last week in Scientific Reports. They also discovered that the orientation of the web design and the orientation of bird poop on leaves were both vertical. The contrast between the two—white webs on dark backgrounds and white droppings on green leaves—was also similar.

Moving away from the guano, the team ran experiments in the field, using video cameras to record almost 600 hours of footage of the spiders in their webs—some of them with their original coloring, some of covered in a carbon powder to obscure the illusion. The scientists observed wasp attacks were far greater on spiders that had either their webs or bodies blackened with the dark-colored powder than those who had their normal body coloring and webs exposed.

It goes to prove there’s no pride in good camouflage… If looking like poop improves chances of survival, then it’s a successful evolutionary strategy!