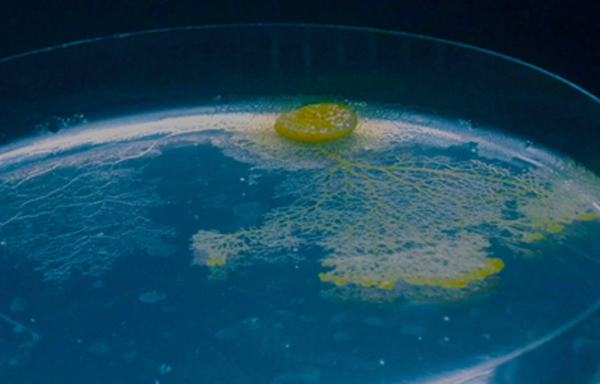 Memory typically resides within the brain, but what if an organism has no brain?

This is from an abstract in last week’s Proceedings of the National Academy of Sciences. In the study, researchers explain that slime mold has spatial memory, even though it’s a single-celled organism.

Slime molds continue to astound those of us with brains with their brainless abilities. In 2010, scientists found that slime mold was able to navigate through mock-ups of Japanese cities as efficiently as the Tokyo train system.

Now perhaps we know why. Scientists from Australia and France put the species Physarum polycephalum in petri dishes with a sugar treat inside. But the treat was blocked by an U-shaped obstacle that the slime molds had to navigate around.

These organisms, true to their names, leave a slimy trail behind as they move. These trails provide a record of where the slime molds have traveled. Instead of moving backward and following an older trail, these life forms always form new paths. And they don’t just do this with their own slimy trails—they’ll stay away from other slime mold trails as well.

In fact, the researchers tried this experiment with pre-existing slime mold paths etched into the petri dish jelly and without. With paths, the slime molds found the sugar treat almost every single time, within the experiment’s 120 hours (they’re slime molds—they don’t move very quickly). Without paths, only one third of the slime molds reached the treat.

As the researchers state in the study,

In complex environments… the use of an externalized spatial memory system greatly enhances navigational ability.

Want to learn more about this research? Ed Yong does a great job relating this to social insects and human hikers in Discover, and Wired has a time-lapse video of the slime molds successfully navigating the petri dishes.