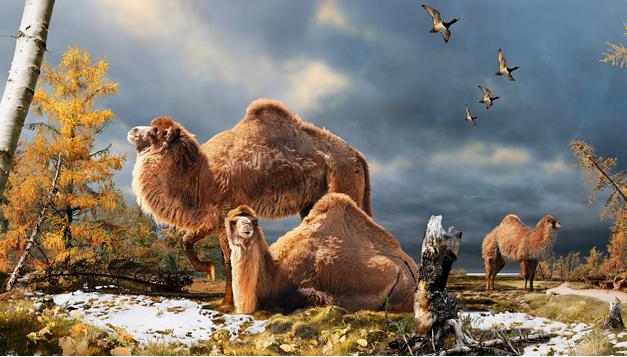 Camels haven’t always been restricted to Africa and Asia. In fact, they originated in North America! Now, new evidence suggests that one of their earlier ancestors lived in the Arctic.

During the mid-Pliocene, about 3.5 million years ago, Earth’s average temperature was 2-3°C warmer than current levels, and the Arctic was a whopping 14°-22°C warmer than the temperatures in this region today. Earth didn’t even have a polar ice cap! Covered in a boreal-type forest environment, not tundra, the Arctic nonetheless experienced long periods of chilly darkness. Doesn’t sound like camel country…

For several years, researcher Natalia Rybczynski of the Canadian Museum of Nature worked with colleagues to collect fossils on Ellesmere Island, the northernmost island in Canada. They recently discovered 30 bone fragments which researchers determined to belong to the tibia bone of an ancient mammal’s leg.

To determine the animal species to which the tibia belonged, Rybczynski and her team utilized a fairly new technique called “collagen fingerprinting.” Minute amounts of collagen, the dominant protein found in bone, were extracted from the fossils. Using chemical markers for the peptides that make up collagen, the scientists developed a collagen profile. They then compared this profile to those of 37 modern mammal species, as well as that of a fossil camel found in the Yukon.

The collagen profile for the High Arctic camel most closely matched those of modern camels, specifically dromedaries (camels with one hump), as well as the Yukon giant camel, which is thought to be Paracamelus, the ancestor of modern camels.

“We now have a new fossil record to better understand camel evolution, since our research shows that the Paracamelus lineage inhabited northern North America for millions of years, and the simplest explanation for this pattern would be that Paracamelus originated there,” explains Rybczynski. “So perhaps some specializations seen in modern camels, such as their wide flat feet, large eyes and humps for fat may be adaptations derived from living in a polar environment.”

Other researchers agree that the camels’ adaptations may hold Arctic originations. Christine Janis from Brown University is quoted in Science News saying:

Many camel characteristics, such as long legs for efficient walking and fat-storing humps, may be adaptations to living in environments like the Arctic, where food is sparse and distributed at distant intervals.

The study was published earlier this week in Nature Communications.